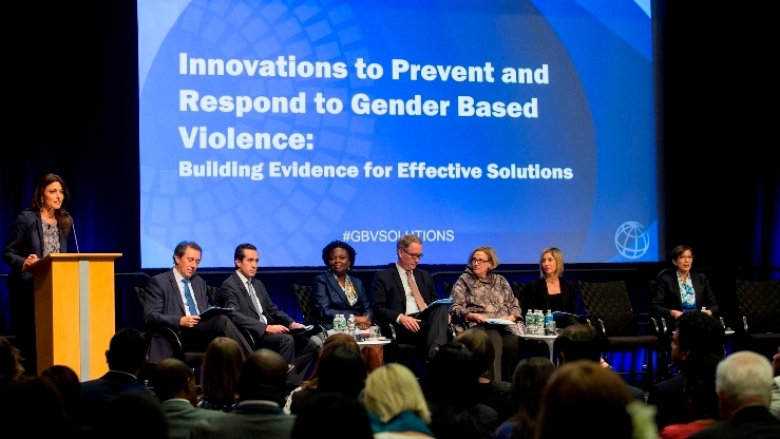 WASHINGTON, May 18, 2017 – The World Bank Group has renewed its commitment to preventing violence against women and girls, investing a minimum of $3.5 million over five years in innovations designed to prevent and respond to gender-based violence (GBV).

World Bank Group President Jim Yong Kim made the announcement at the Innovations to Prevent Gender-Based Violence awards ceremony during the WBG-IMF Spring Meetings. In partnership with the Sexual Violence Research Initiative, 10 teams were awarded a total of $1.1 million to support their GBV prevention and response projects and research.

“We cannot stand by while so many women suffer harm that’s completely preventable, but this is also an issue that goes right to the heart of our goals to end extreme poverty and boost shared prosperity,” Kim said, noting that the epidemic can cost countries as much as 3.7% of gross domestic product (GDP). “The World Bank Group is committed to help its client countries prevent gender-based violence.”

Using the Development Marketplace Crowdsourcing Method, Kim said the WBG is looking to the award winners’ research and tested projects to help advance that goal. The winning proposals include tackling sexual harassment on college campuses and on public transportation, addressing child marriage and an emerging form of GBV: cyber violence.

Cyber violence is pervasive, and women and girls are disproportionately affected, yet very little research exists on this problem especially in low and middle income countries, said award winner Pamela Lilleston, a social and behavioral scientist at the International Center for Research on Women, whose team project aims to develop a set of standards that will be tested in Uganda, and later used to inform effective cyber violence policies and programs.

Technology is at the core of another winning proposal designed to reduce intimate partner violence (IPV) in Dollo Ado refugee camp in Ethiopia. The research project aims to explore the use of podcasts to disseminate information about inter-partner violence, and generate new knowledge on the use of technology-based solutions to GBV in humanitarian settings.

“Podcasts we think are an interesting solution in this context because they can be broadcast in safe environments such as health facilities and so on, but they can also be downloaded there on simple mobile devices and shared person to person,” said awardee Vandana Sharma, a public health researcher based at the Harvard TC Chan School of Public Health. “We will be training men and women in the communities in digital storytelling and in podcasting, and they will develop the content themselves in the local language with messaging that’s appropriate for their contexts.”

Awardee Renzo Peña, co-founder and vice president of DB Peru, a healthcare NGO, said his team’s project is in response to the concerns of the Amazon Basin community of Peru, which reports high rates of violence with no resources to address it. Recent figures show that 79% of women between 18 and 29 report experiencing sexual violence at some point in their lives. As a result, the first primary preventative strategy for GBV in the rural region of the Lower Napo River, was developed. It is also the first community mobilization project of its type in Peru, and Peña said he plans to share his research throughout the region.

“We have been working for 15 years in the region, and we work very closely with the leaders in the community who will be trained so they can bring that knowledge to their own communities, and thus be able to prevent and eliminate violence in the communities themselves,” he said.

Awardee Emma Fulu, founder and director of The Equity Institute, said despite data that show that Solomon Islands has one of the highest rates of violence in the world, it is still the most under-researched regions. Her team project focuses on prevention of GBV by researching root causes and social norms that contribute to violence against women and girls by developing the Solomon Islands’ first community-led, locally developed comprehensive violence prevention program.

“Because of the high rates of violence, we know we need to look at how to stop violence before it starts, trying to understand what are the root causes, what are the social norms that are really underpinning violence against women in this region,” Fulu said. “I think what’s really exciting about this particular project is that it’s filling a number of major evidence gaps, not just in the Solomon Islands or the Pacific, but really globally.”

“Of course we have learning on response and how we help and work with survivors, but the most important learning is on prevention,” she said. “Without prevention, we can’t ever solve this particular problem, so bringing people together to experiment, to test, to learn is really critical.”