Centers of Excellence: Revolutionizing the poultry production chain in West and Central Africa

LOMÉ, May 15, 2017-Although it is home to 13 percent of the global population, Africa provides just 4 percent of the world’s poultry products. The average African eats one egg every five or six weeks, while the average Japanese person eats eggs almost daily. The same holds true for poultry meat consumption. In one year, the average African consumes only 3.3 kilograms of poultry meat, compared to 28 kilograms for the average French person, and 14 kilograms worldwide. Poultry products remain a luxury in many sub-Saharan African countries, despite substantial animal protein needs.

The Regional Center of Excellence in Avian Sciences (CERSA) of the University of Lomé in Togo is seeking to reverse that trend. Established in 2014 under the World Bank-financed African Centers of Excellence Project, CERSA aims to revolutionize the poultry industry in West and Central Africa. “Rather than viewing these shortcomings as a problem, they should instead be seen as an opportunity, because we are seeing that there is enough room to take the industry forward,” enthused Professor Kokou Tona, the Center’s director.

Professor Tona believes that a lack of adequate financing, the dearth of high-level technical expertise, and input-related problems are the three factors hobbling the development of Africa’s poultry sector, noting that poultry feed accounts for 70 percent of poultry production expenses. “Even chicks are imported because this is showing us that we haven’t yet mastered large-scale production of these chicks, as egg transportation costs are prohibitive, almost double the cost of the eggs themselves,” explained Professor Tona.

In a bid to curb this dependence on other countries and address these challenges, CERSA is offering three levels of training to produce:

These university- and post-university-level programs—which are unique in West and Central Africa—are already drawing students from many countries. After just one year in operation, CERSA has 12 doctoral students and 50 Master’s level students, who hail from Benin, Côte d’Ivoire, Gabon, the Gambia, Chad, and Togo. Cognizant of the potential of the poultry sector in their respective countries, these young people have opted to engage in research to revolutionize this industry.

For Dassidi Nideou, a doctoral student from Chad conducting research on “the impact of parent stock feeding on the performance of broiler chicks,” the paucity of poultry products in his native country undoubtedly influenced his decision to pursue studies at CERSA. “In Chad, we produce and export a lot of red meat. But we rely heavily on other countries for poultry products and modern poultry breeding is still in its early stages.” In his view, developing the industry in Chad is critical, if it is to help vary the diet of the majority of the Chadian people and meet their animal protein needs. “I decided to come to CERSA because it is the only center in the subregion that offers this type of training and because of the quality of the training program that combines theory with practice.”

His fellow students, Kolani Ali and Voemesse Kokou, are conducting promising research on, respectively, the inclusion of palm oil and moringa in poultry feed. “Red oil contains twice as much energy as corn. My initial experiments revealed an increase in the average weight of the eggs, better coloring of the egg yolk, and improved animal feed efficiency,” explained Ali.

“The chickens that consume moringa are bigger and that’s a good thing when you know that the egg-laying rate also depends on the weight of the animal. The hens that were part of my research started laying earlier and at a much faster rate than the others, and their eggs are bigger and the yolk has a better color,” noted Voemesse.

CERSA is relying on these research studies to obtain practical results that can be applied daily by breeders and producers. “Reducing the share of poultry feed expenses in total expenses would make poultry farms in our countries more productive and competitive,” said Professor Tona.

The general consensus is that the sector holds promise. However, expertise is needed to ensure its success, and those who currently work in this sector must acquire professional qualifications. To that end, CERSA is offering short-term practical training programs. “We have already trained more than 300 technicians who work in the poultry production chain: the feed mill, chick production, table egg production, broiler production, etc.,” he added.

However, more needs to be done to modernize and industrialize poultry farms in West and Central Africa to ensure food security. To live up to its ambitions, CERSA has taken steps to forge (and continues to forge) strong partnerships with universities in Africa and elsewhere to promote research and knowledge sharing. It has also formed strategic partnerships with key players from the private sector and major manufacturers to promote the industrialization of the sector.

This approach has caught the attention of the World Bank. “I am very impressed with the work being done at CERSA, which is truly responding to the needs of the African people. A research center like CERSA will increase chicken productivity and availability in our countries and will also allow people to have access to these products, which are regarded as a luxury in Africa,” noted Makhtar Diop, World Bank Vice President for the Africa Region, during a visit to the Center at the University of Lomé in April 2017.

CERSA is one of 22 World Bank-financed centers of excellence in West and Central Africa for the promotion of science and technology. “There is no better way, in my view, of giving a boost to African economies, creating jobs, and supporting research than to train young graduates in highly sought-after fields such as chemical engineering, agronomy, science, and technology,” Mr. Diop added.

CERSA: A Regional Center in Full Swing in Lomé 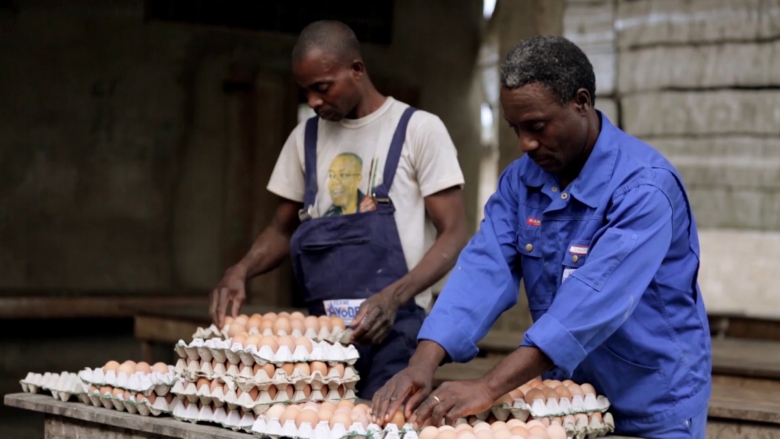 Employing a Scientific Approach to Poultry Farming in Togo