Adwoa Adezawa: The Young Woman and the Sea 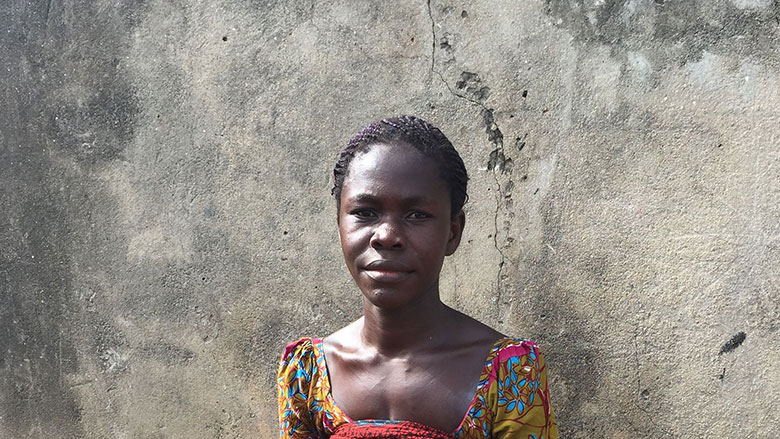 Adwoa Adezawa sits with her baby girl outside the courtyard where she cleans and processes fish.

MOREE, March 22, 2017—Throughout West Africa, women are often called the “invisible fishers” and their significant roles in the fishing industry mostly go unmeasured. And yet, it is becoming increasingly clear that women quietly dominate the sector—even if they don’t go out in boats.

Adwoa Adezawa is a fishmonger in Moree, Ghana. She is 20 years old and has two children under the age of four. She stands on the fringes of a community meeting of fishers with her baby on her back, rocking the little girl gently. After listening to the fishermen speak about the problems with illegal, unreported, and unregulated fishing, she speaks up.

“I work with other fishmongers from my village. Together, we clean, smoke, and sell fish. When fish is plentiful, I can feed my family and still have enough to sell and make some money.”

Adezawa shows off a sprawling courtyard where many women congregate. It is a lively meeting place where women clean, filet, and process fish. The villagers do not have access to refrigeration, so they salt or smoke the left over catch.

Each woman has a different role. Some wait for the morning boats to come in and work the rest of the day. Others collect mussels, oysters and other shellfish but are not counted as fishers or factored into the sector when governments account for gross domestic product (GDP). Women also handle the finances related to fishing, and manage the household because their husbands are at sea for days. Sometimes, they even pay their husbands to work.

When asked what would help her the most, Adezawa responded quickly. “What would change my life? A freezer where I can keep my unsold fish. We are the ones who get the fish to everyone.”

For Adezawa’s fishing community, as well as much of West Africa’s coast, there is an arduous journey ahead toward sustainable fishing and recovered stock. Adezawa and her peers are far from alone. Globally, the current level of overfishing by commercial fleets is one of the epic environmental problems of our time. According to the World Bank report, The Sunken Billion Revisited, because of overfishing, global fisheries forego $80 billion a year.

Yet, there is some good news.

Tangible progress has been made in some West Africa countries such as Guinea-Bissau, Liberia and Sierra Leone, where illegal fishing has decreased due to better governance and improved surveillance systems. Women are now included in the co-management of fisheries with the support of the World Bank-funded West Africa Regional Fisheries Program (WARFP), South West Indian Ocean Fisheries Governance and Shared Growth Project (SWIOFish), United States Agency for International Development (USAID), and other efforts.

“There have been tremendous improvements in assuring that the fisheries sector benefits communities, improves livelihoods, and contributes to the economy,” said Berengere Prince, Senior Natural Resources Management Specialist and WARFP team leader.

West Africa’s waters have long been known as some of the most productive fishing grounds in the world, and fish were bounteous in the decades after independence, from the 1960s until about 2000. Today, trends have reversed with fishers racing to the bottom of emptying seas.

“The day we manage our fisheries well, we’ll have better lives,” Adezawa said, turning her head toward the slumbering child sleeping on her back.