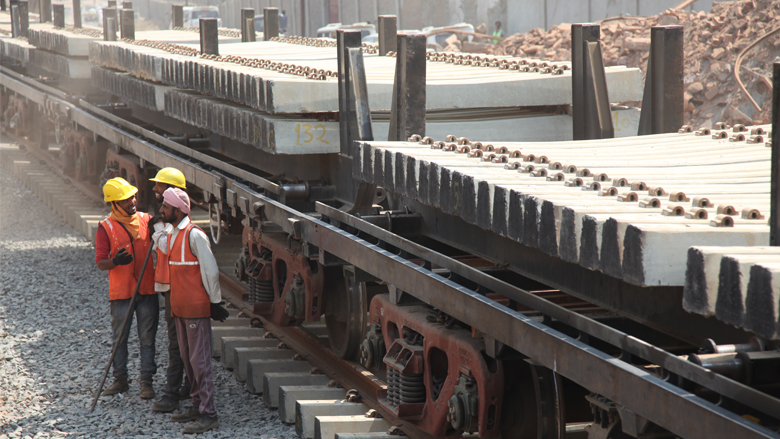 Across the world, moving freight by rail is cheaper and greener than sending it by road. But in India, it is slow and unpredictable.  And costs are amongst the highest in the world.

Indian Railways has been losing market share to road transportation because of inadequate infrastructure and poor services, exacerbated by the need to fit freight trains into busy passenger service schedules. As a result, most of India’s passengers and the bulk of its freight goes by road. Today, 90 percent of India’s passenger traffic and 65 percent of its freight uses road transportation. And these shares are growing.

Now, the Indian Railways is building two world-class freight corridors that will transform the way goods are transported along India’s busiest routes. Given India’s energy security issues and escalating concerns about traffic accidents, congestion and the greenhouse gas (GHG) emissions associated with road transport, these efforts will help increase the share of rail transportation in the country.

The dedicated freight-only lines are being built along the four key transportation routes – known as the Golden Quadrilateral – which connect Delhi, Mumbai, Chennai and Kolkata.  These corridors carry the country's heaviest rail traffic and are highly congested.

About 2000 km long Eastern Corridor will pass through Uttar Pradesh and Bihar, bringing jobs and much-needed development to some of India’s poorest regions.  The World Bank is financing about 1,200 km of the Eastern Dedicated Freight Corridor (Ludhiana - Kolkata) through a series of three projects: Khurja – Kanpur (EDFC I, 390 km); Kanpur – Mughal Sarai (EDFC II, 402 km); and Ludhiana – Khurja (EDFC III, 401 km). At completion, the program is expected to more than double the Indian Railways’ freight carrying capacity along the corridor.

The new electrified freight-only railway lines will allow trains to haul higher loads faster, cheaper, and more reliably than before, enabling the railways to make a quantum leap in their operational performance.

The Railways are using state-of-the-art technology and modern management and procurement approaches on a scale that is unprecedented in independent India. Construction is proceeding in accordance with internationally tendered ‘design and build’ contracts that put greater stress on compliance with schedules and budget than the traditional time and materials contracts used in the sector. For the first time in the country, rails of a quarter kilometer long are being laid using the latest automatic track laying machines.

The DFC lines are being built for maximum speeds of up to100km/h compared to current average commercial freight speed of about 25 km/h. The lines will also have a carrying capacity of 6,000 to 12,000 gross ton of freight trains at 25-ton axle load at opening, but designed to enable migration to 32.5 ton axle load later on. Apart from a reliable service, which is critical for freight customers, the DFCs will allow much shorter transit times from freight source to destination. And in some cases reduce the delivery time to more than 50 per cent. 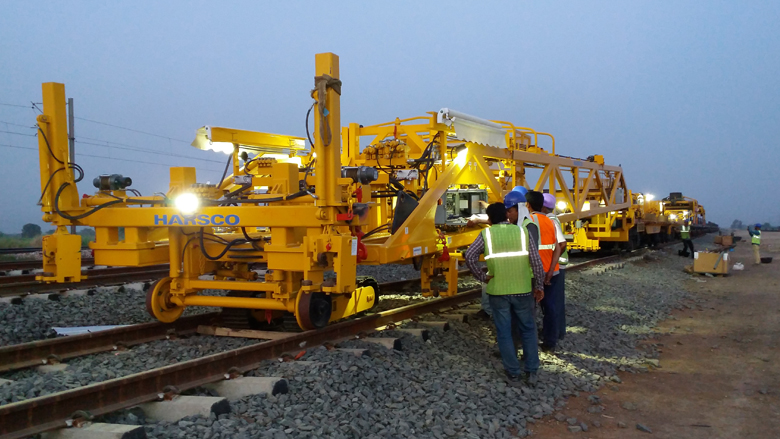 " By freeing the freight from the main lines, it will help boost passenger rail service, which will contribute to efficient urbanization within this big corridor, which is really important because we know that urbanization drives poverty alleviation in India " 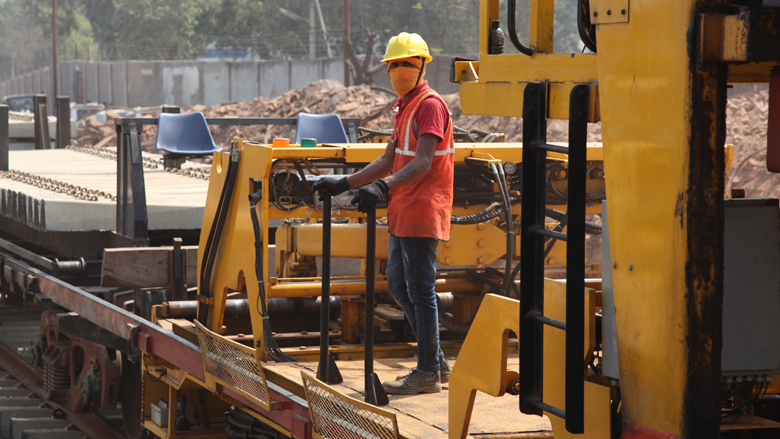 All three World Bank projects under the Eastern Dedicated Freight Corridor (EDFC), amounting to US$2.72 billion are at different stages of implementation. Most of the major procurement contracts under EDFC 1 and 2 have already been awarded.

In addition to construction of the freight corridor, the project is also supporting the Dedicated Freight Corridor Corporation of India Ltd (DFCCIL) to strengthen its institutions. This includes research and development, long term commercial and marketing plan, approach to non-discriminatory access, safety on the tracks, locomotives and wagon specifications, pilot projects on energy optimization and freight logistics, and skill enhancement among others.

The economic gains being envisaged are also huge. These innovative freight-only corridors will make it much cheaper, faster, and more reliable to move goods between the industrial heartland in the north and ports on the eastern and western coasts.

At present nearly 90 percent of Indian Railway’s freight is dominated by ten bulk commodities.  With increase in DFC capacity and a faster and more reliable transit, Indian Railway will have the potential to attract new markets to rail in higher value freight sectors greatly underrepresented in railway freight at the moment.  This will catalyze economic development in Uttar Pradesh by driving the establishment of industrial corridors and logistics parks along the route. It is expected that the corridor will make industries more competitive, manufactures will be able to meet the tight delivery schedules demanded by export markets on time, and the Make in India initiative will receive a boost.

The project will benefit the critical power and heavy manufacturing industries in the northern and eastern states through which the corridor passes. These industries rely heavily on the railways to carry their raw materials and take part of their finished and semi-finished goods to both domestic markets as well as to seaports on the eastern seaboard.

By transferring freight to dedicated freight-only lines, congestion on existing railway tracks in the lower Ganges basin will ease, improving passenger rail services. The region is one of India's poorest and most densely populated and its citizens rely heavily on rail transport for affordable travel.

“By freeing the freight from the main lines, it will help boost passenger rail service, which will contribute to efficient urbanization within this big corridor, which is really important because we know that urbanization drives poverty alleviation in India", said Benedict L.J. Eijbergen, Program Leader, Economic Integration, and Atul Agarwal, Senior Transport Specialist and Task Team Leaders for the projects.

The DFC is a green project as by shifting freight from road to rail it will reduce fossil fuel usage and energy consumption in India's transport sector. The corridor will operate entirely through electric locomotives, reducing carbon emissions significantly.

In fact, a carbon footprint analysis conducted by the Indian Railways finds that the DFC will generate 2.25 times less greenhouse gas emissions over a 30-year period compared to business as usual.

The experience gained in implementing a project of such magnitude and complexity will enable the Indian Railways to create one of the largest freight operations in the world. 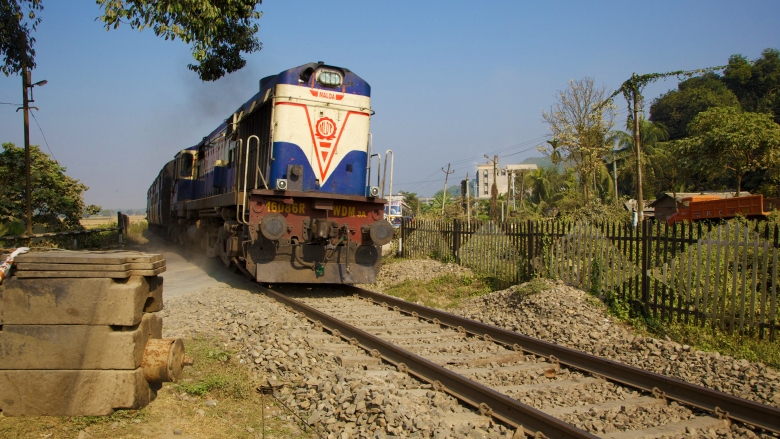 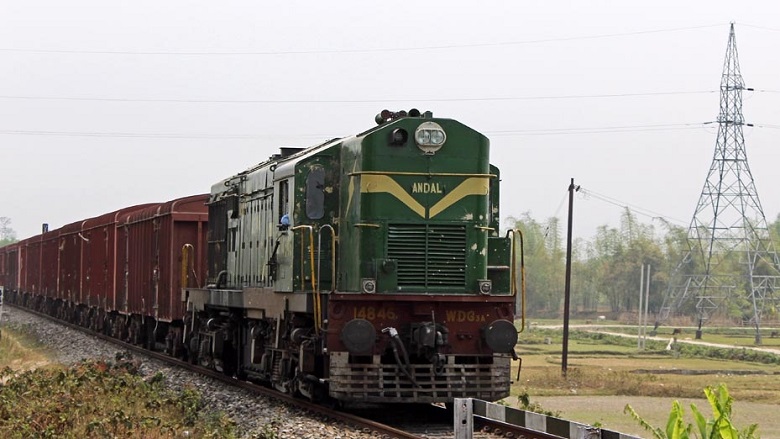