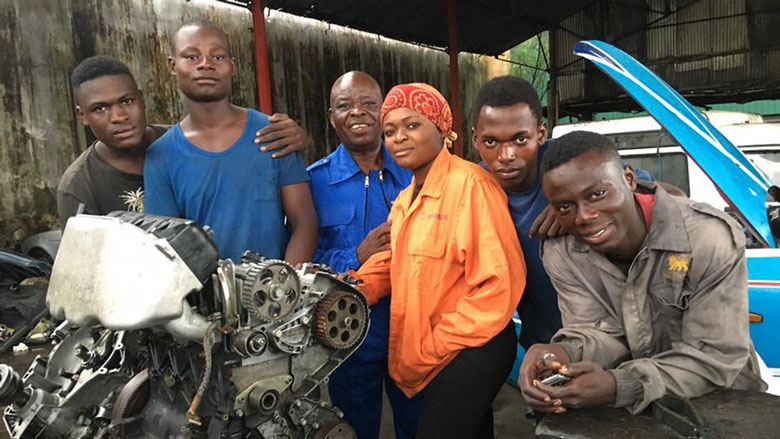 Hairdresser, car mechanic, soap maker, welder…Vulnerable youth in the Republic of Congo are benefiting from vocational skills that allowing them to pursue new career paths and restore their self-worth. 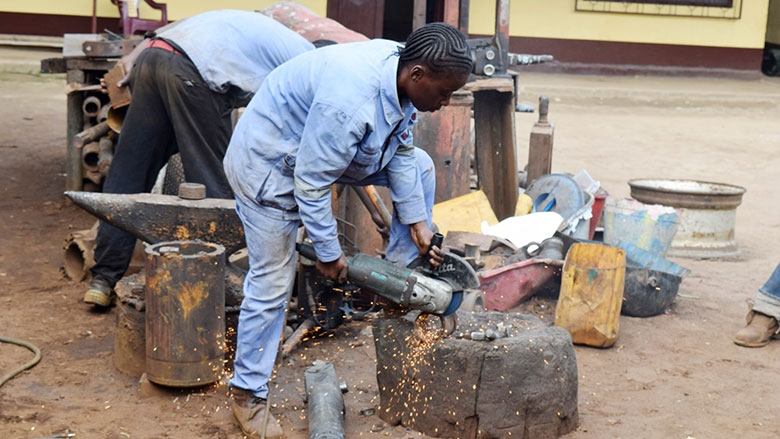 Calm and focused, with the grinding wheel grasped tightly in her hands, Mercia KOUBAKATIKOU cuts the piece of metal she is steadying with her left foot, sending sparks flying into the air around her. Not entirely sure why, this young 21-year-old Congolese woman had always wanted to become a welder. The Skills Development for Employability Project (SDEP), financed jointly by the World Bank and the Republic of Congo, gave her the opportunity to receive training along with two other young women and two young men in a welding shop in Makélékélé, Brazzaville’s first arrondissement. At the end of 10 months of training, not only does she not regret her choice, she encourages other young women her age to join her. “In life, there are no professions reserved especially for men. Anything a man can do, a woman can do as well,” asserts Mercia. 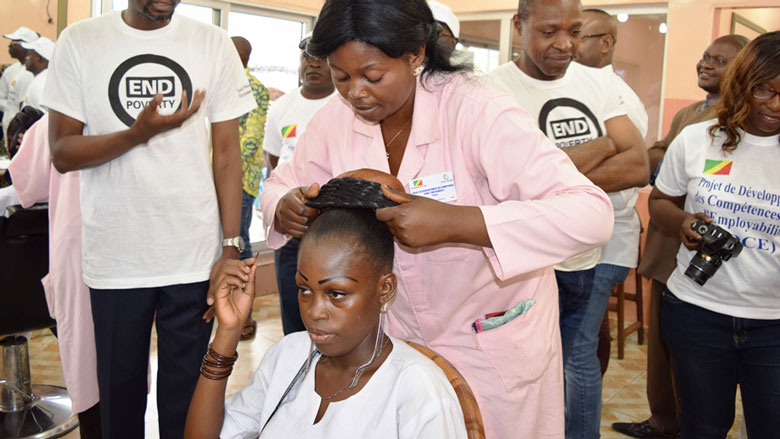 Watching her work, it’s not hard to imagine that she was “born with a comb in her hand.” Chignons, blow-drying, and braids hold no secrets for Christelle BATANTOU, who was recently trained as a hairdresser. At 23, this young Congolese woman, who had all but given up on herself when she dropped out of primary school, is outwitting fate thanks to the SDEP, which offered her an apprenticeship contract along with eleven other young women in a hair salon in Moungali, Brazzaville’s third arrondissement. “After this training, my goal is to open my own hair salon, and I’m hoping to find the resources I need to finance my project,” confides Christelle. 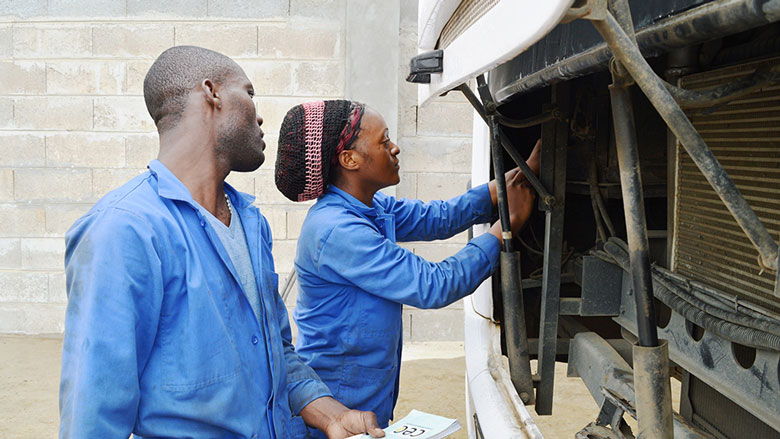 “Do you see that signal?” Jonathan BOUANGA enthusiastically asks Djibrilla Issa, World Bank Country Manager in the Republic of Congo, who is visiting an automotive services learning workshop on the occasion of the International Day for the Eradication of Poverty. “The computer is telling me what is wrong with this car.” With the help of the SDEP, which offered him an apprenticeship contract along with nine other young Congolese in a shop in Ouenzé, the fifth arrondissement in northern Brazzaville, this 17-year old is today combining his passion for computers, which he previously used only for entertainment, with a profession usually considered “dirty” and fit only for those who failed in school. “Automotive services today are not what they used to be,” Jonathan affirms. “These days, many trades have modernized and it is up to us to catch up by developing our skills.”

Coming from disadvantaged backgrounds, these four young people have been receiving vocational training for nearly a year under the Skills Development for Employability Project (SDEP). Heading down different career paths, they currently share the same dream of becoming skilled workers in growth sectors in order to facilitate their entry into the labor market. They are proof that the Republic of Congo and the World Bank were right to invest in the vocational training of young people so as to provide the country with human capital capable of making a real contribution to its growth and development.

Alongside these apprenticeship contracts, the SDEP also provides business management training for young entrepreneurs. Charlyse MOUYABI is one of the 80 young micro-entrepreneurs who have received training from the project. 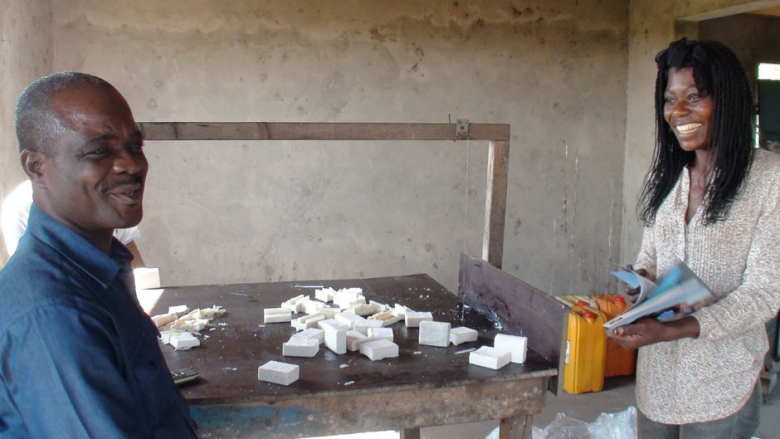 It was in a garage in Ngoyo, in the sixth arrondissement of Pointe-Noire, the economic capital of the Republic of Congo, that this young Congolese woman of 36 started her micro-enterprise for the artisanal production of vegetable oil and soda-based white soap. Created three years ago, this small company produces each week around 200 bars of soap weighing about 150 grams, which she personally delivers to her customers. “My dream is to have a real, international-caliber soap factory; I hope my perseverance will pay off,” she says. “What has changed for me since I was trained is that I now do my own accounting. That’s something I didn’t do before,” Charlyse explains.

Implemented in 2014, the SDEP seeks to promote the acquisition and strengthening of job and entrepreneurial skills for vulnerable young people living in urban environments, to facilitate their entry into the labor market and improve their incomes. Thus far, the project has already trained approximately 1,474 vulnerable young people and will eventually (within five years) train 15,000 more in Brazzaville and Pointe-Noire in various occupations such as sewing, baking, laying tile, home help, electricity, and carpentry. The project also aims to build the management capacities of young micro-entrepreneurs aged 18-39 by giving them access to various types of training.

“In light of the project’s encouraging results and the keen interest shown by youth, the Congolese government would like to extend the project to the entire country, in order to benefit between 100,000 and 150,000 vulnerable young people,” affirms Djibrilla Issa.

With total financing of $32 million, including $10 million from the World Bank and $22 million in government counterpart funds, the SDEP offers a second chance to vulnerable young people who left school too early, by giving them the opportunity to acquire real skills and be competitive in the labor market.