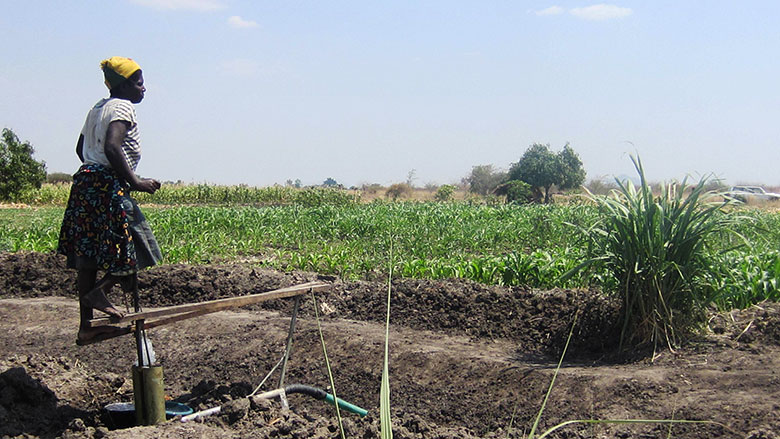 LILONGWE, November 29, 2016 - The January 2015 seasonal rainfall, which was the highest on record for Malawi, caused floods that left just over a million Malawians in the southern part of the country distraught, displaced, and without any way to make a living.

“The challenge was how to start with nothing,” said Joseph Bauleni, who lost his farm to the floods. “Left with no food, it was difficult for us to raise capital for farm inputs, let alone irrigation equipment. The floods emergency recovery project came to our rescue.”

Bauleni is from Balaka District, one of the 15 rural districts in the country affected by floods, where smallholder agriculture and household enterprises are the main sources of income. The districts are on their way to recovery courtesy of the Malawi Floods Emergency Recovery Project (MFERP) funded by the International Development Association (IDA), the World Bank’s fund for the poorest countries.

Through the MFERP’s Inputs for Assets (IFA) and cash-for-work program, people such as Bauleni received much-needed agricultural inputs such as seed and fertilizer, and cash for other needs. In exchange, beneficiaries reconstructed and rehabilitated infrastructure essential for public service delivery and economic recovery of affected communities. By November 2016, about 1,400 hectares of irrigation schemes, 480 hectares of afforestation, and just over 1,500 km of roads had been restored or rehabilitated through IFA, benefitting 81,097 people.

The project has also distributed 4,460 treadle pumps to affected districts with irrigation schemes. The communities have organized themselves into groups by irrigation scheme, which they work through to restore their livelihoods.

“We are encouraging irrigation in order to beat natural disasters and climatic hazards,” said Mr. Ezekiel Luhanga, MFERP’s monitoring and evaluation coordinator for the Eastern Region of the country.

Bauleni’s son, 17-year old Mavuto, is ecstatic at the prospect of going back to school because of what he has reaped through the Titamande Scheme to which his parents belong.

“I dropped out of school in Form 3 due to lack of school fees,” said Mavuto who lives in Bakala District with his family. “After a year of helping my parents, I was allocated a fifth of a hectare whose maize harvest I sold and set aside proceeds to be used as school fees,” he said. Mavuto said he has now planted a second phase from whose sales he will reach the K300,000 (about $420) he needs to go back to school.

Mavuto was also able to contribute part of his harvest to meet his family’s food requirements and to the irrigation scheme grain bank. The grain banks are the community’s way of saving for future rainy days, providing food security for all affected communities.

This was further strengthened by the government’s procurement of 52,600 metric tonnes of maize for the national Strategic Grain Reserve through MFERP at a cost of $15 million.

“From this very same scheme, our food situation has changed,” said Mary Paulo, one of 110 members of the Titamande irrigation scheme. Despite the threat of natural disasters, Paulo said that the community is no longer at risk of starving because they can produce crops an average of three times per year, and members are now better financially resourced to build better houses, buy household property and send their children to school.

The MFERP also supports the construction of dykes to provide physical protection to the communities from future flood waters. With a goal of building 30km of dykes, 15kms have been built with support from the project, protecting 86,000 people from flooding along the Nkombezi River in Chikwawa District, and Likangala and Thondwe Rivers in Zomba District.

As part of restoring agricultural livelihoods and ability to access markets and trade, the project also repaired flood-damaged roads and bridges to disaster resilient standards. Bailey bridges, concrete bridges and drainage structures have been completed in the districts of Mangochi, Salima, Balaka, Nsanje, Phalombe, Zomba and Thyolo. Further, education and health facilities are being reconstructed using the “building back better” concept.

In addition to the $80 million MFERP, the World Bank’s IDA continues to support Malawi recover and build resilience against future weather related shocks through the newly approved Malawi Drought Recovery and Resilience Project (MDRRP) with a grant of $104 million, and the Strengthening Safety Nets Systems Project (SSNSP) - Malawi Social Action Fund (MASAF) IV with a grant of $47.68 million and a credit of $22.32million.