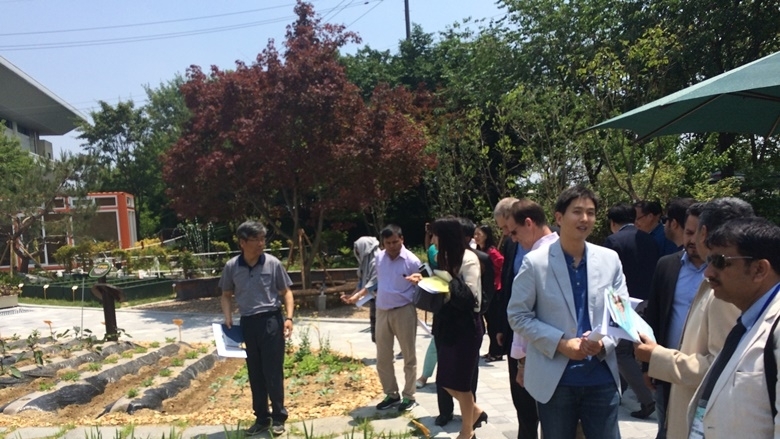 A week-long knowledge exchange program recently organized in Korea by the World Bank proved that Korea’s classic community-driven development (CDD) program Saemaul Undong has much to offer to conflict-affected communities as they try to strengthen citizen participation, improve basic services, and reduce poverty.

Sponsored by the Korea Trust Fund for Economic and Peace-building Transitions (KTF), the Knowledge Exchange on Rural Community Driven Development in Fragile and Conflict Affected Countries brought together 14 government representatives from five conflict-affected countries: Afghanistan, Kenya, Myanmar, Nepal, and the Philippines. For one week these participants learned about and discussed potential approaches to improving their own community development efforts based on the implementation experiences and results of Korea’s Saemaul Undong.

The event, hosted by the Korea Development Institute School of Public Policy and Management, brought together experts from universities and other institutions who presented different perspectives on Korea’s economic transformation through the lens of Saemaul Undong.

“The administrative support provided by a strong Ministry of Home Affairs, and holistic support from most line ministries, all coordinated by a comprehensive structure at central and sub-national levels, were key to the success of the program,” explained professor Jeong-Seop Choi from Mokpo National University.

The participants learned that while Saemaul Undong had strong central direction and local government involvement and support, villages and villagers themselves took responsibility for defining specific community-level activities under the program, as is done under CDD operations. Similarly, Saemaul Undong specifically aimed to empower women in rural areas by increasing their active participation and giving them the opportunity to be community leaders.

“Under Saemaul Undong, female farmers overcame poor economic conditions, and a traditional patriarchal system that was based on Confucianism, and realized important increases to their income, improvements in their living environment and role in society,” stressed professor Kap-jin Chang from the Saemaul History Institute.

Another key factor in Saemaul Undong’s success was the government’s strong support in areas such as research, development and extension of agricultural technology. A visit to the Agriculture Technology Center of Sejong Metropolitan Authority provided participants with a first-hand glimpse of local government-led research and extension service that included support for urban farming, organic farming technologies, and machinery rental services.

As much as the program was learning about Korea’s experience, it was also about South-South knowledge exchange between the five countries. According to Susan Wong, World Bank Global Lead for Community Driven Development, “the program was specifically designed to allow participants to share their experiences and to discuss how CDD programs have evolved with the changing needs and risks in their countries, and to learn from one another how to resolve some of the challenges faced when scaling up CDD programs and approaches.”

The event ended with a morning of reflection by each delegation on their key take-aways from the visit, and actions to be taken to incorporate some of the Saemaul Undong principles into their programs, or to continue the knowledge exchange effort with identified Korean experts.

“A strongly motivated leadership at the top level of the administration and consistency in commitment is necessary for the successful implementation of CDD programs,” said the Afghan and Nepal delegations. Both countries also noted their desire to further collaborate with Korean experts and other countries to implement the concept of women’s clubs in their countries, to learn more about farmers’ cooperatives, and to share community training materials.

The Nepali delegation also noted the important role of land reform, drawing on cultural practices, and the performance based approach applied under Saemaul Undong, which they saw as critical to the success of the program.

Such reflection and identification of follow-up actions was very much in keeping with the expectations expressed by the Korean Ministry of Strategy and Finances Director of International Finance Division, Joonkyu Park, in his opening remarks at the outset of the program, where he underlined the importance of the event as an opportunity for the participating countries to promote agriculture and rural development in their countries by drawing upon Korea’s knowledge and experiences.