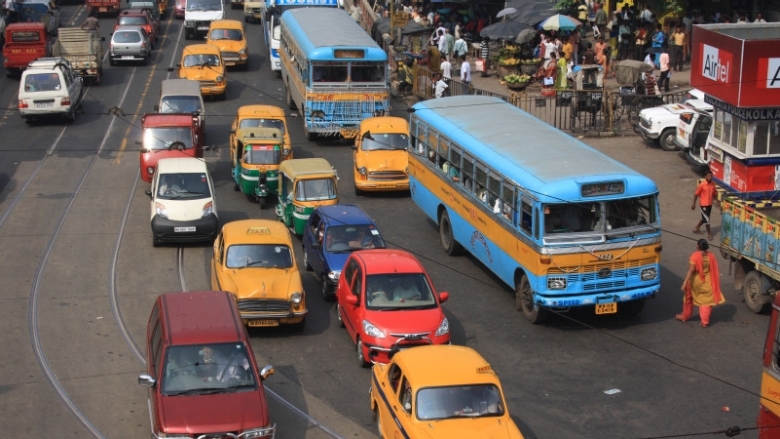 What are the top words that come to mind when you hear about a city like Kolkata?

Perhaps you think of Mother Teresa, extreme poverty in slums, India’s palaces and rich cultural heritage, or the city of joy.

What few realize is that Kolkata (formerly known as Calcutta) was a powerful world trade and financial center during the British Indian Empire (British Raj) and the capital of India until 1911, not least because of its great location and transport connectivity potential.

The city, located near the Bay of Bengal in the north east of the country, sits on the banks of the Hooghly River, a distributary of the Ganges. It is considered the country´s cultural capital and the commercial hub of Eastern India. Kolkata is also a major river port –the oldest one operating in the country- and the third most populous city in India, with some 15 million people living in its metropolitan area.

With an extensive network of mostly unconnected transport modes, however, the city faces huge challenges and opportunities to more effectively connect its roads, buses, rail, tram, metro and water ways to provide more integrated transport modes and services for its millions of commuters and massive volumes of freight.

Helping address these challenges and opportunities is what the World Bank and other partners are aiming to do through the Kolkata Metropolitan Urban Transport Integration Project.

At first glance, the objective of this technical assistance project is to assist the Government of West Bengal to develop a strategy for better integrating its various transport modes:  by maximizing accessibility -to and within the Kolkata Metropolitan Area- while minimizing the carbon footprint of both passenger and freight transport.

Improving modal integration in a climate-friendly way, for example, can be achieved by facilitating a seamless transition between modes for commuters; improving public transport accessibility, fostering transit oriented development, and most importantly improving last mile connectivity.

Dig a bit deeper, and the project is really supporting the government’s vision to make Kolkata a more competitive city in the 21 century. This means, among other things, optimizing the utilization of its various modes of transport, including river transport, so these complement each other and improve the efficiency of the distribution process.

“The integration of transport modes is absolutely essential for Kolkata,” says Rakhi Basu, the task team leader for the project. “We have really gotten into the DNA of the city to fully understand its genetic code and underlying characteristics, as well as challenges and opportunities.”

As the government builds more metro lines, revisits its waterways options and recovers the metropolitan area for pedestrians, Basu explains, the role of transport in strengthening the city’s commercial function and relationship with the port is also being examined. In fact, the extension of the Eastern dedicated freight corridor (also funded by the World Bank) to the port and the construction of an all-weather port are expected to effect a fundamental shift in the role of transport.

Bringing the Hooghly River back into the city, for example, and improving port-hinterland connection is key for optimizing the use of its waterways for both passenger and freight. And the benefits can go beyond the metropolitan area by also strengthening regional connectivity.

This technical assistance project aims to provide the necessary tools, analysis, and practical experiences to facilitate the integration of all modes of transport and improve access for millions in Kolkata’s metropolitan.

To tackle the various challenges, the World Bank is bringing together experts from other transport agencies through innovative partnerships supported by various donors, including the Korean Trust Fund and AUSAID which have been essential in supporting this project.

“Policy makers want to hear from other successful policy makers,” says Karla Gonzalez, the World Bank’s practice manager for South Asia. “We are bringing knowledge that is relevant and practical for our clients, and cities like London and Seoul can share valuable lessons with Kolkata, and also learn from it.”

The exchanges with experts from the two cities are already delivering some positive outcomes.

Within six months of the engagement, for instance, Kolkata has opened up its public transport data as buses are now fitted with GPS and their movement can be tracked in real time.  The open data will allow start-up companies to develop apps that can help commuters access various modes of transport services in a more efficient manner, which ultimately can help ease congestion on the roads.

The twinning arrangement has also resulted in the design of a multimodal terminal which will be developed where three major metro routes and other bus routes converge.  Other Indian cities have already expressed their interest in also learning from London and Seoul.

Transport for London Director, Shashi Verma, is one of the experts supporting these exchanges.

“Learning from London can help Kolkata short-circuit some of the difficult policy development processes that other cities have gone through,” Verma explains. “We are delighted to share with Kolkata what we have learnt during the radical transformation of London’s transport over the last two decades.”

And as the Principal Secretary of Transport Alapan Bandyopadhyay recently told the media following a meeting with various experts: “We were twin cities in an age of Empire, but though that age is gone, in terms of architecture of reform we do need to learn from each other.”