Laying the Foundation for Sustainable Development in South Sudan 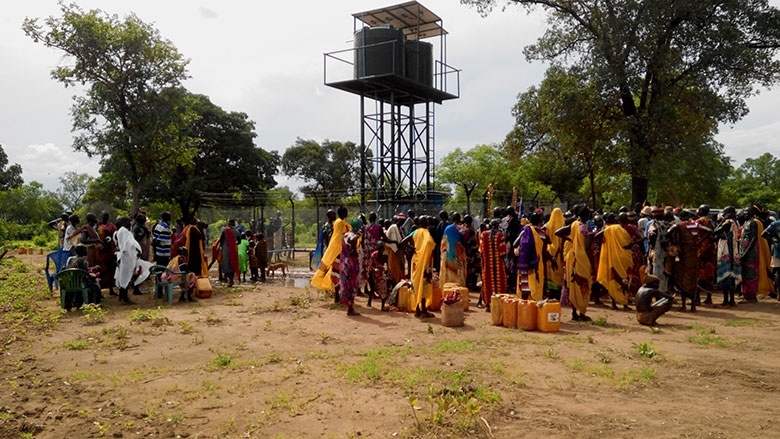 New boreholes for clean water is just one of the ways the Local Governance and Service Delivery Project has helped communities in South Sudan.

WESTERN EQUATORIA STATE, February 24, 2016 – Just like any other day, medical workers at the primary health care center (PHCC) in Ibba are busy attending to clients. Several people including women, children and the elderly are patiently waiting their turns. The facility provides much needed medical services including basic maternal and child care to approximately 75 patients a day.

“We are very grateful for the rehabilitation and expansion of the health center,” said Mbori Undo, a client from Ezo. It has benefited everyone, especially pregnant women and children.”

The center was rehabilitated in 2015 with block grants from the World Bank-funded Local Governance and Service Delivery Project (LGSDP). Since its launch in 2013, LGSDP has helped to build or rehabilitate 29 community infrastructure projects, including schools, clinics and construction of boreholes, in 37 communities. In the next fiscal year, an additional 252 community projects across 23 counties in seven states are expected to be implemented under the project.

“We had suffered for a long time before LGSDP brought water here; we used to fetch water from a village four hours away,” Agok Telar Akech, a housewife in Aban Payam in Lakes State said of a recently-completed borehole. “Now we can focus on other work such as farming.”

Over the past two years, the project has played a key role in supporting government efforts to put in place local government systems, support regular fiscal transfers and provide basic services to the most underserved communities. This is helping to advance the country’s development, which has been held back by internal conflict and complex socio-political dynamics.

“This project combines the more conventional community-driven development approach with local government strengthening in an attempt to build a sustainable system of local service delivery,” said Zishan Karim, World Bank task team leader for the project.  “The LGSDP will help county governments to better carry out their mandated roles while also providing tangible benefits to their citizens.”

One of the features of LGSDP is a focus on citizen engagement. For the first time in the country’s history, local governments are asking communities to have a say in their own development priorities and fully involving them in the planning, implementation and supervision of local development activities. This has helped promote ownership of community assets and build trust between local governments and communities.

“This is the first project in our village for which we were asked what our needs were,” said, one of the beneficiaries of the project. “We needed clinics, better schools and roads. We thank the government for giving us what we asked for.”

With project support to community institutions, the Boma and Payam development committees also have the potential to contribute to peace and reconciliation efforts in the country. These committees are being trained to serve as platforms for conflict management at the local level.

“This project was the first International Development Association intervention in South Sudan and is important for both the World Bank and the government,” said Sahr Kpundeh, World Bank country manager for South Sudan. “With its focus on local governance, providing basic services and peace building from the bottom up, the project has the potential to help the country break out of the cycle of conflict over the long term.”