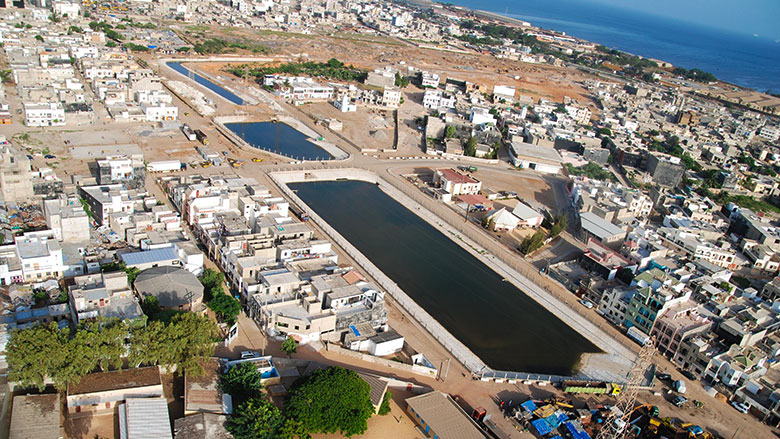 An aerial view of the drainage works in the Dakar suburb of Dalifort. Over 18,000 residents no longer face the threat of floods come the rainy season.

DAKAR, February 3, 2016—When heavy rains pounded Dakar in 2009, the residents of Cite Soleil, a neighborhood in the suburbs of Dakar, were up to their chests in water. Six years later, one can still see traces of where stagnant water leveled off at up to 1.5 meters.  Residents vividly recall the putrid smell of rainwater mixed with sewage, and the frequent cases of dysentery and headaches that plagued their children.

“During the rainy season, nightly storms would keep up from sleeping as we were forced to constantly remove water from our bedrooms. It was exhausting and the water was damaging all of our personal belongings as well as our health,” lamented Fatou Gningue, a resident of Cite Soleil.

" During the rainy season, nightly storms would keep up from sleeping as we were forced to constantly drain water from our bedrooms. It was exhausting and the water was damaging all of our personal belongings as well as our health. " 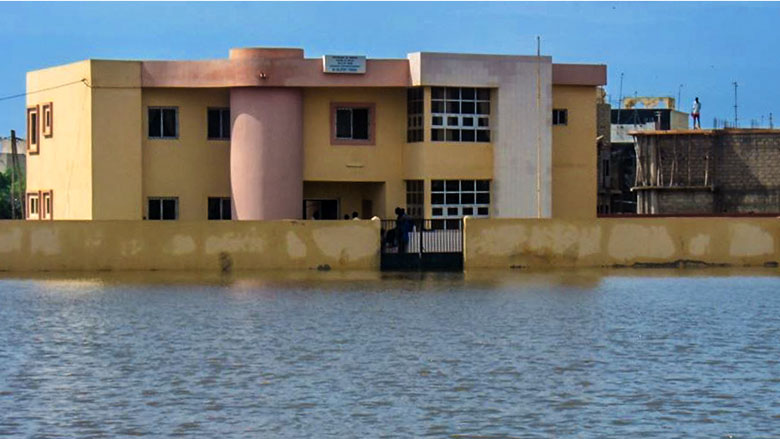 Severe floods plagued the neighborhood of Dalifort prior to PROGEP’s intervention.

Flooding in Senegalese cities such as Dakar, Saint-Louis, and Kaolack has become commonplace with the rise of urban sprawl. As poor rural populations began to settle in peri-urban areas, many of which were prohibited construction zones, they developed neighborhoods without drainage canals, sewage systems, or urban planning. In addition, buildings, roads, and other infrastructure obstructed the means for water to evacuate to the ocean during the rainy season. Combined with the risks of extreme weather conditions brought on by climates change, such as the heavy rains in August 2012 which dumped 156 millimeters of water in two hours, the situation became ripe for disaster.

In fact, the 2012 floods proved to be catastrophic, resulting in loss of life and a severe deterioration of public and private infrastructure in Dakar’s suburbs. Public services such as schools, health systems, running water, and electricity were also significantly impacted, most of which were suspended for several days due to water damage and lack of supplies.

This disaster also resulted in a turning point in Senegal’s flood risk management with the government’s adoption of a Decennial Flood Management Program which totals 700 billion francs CFA ($1.4 billion). In an effort to scale up the necessary funding for this crucial program, the World Bank stepped in and contributed up to $90.6 million through the Storm Water Management and Climate Change Adaptation Project, known more commonly in Senegal as PROGEP, the French acronym for Projet de Gestion des Eaux Pluviales et d’adaptation au changement climatique.

Thanks to support from the Global Facility for Disaster Reduction and Recovery (GFDRR), the Senegalese government along with the World Bank and other partners were able to conduct a post disaster needs assessment (PDNA) following the 2009 floods that laid the groundwork for PROGEP’s implementation.

“PROGEP is supporting this ambitious program through institutional capacity building, urban planning, construction of priority drainage infrastructure, wetlands management, community engagement in flood risk reduction, waste management, and climate change adaption. Reinforcing all of these areas is the key to a lasting solution that will improve the lives of Dakar’s suburban population,” explains Isabelle Celine Kane, Disaster Risk Management Specialist at the World Bank in Senegal.

Within two years, what were once polluted flood-prone neighborhoods ringing the outskirts of the capital, are now clean, dry zones that have resisted rainy season after rainy season. Drainage works and the construction of two reservoirs carried out through the project in Dalifort and Thiourour, two suburban zones of Dakar, are protecting 18,500 people and 105 hectares from future floods.

Over the course of 2014 and 2015, the completion of an expansion of these drainage works ensured that almost 100,000 people and more than 400 hectares were protected from what was another exceptional year of precipitation in 2015. In the second phase of the project, two additional reservoirs in Yeumbeul and Mbeubeuss, in the Dakar suburb of Pikine, are set to be built in 2016.

These drainage works were conceived not only to address excess rainwater, but also rising ground water levels, another key cause of Dakar’s suburban flooding. Thanks to a new network of canals, ground water and storm water alike are evacuated all throughout the year.

However these public works are only as good as the maintenance that is invested in keeping them clean and clear, as canals clogged with refuse can no longer perform their designated function. With the help of PROGEP, an institutional and financial viability study for the exploitation and maintenance of these drainage works is currently being finalized to ensure the sustainability of the investment over the long term. Furthermore, Senegalese authorities are drawing up the country’s first urban plan that explicitly maps out all the zones at risk of flooding and those which are under land use restrictions in the municipalities of Pikine and Guediawaye. Reoccurring floods in the suburbs of Dakar are soon to be a thing of the past.