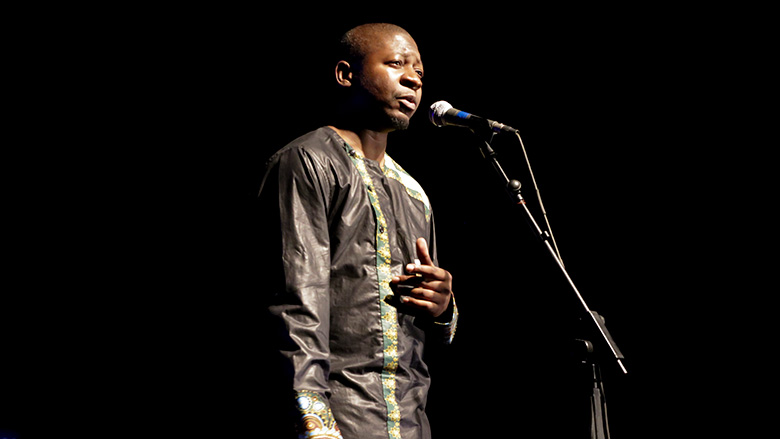 Poet Qabaniso Malawezi perfoms at the recent End Poverty Competition, where hundreds of Malawians shared their thoughts and solutions to end poverty in the country.

LILONGWE, December 9, 2015 -- Malawians say they are tired of being poor and are no longer mincing words about how their own actions, mindset, and leadership can redirect the country to prosperity.

Hundreds of citizens recently expressed these views and possible solutions through essays, poetry, paintings, cartoons, and photographs as part of the World Bank’s End Poverty Competition to commemorate 50 years of partnership. Of the nearly 1300 entries received, 32 citizens received awards, selected by independent panels of judges drawn from throughout the country.

“The main challenge before us is the persistence of poverty, said Laura Kullenberg, World Bank country manager for Malawi, during the 50th anniversary event in November. “Malawi is just not winning this battle yet, with 70% of its population living below the poverty line.”

A broad view of Malawi’s development since 1995 shows that growth rates have been low, and the country remains an outlier even compared to its peers that were at a similar stage of development in 1995. Currently, Malawi is one of the 10 poorest countries in the world, and the global call to end poverty is a powerful sound that is shaking to the core young and old, leader and led, and, the country’s long term development partners.

“A key question that everyone ought to ask, particularly in leadership is, where did we go wrong and how can we get it right?” said Malawi’s Minister of Finance, Economic Planning and Development, Honorable Goodall Gondwe during the event.

Malawian Weston Kusani combed through the country’s history for answers to include in his winning essay.

“Our real enemy is ourselves and our wasteful utilization of the available resources, be it is at the personal, household or national level,” he said.

Malawians further spoke of corruption, appetite to import just about anything instead of manufacturing locally, uncontrolled population growth, and failure to implement development plans as examples of what went wrong, and which continue to exacerbate poverty.

Malawians such as Chikondi Dziko also cited political leadership which is focused more on retaining power than developing the country, which she described as “a game of fortunes.”

Ignorant embrace of democracy was also identified by citizens as a major problem. Whereas democracy would be considered a positive catalyst for development, there are some who believe that this may not have been the case in Malawi.

“Democracy does not mean we should be unruly and destroy our own country,” said Cecilia Banda, in her essay. Her observation was complemented by Vincent Nkhoma’s essay, who said, “Democracy arrived without any sort of guidance as to what was expected of the citizens in the new political dispensation.”

Solutions to make the poverty clock start ticking for the better pointed to transformation across the political, economic and institutional arenas.

In his essay, Winston Mwale called for consistent implementation of home grown development blueprints over time to facilitate sustainable transformation. Many contestants lamented short-term thinking; “political leaders have a habit of not implementing long-term plans because the benefits may not be felt during their presidency,” Emma Kishindo said in her essay entry. Many called for greater unity where all political leaders, work together to end poverty and achieve long term national goals. Malawians such as Stan Kaunda also propose that government should reduce over dependence on foreign aid, which he said could cause leaders to feel more accountable to donors than the citizens. Malawi’s “long term economic marriage with tobacco” was also cited as something that needs to change.

After 50 years the World Bank continues its partnership to help Malawians win the war against poverty, said Kullenberg.

“We stand ready to continue our long partnership and run with Malawi to a place we hope is not too far in the distance, where citizens have grabbed hold of their future and changed their destiny, where Malawi is on the move and has left poverty behind,” she said.