Ending Poverty in a Rising Africa 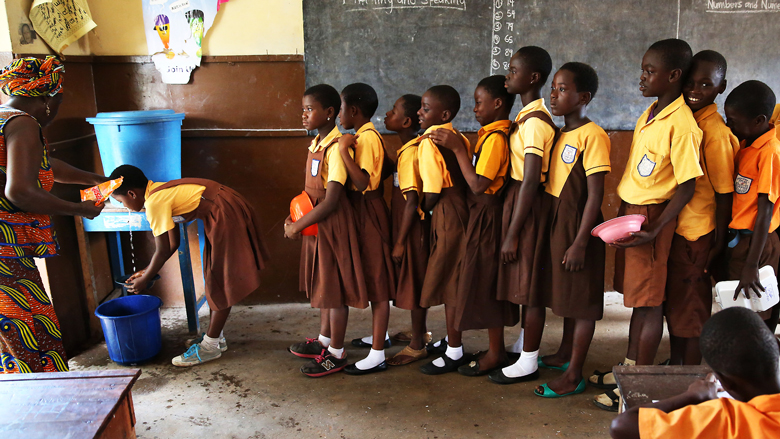 Students line up to wash their hands before eating at Kanda Estate Primary School in Accra, Ghana. Many children in the country depend on the hot meal given to students in most of Ghana’s government-funded primary schools. © Dominic Chavez/World Bank

The dramatic drop in global poverty over the last two decades has been called the “best news in the world today” by World Bank Group President Jim Yong Kim. But in sub-Saharan Africa, the story is mixed.

World Bank estimates show that the rate of extreme poverty fell in the region from 56% in 1990 to 43% in 2012. The continent’s population, however, increased at a fast pace, so there are actually more people – an estimated 63 million more – living in extreme poverty in Africa today than in 1990, as population growth outpaced the impressive economic and social forces that reduce extreme poverty.

A new World Bank report, “Poverty in a Rising Africa,” shows that these numbers don’t tell the whole story of a region that has seen strong economic growth in the last couple of decades and made great progress despite many challenges. The report focuses on the quality of data to track well-being – finding that poverty might have fallen even below 43% by 2011 when data quality and comparability is taken into account.

Data is sparse and inconsistent across the region and globally – 21 countries in Africa did not have at least two surveys with which to track poverty. It’s a situation that must change to improve the world’s ability to end extreme poverty by 2030, said Kim, in launching a new initiative to step up data collection in 78 of the world’s poorest countries.

The World Bank Group announced Oct. 4 that, for the first time, the number of extremely poor people is projected to drop below 10% of the world’s population in 2015 – to about 700 million people, down from about 900 million in 2012. The news bolsters efforts by the Bank Group and its 188 member countries to effectively end extreme poverty by 2030.

“We will not be able to reach our goal unless we have data to show whether people are actually lifting themselves out of poverty. Collecting good data is one of the most powerful tools to end extreme poverty,” said Kim, before visiting Ghana to recognize the country’s progress in tackling poverty just ahead of End Poverty Day on Oct. 17.

People still live without running water, toilets, electricity, and enough food to eat, even on the outskirts of one of Africa’s most modern and prosperous cities – Accra, Ghana. But here, as in many places in Africa, a social support system is emerging to help the poorest people cope.

Sarah Cofie, 48, and her 84-year-old mother receive bi-monthly cash payments from the national program to assist the country’s most vulnerable – the elderly, single mothers, and people with disabilities. It’s just enough to allow a household of seven to eat three meals a day, and for Cofie to set up a micro-business selling items from a cart in front of their home. 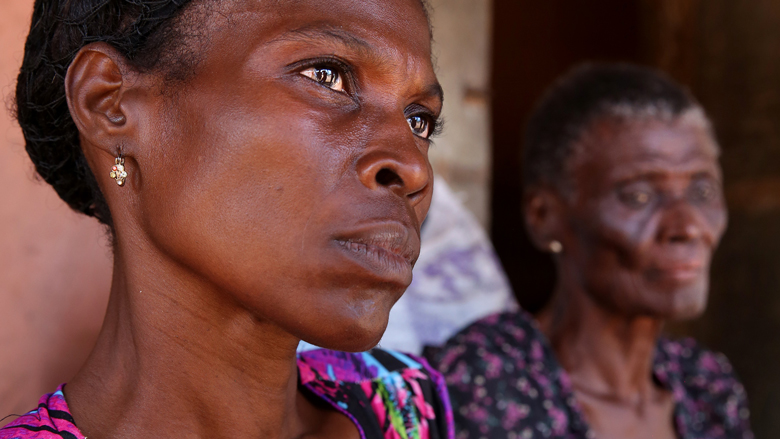 " We will not be able to reach our goal unless we have data to show whether people are actually lifting themselves out of poverty. Collecting good data is one of the most powerful tools to end extreme poverty "

In the country’s impoverished north, small children often come to school with their older siblings for the hot meal given to students in a majority of Ghana’s government-funded primary schools, according to Victoria Kuma-Mintah, the deputy national coordinator for the Ghana School Feeding Program.

Ghana, a lower middle-income country of about 26 million people, cut poverty from 53% in 1991 to 21% in 2012. It is one of a handful of African countries that met the Millennium Development Goal of halving extreme poverty by 2015. Today, about 2.2 million people in Ghana are extremely poor – living on less than $1.90 a day.

Few countries in Africa can compare with Ghana’s successes in improving energy access and education, and reducing poverty and malnutrition, said Vasco Molini, senior economist for the Bank Group’s Poverty Global Practice. Ghana’s achievements are “really remarkable,” he said. “They’re not just an episode, but a long-term trend." Some data points:

Ghana also has some of the best data in Africa – four national household surveys have been done since 1991, said Kathleen Beegle, lead author of the Rising Africa report.

Nat Amarteifio, the mayor of Accra from 1994 to 1998, said he witnessed the dawning of a new Ghana during his term, starting with the privatization of radio. Radio stations soon proliferated and citizens took the opportunity to raise their voices about city services, and the lack of them.

“This made a huge difference in how we ran the city. We had to become more inclusive,” said Amarteifio.

One of the most pressing is the lack of consistent and reliable electricity. “Dum-sor” is a popular expression used when talking about the country’s routine power cuts. The blackouts have a tangible impact on businesses’ bottom lines across Ghana – a concern for a country that’s working toward a modern economy.

“We never know how many times the power will go off,” says Nora Bannerman-Abbott, who owns Sleek Garments in Accra. “There are never any warnings, and we’re trying to compete in international markets.”

In the past nine months, Blue Skies – a popular fresh-fruit company located outside of Accra – has incurred costs of more than 1.25 million cedis ($330,000) to run diesel generators during power shut-offs.

This is a challenge faced by manufacturing enterprises across the region, which experience power outages frequently. Countries in sub-Saharan Africa lose 2.1% of gross domestic product from blackouts alone.

This also affects young people who are working to become the next generation of innovators and entrepreneurs. “Studying is hard in low light,” says Nana Ama Koffiah Commey, a 20-year-old student at the University of Ghana.

Despite the challenges, Ghana is far ahead of the regional curve in increasing access to energy. Ghana has one of the highest electricity access rate in sub-Saharan Africa

Ghana is also developing a natural-gas project, Sankofa, which is expected to fuel up to 40% of the country’s currently installed generation capacity with cleaner, more affordable resources. The World Bank Group is providing $700 million in guarantees for this project, which will allow Ghana to reduce oil imports by 12 million barrels per year and carbon emissions by around 8 million tons over five years.

This won’t solve all of the country’s energy constraints, but improving the availability of clean-energy supply is one of many steps that the country is making to improve the opportunities for the poorest citizens, says Molini.

Ghana’s School Feeding Program has expanded since its launch in 2005, and now operates in 4,700 schools across the country, providing a nutritious lunch for 1.7 million young children.

“This is the best meal they receive all day,” says Kuma-Mintah. “Because of the program they are in school, learning, instead of running around looking for food.”

What’s clear across the country and across the socioeconomic spectrum is that Ghanaians are looking for more opportunities.

“People want to be entrepreneurs,” said Commey of her fellow students at the university. “They are interested in finding alternative ways to make a living.”

Molini says that Ghana has the potential to be an economic hub in the region, particularly given its strategic location on West Africa’s Gulf of Guinea, infrastructure, and educated workforce.

Says Fatahu Salifu, co-founder of Dignity-DTRT garments in Accra, “We are not a social story – yet. The will to do something is there. If people have the right opportunities, they will work hard.”