MISUNGWI, July 29, 2015 – Under the generous baobab shed in front of her house along the dusty road running through Inonelwa village in Misungwi district, Anna Mayanda is busy serving tea and mandazi to her customers. Across the road, Scholastica Said manages her small kiosk stocked with tomatoes and small silver fish, while her nine-year-old granddaughter plays outside the kiosk under her watchful eye.

In Bugumangala village near the roadside town of Nyanguge, Magu district, as Antonia Mudo has left someone in charge of her thriving tomato business while she collects water for cooking at home. Almost 1,000km farther south in Kihesa village, Kilolo district, Alatufisa Msemwa takes an easy stroll from her home to the water point some 30 meters away, balancing an empty water container on her head.

As routine as the activities these women are engaged in may seem, they were not a part of their lives just two years ago. Theirs is a new lifestyle that no longer revolves around distances and difficulties entailed in collecting water, thanks to newly-commissioned projects in their areas that have brought safe water closer to their homes.

“At the peak of the dry season when we would be forced to go as far as Imagi or Ipambasilo, you would sometimes find yourself forced to sleep right at the source as the water would be coming in a trickle,” says Msemwa. “Considering you have come a distance of more than eight kilometers, going back home without any water would seem like a huge waste of time and energy.”

Over the past two years, the Government of Tanzania has embarked on a renewed drive under its Big Results Now (BRN) initiative to provide water access to 15.4 million rural residents, a 75% increase, by the end of 2015. The ongoing Tanzania’s Water Sector Development Program, financed by the World Bank and several other development partners, serves as a vehicle for successful implementation of the initiative.

Residents such as Mudo benefit from the Nyanguge-Muda piped scheme that was completed in February 2015, and is already providing relief during its current testing stage. Mayanda and Said are some of the 3,500 beneficiaries of the new piped scheme in Inonelwa, which was completed in July 2014.

“I had no bicycle, so I would leave the house at 5 a.m. to go to collect water, sometimes as far as Nyangege which is six km and I would get back after 9.00 a.m.,” said Mayanda, who is in her 40s. “That is when I would start other chores. We were happy only during the rainy season and when it ended, life became very difficult.”

Today, within the three hours in the morning that she used to spend walking for water, Mayanda is able to do all her usual chores; collect water across the road from her house, tend to her garden, and run the kiosk at her house where she earns up to Sh15,000 a day selling tea, chapatis and mandazi.

“Life has changed,” said Mayanda. “It is easier when you have water close by. I have more time now to attend to my business. That is the water over there that I use for my business. It is from a borehole but my customers have not complained about its taste. They like the tea.”

Msemwa and her husband have always worked hard to be able to raise the Sh2.4 million per year needed to take their five children through private school. They grow sunflower and maize on four acres located 10km away from home. They also have 10 cows, eight donkeys, 12 pigs with almost 30 piglets and many goats, all watched over by a herdsman.

Until last year, ‘free time’ was a nuanced concept for Msemwa, for that is when she also made bageeya, a fried chickpeas delicacy, for sale.

“In the past, I made just enough bageeya to sell in the shortest possible time because leftovers would go to waste as nobody would touch them the next day,” she explained. “Now I’m able to make and sell more bageeya because I have more time to sell it.”

The newly-constructed Kivi group water scheme which is sourced from Mgale stream in the Selebu Mountains, was handed over to community in August 2014 and is meant to benefit 6,400 residents of Kipaduka, Ikuka, Vitono and Iwungo – the four villages comprising the long form for ‘Kivi’.

With a domestic point just outside her house today, Msemwa, like her neighbors, goes to fetch water at her own pace.

“It feels great just being able to take your time planning what you want to do,” she says. “In the past, you did everything else only after making sure you had the water you needed for that day.”

None of these women know each other, but their story is one that has become familiar to Joseph Mhumba, the Kilolo district commissioner since commissioning several water projects in his jurisdiction.

“Water is everything,” Mhumba says while inspecting a newly added water point at Kihesa. “It is a priority before all else. Once water is sorted, it is a matter of time before everything else falls in place.” 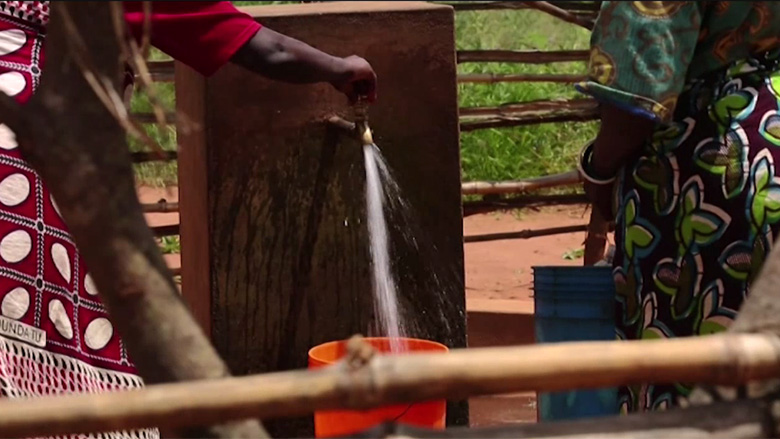