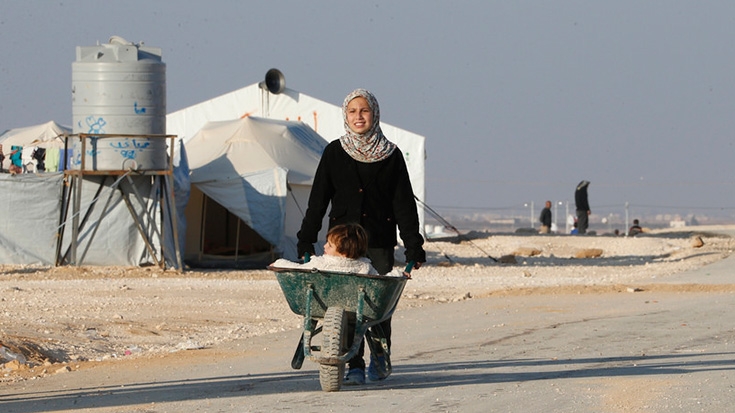 World Bank Group President Jim Yong Kim has a message for the Middle East and North Africa:  Despite the enormity of the challenges, the region can find a way out of its crises.

Kim is visiting Saudi Arabia, Lebanon, and Jordan for four days, during which his main messages will be about the importance of partnerships, good governance, transparency, and jobs for women and youth.

Four years after the Arab Spring, the region is at a crossroads. Conflict is ongoing in Syria. Millions of people have fled into neighboring Jordan and Lebanon, and now those countries struggle to fund their public services. Several other countries in the region are in political transition or recovering from conflict, and most need to improve education, adapt to climate change, improve governance, tackle inequality, and reduce unemployment.

But there are nascent signs of hope. Tunisia, where the Arab Spring began, bitter political rivals put aside their differences earlier this year and ratified a new constitution that adopted the principles of pluralism. In Yemen, the National Dialogue brought together the full range of political parties, civil society, women and young people. The gathering for the first time had a significant representation of women – 30 percent of the group.

“I visit the Middle East at a moment of tremendous challenges,” said Kim. “I am optimistic, however, that a brighter future for the next generation is within reach.”

He said the World Bank Group is working with development partners to “provide all the necessary support at this critical juncture.”

That includes financial commitments, which have been steadily growing in recent years and now stand at $16 billion in the region. New commitments in fiscal year 2014 (July 1, 2013 to July 1, 2014) are close to $5 billion. The Bank has also been sharing the lessons learned from its work around the world on how to turn a vibrant private sector into an engine of inclusive growth, and the role good governance and transparency play in creating effective and accountable institutions.

And the World Bank Group wants to strengthen partnerships with Saudi Arabia and Arab development funds to improve trade and transport within and between countries, and to scale up support for countries undergoing political transitions, among other initiatives.

Saudi Arabia contributed $3.25 billion to support Yemen’s transition process, and also co-hosted (along with the United Kingdom) the “Friends of Yemen” – a  group of countries and intergovernmental organizations that came together to assist Yemen during the transition process.

Another focus of Kim’s visit is to affirm the World Bank Group’s support for Jordan and Lebanon, which have taken in close to 2 million Syrian refugees.

In Lebanon, roughly one quarter of the population is now Syrian. A World Bank assessment of the impact estimated that GDP dropped 2.9% a year between 2012 and 2014. In addition, over that time, 170,000 Lebanese fell into poverty, the unemployment rate doubled to above 20%, and total economic losses in both public and private sectors were estimated at $7.5 billion.

In both Lebanon and Jordan, the refugees are putting an extra strain on services such as water and electricity, waste disposal, primary education, and health, as well as bringing increased competition for scarce jobs.

To help Lebanon, the Bank created a Multi-Donor Trust Fund for grants from donors and partners.  Norway has already contributed, and France and Finland recently made pledges, with other donors expressing interest. The Bank has contributed $10 million from the State and Peace Building Fund.

For Jordan, the Bank provided rapid financial assistance of $150 million in July 2013 to help the country cope with the influx of refugees. An additional $60 million grant was made in October 2013 by the Bank and a number of development partners including the United Kingdom, Canada, Switzerland, and the Arab Fund.  An additional $250 million was approved on March 13, 2014.

The UN made its largest-ever humanitarian appeal for $6.5 billion for 2014 to support aid organizations’ response to the massive humanitarian needs in Syria and neighboring countries. Some $2.3 billion was raised at the January 2014 Kuwait Donor Conference.

“The international community needs to step up its support to the Jordanian and Lebanese hosting communities,” said Kim. “The people of these countries have demonstrated unprecedented generosity. They should not be left to shoulder this crisis alone.”