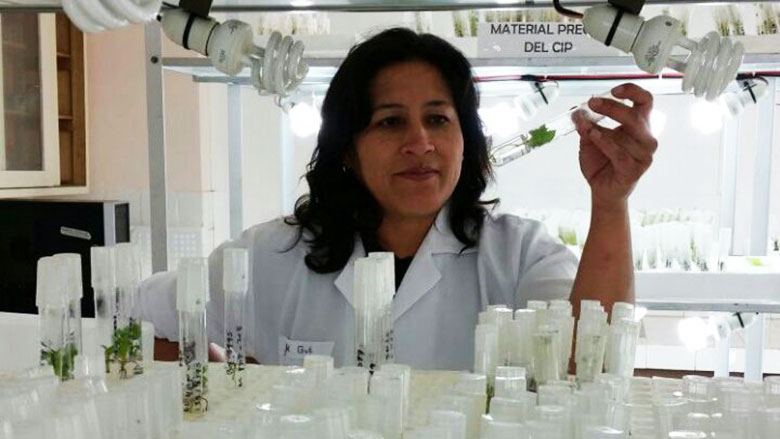 For about ten years Rozzana Medina has been managing the laboratory of in vitro culture. The Bank stores the entire collection of Bolivian Andean tubers, among other crops.

Bolivia has strengthened the capacity of its National Institute for Innovation in Agriculture and Forestry to conduct research, deliver advisory services, perform seed certification, and lead the pluralistic national agricultural innovation system. At least 20 innovations have been successfully adopted in the field, and more than 30,000 smallholder producers (including more than 11,000 women farmers) have benefited from these efforts.

Agriculture has been one of the most important sectors in Bolivia’s economy, contributing about 13 percent of GDP and accounting for just under 30 percent of total employment. Yet performance in the agricultural sector was disappointing; productivity in Bolivia was substantially lower than in neighboring countries due, among other factors, to the widespread use of antiquated technologies, limited uptake of modern inputs, and lack of knowledge and skills among farmers. With many in the population dependent on agriculture as their principal livelihood, increasing agricultural productivity was a national priority. Unlike many other countries in the region, which had mature public innovation institutes and systems to address technological challenges in the agriculture sector, Bolivia had only the National Institute of Agriculture and Forestry Innovation (Instituto Nacional de Innovación Agropecuaria y Forestal, INIAF), a recently formed national innovation institute, along with a dispersed, largely uncoordinated set of public and private research organizations.

The Agricultural Innovation and Services Project was undertaken to strengthen INIAF’s capacity to lead the national system for innovation in agriculture and forestry while at the same time supporting research, technical assistance, and seed certification activities. The primary emphasis during the project period was on pursuing shorter-term institutional objectives: specifically, strengthening INIAF and the national agricultural innovation system. Over the medium to long-term, it was believed that these activities would increase agricultural productivity, enhance food security, and improve the welfare of the rural population.

Bank financing responded to the shared vision of the Bolivian government and the Bank that the public sector would assume a leading role in mobilizing a diverse coalition of partners to generate the innovations needed to drive agricultural-sector development. Using a competitive grants mechanism, the project financed an extensive network of public-private collaboration that had previously been uncommon in Bolivia.

Between 2012 and 2017, INIAF’s capacity was strengthened, as reflected in the following key outcomes:

in the population dependent on agriculture as their principal livelihood, increasing agricultural productivity was a national priority.

The World Bank, through the International Development Association, provided a credit equivalent to US$ 39 million to finance the Agricultural Innovation and Services Project.

The project’s many beneficiaries included hundreds of small-scale commercial seed producers, who received technical assistance and financial support that allowed them to upgrade their seed production enterprises. The positive impacts were clear: “The income of seed producers is much higher than that of other farmers,” stated Nancy Rojas, who produces maize and peanut seed in the municipality of Vaca Guzmán in the Chaco region. “We are paid three to five times more when we sell seed compared to when we sell regular grain destined for consumption,” she added, noting the importance to the small-scale seed producer community of INIAF’s continued support.

Important legacies of the project include the strengthened capacity and skills of the organizations and individuals comprising the national agricultural innovation system and the strengthened capacity of INIAF to carry out research, provide advisory services, perform seed certification activities, and lead the national agricultural innovation system. The full impact of the institutional changes achieved under the project will take time to materialize. The project succeeded in substantively meeting its immediate objectives, but for the expected longer-term impacts to be realized, activities initiated under the project must continue in the years to come. 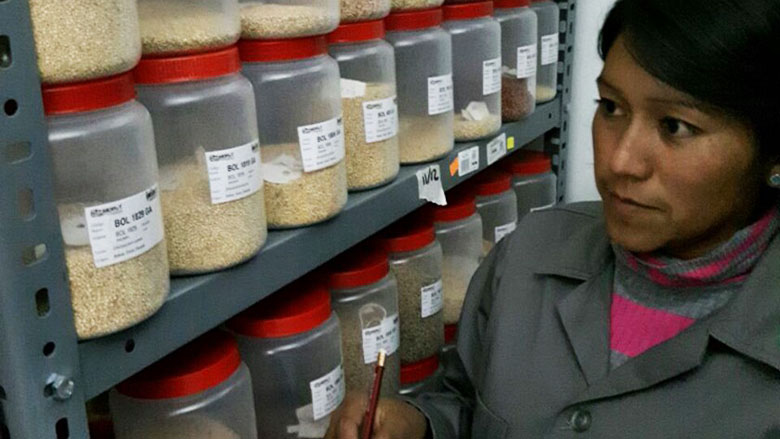 Nancy Huanca was engaged in the strategic research program for wheat and now, at the Genbank, is in charge of the largest collection of quinoa genotypes worldwide –more than 3,000 accessions for the superfood. © World Bank