Bumpy and slippery roads cannot stop young Dao minority group children in Lao Cai Province, Vietnam, from going to kindergarten. At school, they play with friends, learn new things, and get to know their surroundings, proving that early childhood education is one of the best investments a country can make.

World Bank Group
With World Bank funding and expertise, Vietnam has expanded access to full-day preschool to 84 percent of five-year-old children in just 4 years – up from 66 percent in 2011. The quality of preschool instruction improved through the provision of professional development for a large number of Early Childhood Education (ECE) teachers and managers. More than 2,000 core teachers were trained to provide professional development to about 250,000 ECE teachers in order for them to adopt a child-centered learning approach.

Early childhood education was once a neglected part of the Vietnamese education system and was often regarded as a child-minding service. Typically, young children were kept at home with untrained caregivers. Issues start when children go to preschool and there are not enough classrooms or teachers. And when they went to kindergarten, the schools did not provide appropriate educational settings for child cognitive and well-being development.

The results also showed that 45 percent of ethnic minority children were vulnerable to not being school-ready in contrast to 19 percent of non-ethnic minority children. ‘Vulnerable’ is defined as those children who are most at risk of facing increased negative outcomes (such as low school attendance)  compared to the "average" child in their society.  In this case, the share of vulnerable children was lower among those attending full-day preschool and who were provided lunch, as opposed to those attending only half-day without lunch.

Other factors that contributed to low levels of readiness was the absence of a preschool quality assurance system, preschool accreditation process, and poor teacher training, which often used out-of-date curricula. Ten percent of teachers received no training at all.

The School Readiness Promotion Project (SRPP) was designed to support the following elements of the government’s programs for Early Childhood Development:

The results-based approach adopted by SRPP enabled the government to increase its financial commitment to ECE. As such, the government was able to monitor the impact of its funding commitment and target resources towards disadvantaged areas to achieve its goals of universal enrolment and improved school readiness.

After four years, the program has achieved the following outcomes:

The program was funded through a $100 million IDA credit; $95 million was disbursed when predetermined results were achieved and $5 million went into financed technical assistance for capacity building, program development and policy development.

The government is coordinating overall financing for ECE in the country by different development partners such as UNICEF, Save the Children International, and Plan International.

The government monitors provincial performance through results indicators that are the same as the Disbursement Linked Indicators used by SRPP. However, further progress is needed in order to ensure that the most hard-to-reach groups of children have access to good quality preschool.

" The ECE programs have improved school facilities and the quality of teacher training. It created favorable conditions for attracting children, particularly those from highly disadvantaged ethnic minority groups, to go to school. This will help them become ready for primary education. As such, the demand for early childhood education from local people is growing. The increased quality of care and education has created a good reputation for the schools among the parents and local community. " 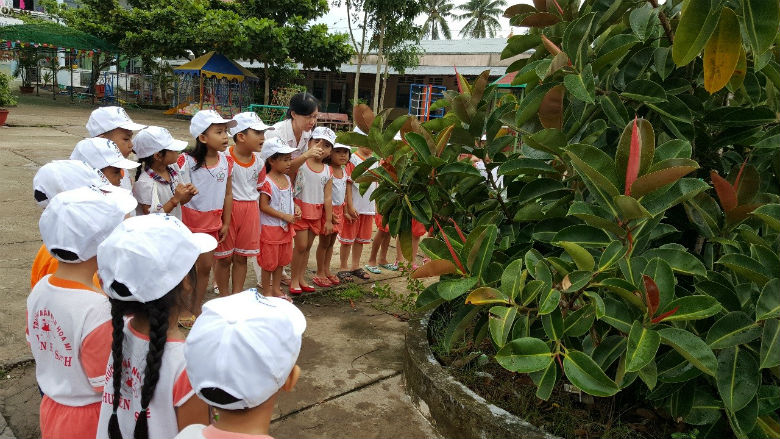