It is mid-June in Latvia, and the lilacs in the Gavares’ garden in Jurmala are still blooming. They put out blankets for visitors to sit under as they sip coffee outside and a steady wind blows off the Baltic Sea.

Despite the late spring, the Gavares are happy with themselves and their lives, partly, they say, because both of them are working and engaged in life outside of their house.

Valdis Gavare is 81 and a nuclear physicist. “My job has helped me to live. Without my job I wouldn’t have survived, mentally or physically,” he says. “In 1990, my life changed and I retired, but I never stopped working.”

Varda Gavare, age 72, teaches business English at a university in Riga. She speaks impeccable English. “We value hard work, when you don’t have anything to do, you get depressed. I really love what I am doing, even if I don’t feel all that well all the time anymore—I had a hip operation a couple of years ago.”

Healthy, hardworking older people like the Gavares might be the key to Latvia’s future economic growth. Latvia is aging, in part because of a drop in fertility rates and in part because young Latvians are moving to other parts of the EU for better work. It’s not that Latvians are living longer; it is simply that the old increasingly outnumber the young.

And, an aging society isn’t unique to Latvia. In 1950, the average age of a person living in Central and Eastern Europe was 30. Today it is 40, and if fertility remains at current levels, seven eastern European countries will see a population drop of 10 or more percent by 2030. 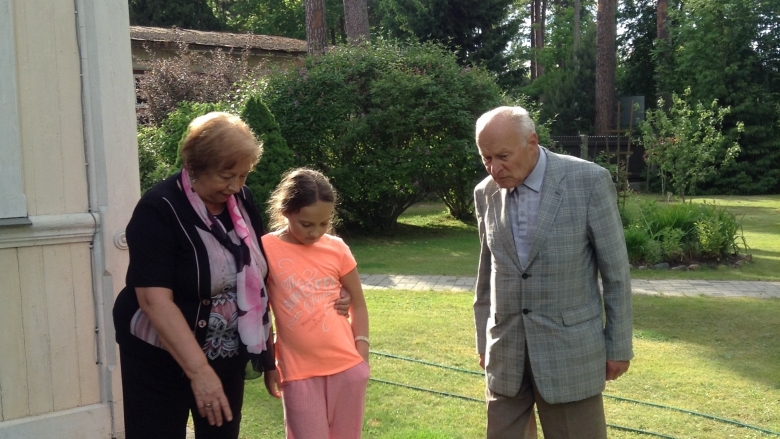 Valdis and Varda Gavare with their granddaughter enjoy walking around their home in Jurmala, Latvia. Focusing on areas such as cardiovascular health in Latvia would bring huge changes to healthcare, at a relatively low cost. People in Latvia, Lithuania and Bulgaria are not as aware of the benefits of cardiovascular health as people in Western Europe, who, as a result, tend to live longer.

One of the ways to replace those lost workers is with older workers, says Inese Kalvane, who is the director of Latvia’s State Employment Agency. “For those who are able to work, we tell them life-long learning is key. For those who have trouble finding work, we use our programs to help them, programs like vocational education, training programs, and subsidized work programs.”

Though unemployment remains a problem in Latvia, she says there are jobs for well-prepared senior citizens - but health, education and desire all play a role. Solveiga Isacenko, a career consultant, agrees. “What people need to get jobs, its willingness and education,” she says. “It’s easier for people with higher and better education. Setting realistic priorities in important, don’t limit yourself by being too restrictive by location near home.”

A new World Bank report encourages active aging and urges the Latvian government, and others, to create policies to support a healthy and vigorous old age. Studies show productivity peaks between the ages of 40 and 50, so a focus on life-long learning is important.

As is health. For Latvian men, especially, smoking, drinking, fatty food and lack of exercise means that, while Italy has increased longevity by 14 years, Latvians have only added four years to their life spans.

“I think people have to be active at older ages,” says Marta Kozireva, who works part-time doing accounting at a non-profit organization. She also does kidney dialysis three times a week, but says that doesn’t stop her from trying to be healthy. “Get out, do things. For example, I go to camp for people with kidney problems. We do yoga and we have to be active because life goes on, even if you’re disabled or sick.”

For the long-term, raising fertility rates is important. Countries with flexible labor markets and support for gender equality, like equal pay, education, and shared responsibility in raising children, have increased their fertility rates.

Migration to Latvia would also help. And aging societies do face concerns about savings, expanding healthcare costs for the elderly, increasing demand on pension systems, and declining productivity. Economists say that now is the time for governments to tackle these issues, and perhaps promote flexibility and a change in the retirement age.

All over the world, those with less education and less money die earliest, but that correlation is especially strong in Eastern Europe. With proper planning from governments and from people themselves, the idea is that - as they continue to live longer - they can look forward to a “golden age of aging.”