Can Skills Training Programs Increase Employment for Young Women? The Case of Liberia

April 14, 2014
The Economic Empowerment of Adolescent Girls and Young Women (EPAG) project in Liberia consists of six-months of classroom training followed by six-months of placement and support (including micro-enterprise advisory services and internship and job placement assistance). Participants are trained in business development skills, job skills and life skills. The aim is to increase young women’s wage or self-employment. According to mid-line results from 2012, the program led to a 47 percent increase in employment among trainees, increased average weekly income by 80 percent, and significantly increased savings among girls. An endline survey conducted more than a year after the completion of the program confirms that the impacts were sustained.

Youth unemployment is one of the main obstacles to development in Liberia. There are few opportunities to enter into wage employment; most of Liberia’s youth earn income on a day-to-day basis by trading on local markets or as day laborers in precarious conditions. The situation of young women is particularly challenging. Gender-based violence is pervasive in Liberia, nearly 40% of girls age 15 to 19 are not in school and cannot read or write, and many girls become mothers when they are still young themselves. Economically, young women are active, but they face many obstacles when it comes to finding and keeping jobs or starting businesses.

In response, the Economic Empowerment of Adolescent Girls and Young Women (EPAG) project—was launched in Liberia in March, 2010. The EPAG was the first pilot within the World Bank’s Adolescent Girls Initiative. The AGI initiative is being piloted in eight low-income countries—including some of the toughest environments for girls. Each intervention is tailored to the country context, and includes an impact evaluation to build the evidence base to help adolescent girls and young women succeed in the labor market.

This brief features results from the EPAG impact evaluation, showing that the project has been very successful in achieving its primary objectives—increasing employment and earnings among young women. The magnitude of the results is impressive when compared to findings from other youth training programs in developing countries. Furthermore, end-line analysis shows that EPAG’s effects are long-lasting.

The program consists of six-months of classroom training followed by six-months of placement and support (including micro-enterprise advisory services and internship and job placement assistance).  The aim of the project is to increase wage and self-employment for young women in Liberia. 70% of girls are trained in business development skills (BDS)[1] and 30% in job skills (JS)[2] targeted to sectors with high demand for workers.[3] The JS training, although primarily focused on wage employment, includes a short module on self-employment basics as a fallback because opportunities for wage employment are very limited in the Liberian labor market. All participants receive life skills training specifically designed for Liberian girls. In addition, trainees receive small stipends contingent upon classroom attendance and are assisted in opening savings accounts at local banks. Girls who complete the training are awarded a small bonus ($20 USD).

(i) EPAG is designed around girls' needs: service providers hold morning and afternoon sessions to accommodate participants' busy schedules; trainings are held in the communities where the girls reside; and every site offers free childcare.
(ii) Participation is incentivized creatively through attendance prizes, contests, business plan competitions, etc.
(iii) Girls receive support throughout the program from volunteer EPAG coaches who attend the classroom training and follow-up with girls in their communities during the placement phase. Girls are also organized into peer groups of EPAG girls for social and learning support.
(iv) The M&E framework includes frequent and unannounced visits to ensure that service providers maintain a high-quality learning environment.
(v) Performance bonuses are awarded to training providers that successfully place their graduates in jobs or micro-enterprises.

EPAG implementation is led by the Liberian Ministry of Gender and Development (MoGD) with a team of service providers. The EPAG project also includes a capacity-building component for the Ministry of Gender and Development that has resulted in a newly created Adolescent Girls Unit to help mainstream programming and policies sensitive to the needs of adolescent girls and young women in Liberia.

EPAG was originally targeted to young women who were i) between age 16 and 24; ii) possessed basic literacy and numeracy skills; iii) were not in school (although night school was okay); and iv) resided in one of nine target communities in and around Monrovia and Kakata City.

Community mobilization campaigns began in September 2009 and trainee recruitment took place from December 2009 through January 2010 in all nine target communities.  Recruitment—particularly for younger girls who were both not in school and literate—proved challenging and the age limit was raised to 27. EPAG originally recruited 2106 trainees.[4]

This brief summarizes rigorous evaluation results showing the impact of the project on the treatment group (round 1 trainees) as compared to a statistically similar control group (round 2 trainees). The EPAG impact evaluation employs a randomized pipeline research design in which trainees were randomly assigned to receive training in either the first round (March 2010 to February 2011) or second round (July 2011 to June 2012). 1273 trainees were randomly assigned to the treatment group and 769 to the control. Impacts are estimated using a difference-in-difference regression model. Outcomes are measured by a baseline survey completed in March, 2010 and a midline survey completed in May, 2011, six months after the treatment group (round 1 trainees) completed the classroom training. This paper also presents descriptive statistics of longer-term project impacts gathered in an endline survey that was completed in July, 2012. 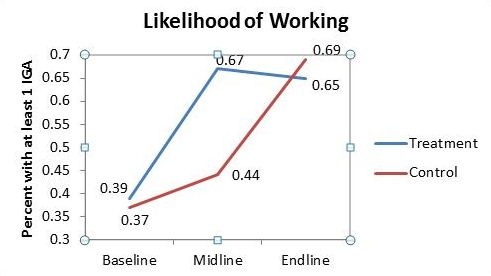 The positive employment outcome was much stronger among the business skills trainees. On average, the probability of finding employment increased roughly twice as much for BDS graduates as it did for those in the JS track. Furthermore, among the JS graduates who were working at midline, fully half were engaged in self-employment. At the end-line, just over 70 percent of BDS graduates were engaged in at least one income-generating activity (either wage or self-employment), compared to just under 60 percent of JS graduates.

The EPAG program increased average weekly income by 80 percent, relative to the control group.[6] Between baseline and mid-line, the treatment group's average weekly earnings increased by 565 LD (approximately $8 USD) more than the control group's earnings. Given that the commonly accepted minimum wage in Liberia is 25 cents per hour, an additional $8 USD per week is a large sum of money. EPAG improved earnings through two channels: primarily, by bringing more people into employment, and secondly, by increasing the productivity of those who were already engaged in income-generating activities.

EPAG significantly increased girls’ savings. At mid-line, the treatment group had, on average, a total of 2,500 LD (nearly $35 USD) more in savings than the control group. In addition to saving in banks, the treatment group also reported having increased savings in informal savings clubs. The increase in savings amounted to more than the trainees earned through the project’s the completion bonus of $20 USD.

EPAG graduates were more confident than the young women who had not participated in the program. EPAG graduates reported a more positive attitude: they felt more in control and more comfortable, and they had greater confidence in their own business abilities as well as in their personal and social lives. They were also more confident than the control group in their personal relationships with spouses and partners.

The EPAG project is financed by contributions from the Nike Foundation and the Adolescent Girls Initiative Multi-Donor Trust Fund. It is implemented by the Ministry of Gender and Development of the Government of Liberia, and is technically supervised and administered by the World Bank.

The project is implemented by the Project Implementation and Coordination Team in the Liberian Ministry of Gender and Development. The Project has an inter-Ministerial committee that includes the Ministry of Youth and Sports, Ministry of Education and Ministry of Labor.

The EPAG evaluation provides strong evidence that skills training can be an effective policy option for increasing employment and promoting empowerment among young women in Liberia. The EPAG program increased employment by 47 percent—a greater increase than has typically been found for similar programs.

These impressive results were achieved at a relatively high per-participant cost that reflects the holistic approach of the EPAG program and the high cost of program implementation in Liberia. Program costs are approximately $1200 USD per girl for BDS training and $1650 USD per girl for JS training. Despite the high initial investment, the expected returns of the business skills training are compelling. Under realistic assumptions, it will take 2-3 years for BDS participants to increase their earnings in an amount equal to the original investment. The lower return on investment for the JS training is not surprising given the limited opportunities for wage employment in Liberia. Given these challenges, EPAG is making design changes to maximize employment outcomes for future JS trainees.

EPAG is currently targeting 1,000 adolescent girls and young women in its third round of implementation, supported by the Umbrella Facility for Gender Equality. EPAG Round 3 is implementing several design changes based on lessons learned from the pilot phase including a condensed training period (4 months of training and 5 months placement), training fewer participants (18%) in JS, increased effort to reach younger and less literate girls, a savings matching scheme to assist with business start-up capital, and formalized agreements with the private sector for job skills training and placement. In addition, EPAG has expanded geographically to reach young women outside greater Monrovia.

"[My favorite part of the training] is painting, because it is strange to see young women painting in Liberia."
— EPAG Graduate

"With the skills I got I am sure that if I apply for work in my area of training I will get the job, but if I do not find a job I can try to start my own business with the business training I got."
— EPAG Graduate

"I used to braid hair and just eat the money without thinking about the future, but now I consider saving as being important for the fact that saving helps me to have some money when things become tough."
— EPAG Graduate

"I am satisfied with the training because the training provided me with new skills and knowledge which will be with me until I die. ... I am now somebody with knowledge, value and skills."
— EPAG Graduate

[2] When possible, the participant's track preference was honored; however, there was excess demand for the JS track so many participants were placed into BDS.

[4] Additional recruitment was carried out in 2011 because the project was designed to train 2500 girls. Participants recruited in the second batch, some of whom also received additional literacy training, are not included in the impact evaluation.

[5] An income-generating activity encompasses the full range of activities through which people earn money, e.g. wage employment (jobs), self-employment (either in a small business or through petty trade) or some combination of these.

[6] Respondents reported their cumulative earnings across all income-generating activities over the past week, in addition to the value of an in-kind compensation.

[7] “Formal” loans are those from banks, credit groups, susu, or money lenders; “informal loans” are those from parents, friends, relatives, or business partners.