The national statistical system of Ukraine is centralized in the State Statistics Service of Ukraine (SSSU). With a World Bank loan, the SSSU has rolled out a new nation-wide Integrated Statistical Data Processing System based on modern information technologies. More photos...

With the World Bank's assistance, the State Statistics Service of Ukraine is making gains in capturing and calculating economic and social statistics, based on modern information technologies.

Fifteen acres of black soil is the main source of income for Galyna Movchan, who lives about 170 kilometers from Kiev, Ukraine's capital. Galyna's vegetable garden gives her enough harvest to have food at home. She sells the rest of her yield on the market. Once a week, Galyna travels to Kiev, where food prices are much higher than in the countryside.

"It is a very hard work. We wake up at 4:30 in the morning and go to bed near midnight," Movhan says, sitting amid her cabbages, red beets and potatoes at market. "We have to work, because my monthly pension is just 1000 hryvnias which is equivalent to 120 US dollars. Most of my earnings will be spent on house utilities and on helping my grandson to pay for his university education."

" Most of my earnings will be spent on house utilities and on helping my grandson to pay for his university education. "

Grains of Sand Add Up

As important as it is to her, Galyna Movhan's money is only a grain of sand in the Ukrainian economy. For the government, it is part of the country's statistical record, which is the domain of the State Statistics Service of Ukraine (SSSU). With help from the World Bank, the SSSU is making gains in capturing and calculating economic and social statistics.

Using a World Bank loan, the SSSU has rolled out a new nation-wide Integrated Statistical Data Processing System based on modern information technologies. "In 2011, Eurostat, the statistical office of the European Union, recognized that our policy and methodology were generally in line with European standards. However, there was a suggestion that we should conduct structural surveys more often, for example a census of Ukraine's agricultural sector," explains Oleh Prokopenko, who is the head of the Department of Agricultural and Environmental Statistics at the SSSU. In 2014, the State Statistics Service will launch an agricultural census in all regions to receive detailed information about crops, farming technics and land ownership.

In 2014, for the first time ever, the State Statistics Service will conduct a nation-wide agricultural census.  More photos...

But the biggest challenge for the SSSU is the all-Ukrainian population census in 2013. The census will map recent demographic trends in the country, charting, for example, a decline in population, which has shrunk by more than 6 million people since 1990.

All of the SSSU's data is available to anyone on the agency's web site. The web site also provides information for political and social analysis. Liudmyla Cherenko researches poverty and its trends, and her work is utterly dependent on accurate statistics. "The main source for researching the problem of poverty and living standards is the data on living standards of Ukrainian households produced by the Statistics Service," she says. "It is worth improving a methodology of collecting the data, but the survey of Ukrainian households is the basis for writing reports to the local policymakers and to the scientific community." Cherenko heads the Department of Living Standards Research at the Institute for Demography and Social Studies, National Academy of Sciences of Ukraine.

To improve its capacities, the State Statistics Service has invested in training its staff and in strengthening its computer network. "We have significantly modernized our corporate network. Thanks to that we have sped up data transmission. We have also connected all our regional offices with an optic fiber," says Olena Puzanova, the head of the Department of Informational Technologies at the State Statistics Service, while showing off the newly built server room. And, with further support from the World Bank, the SSSU plans to enlarge and better equip its server room and its capabilities.

"The collection of information is an important stage in statistics and the main part of it we do on the local level. Information is gathered by rayon (district) offices and oblast (regional) offices," explains Raisa Vilenchuk, who runs the Kiev Local Statistics Office. She leads the largest local statistics office in Ukraine, which collects the largest bulk of numbers, including financial data about economic activities of local enterprises.

" The collection of information is an important stage in statistics and the main part of it we do on the local level.  "

Statistics are key to government operations. Governments rely on statistics to monitor and improve social spending on issues ranging from poverty prevention to education.  More photos...

Knowing How People Earn and Spend

Raisa Vilenchuk's Statistics Office pioneered in the development of electronic templates and One Stop Shop facilities. These innovations eliminated long lines where accountants once waited for hours to handle paper reports from businesses to the state bureaucracy. "In Soviet times," Vilenchuk explains, "all stats were reported to the State Statistics within the terms convenient for the state apparatus. We changed this. Now we demand quarterly and annual data when companies are sending their quarterly and annual accounts."

Governments rely on statistics to monitor and improve social spending on poverty prevention and education. They use statistics to map transportation trends and health care. Without accurate statistics, there is no modern and efficient government, nor can Ukraine put in place the economic reforms the country badly needs. 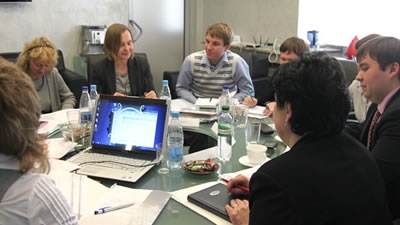