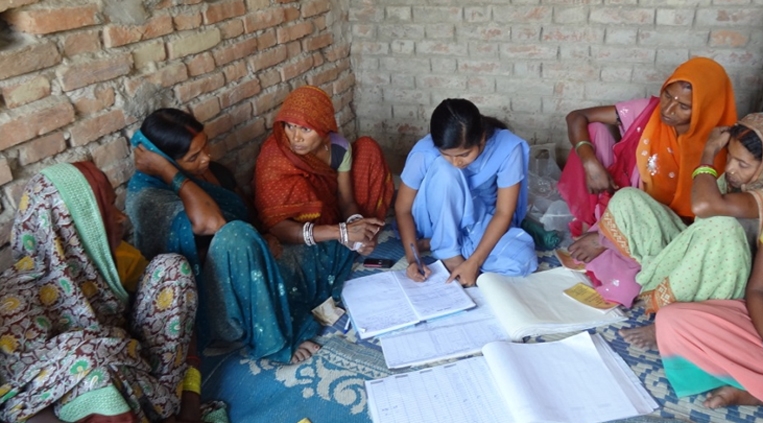 The project is promoting social and economic mobilization of poor households, especially women, liberating them from the debt trap, and enabling them to save and access bank credit to develop new livelihoods. Food security has increased with improved methods of planting wheat and greater ownership of cows and bullocks. Access to social security pensions and government employment programs has risen. Since 2007, the project has mobilized 850,000 poor women into 67,000 self-help groups and 4,500 village organizations.

In Bihar, India’s second poorest state, per capita income was just a quarter of the national average in 2004. Almost 90 percent of the population lives in rural areas, with limited opportunities for self-employment and little access to basic services. Although agriculture is the mainstay of the economy and employs over 80 percent of the population, the vast majority of farmers survive at subsistence and near subsistence levels. Without an adequate banking network, most poor people have to borrow from extortionist moneylenders or relatives and friends to meet family expenses, often pawning tiny plots of land to repay old debts. Growing landlessness and the lack of livelihood opportunities was also contributing to large out-migration from the state. Earlier efforts by the Bihar Government to promote the social and economic mobilization of the poor had been thwarted by entrenched caste identities and the absence of sensitive support and facilitation.

The project—the first World Bank-supported project in Bihar after nearly two decades—promoted social, financial and economic inclusion by effectively targeting poor households, especially women, and supporting the formation of self-help groups (SHGs). The SHGs helped women to save and access bank credit and enabled them to retrieve their assets, such as pawned lands, and develop new livelihoods.

By banding together into SHGs, the poor women also gained a collective voice as they were able to lobby for benefits and services to which they were entitled. These services included access to electricity and roads, as well as to government food and employment programs.

The project has facilitated social mobilization of poor households into community-managed institutions, encouraged thrift and savings, and provided financial literacy and counseling services. Eventually, the commercial banks perceived the poor as reliable clients and 14 commercial banks have partnered with the project.

Social mobilization has been accompanied with focused efforts to improve both the demand and supply side of credit. The capacity of community institutions was built by helping them manage their own finances, and by providing financial literacy services and education. As these institutions reach a certain level of maturity, a one-time revolving fund—Community Investment Fund (CIF)—is disbursed and a microcredit and livelihood plan is prepared for each community. The micro-plan consists of aggregation of various livelihood and income generating activities proposed to be undertaken by the households and the investments required to execute these activities. These microcredit plans go through a three-step appraisal process and are vetted by higher-level community organizations, project staff and the commercial banks.

Farm productivity was also improved by piloting the System of Wheat Intensification in drought-prone areas. While the new system is more labor-intensive, it increases yields dramatically and requires less seeds, water, pesticide and fertilizer, amounting to considerable savings for the farmer.

As of March 2013, the project had mobilized 850,000 poor women into 67,000 self-help groups (SHGs) and 4,500 village organizations. Of these, more than 90 percent belong to vulnerable groups such as scheduled castes, scheduled tribes and backward castes.

Since 2007, the self-help groups of the poor have so far cumulatively saved over $8.2 million, and accessed $31.8 million in credit from commercial banks. A strong partnership has been built with four commercial banks and three regional rural banks.

Since 2007, these community organizations are managed by nearly 30,000 trained grassroots women leaders and 8,000 para-professionals, resource persons and functionaries trained in the areas of institutional capacity building, bookkeeping, providing linkage with commercial banks and livelihood support services.

A survey of 4,000 randomly selected households showed that there was a 58 percent increase in the number of households that had started regular savings. Food security had increased with greater ownership of cows (by 59 percent) and bullocks (by 177 percent).

The project began in June 2007, with International Development Association (IDA) financing of $63 million out of the total estimated project cost of $73 million. The Government of Bihar is contributing $7 million and the community is expected to contribute $3 million. Additional financing of $100 million provided by IDA was approved in March 2012.

The project has various partners from the Bihar government, private sector and non-profits. Professional Assistance for Development Action (PRADAN) and Advance for Social Advancement (ASA) are the national resource organizations that provided technical assistance for implementing agriculture interventions. The project has also introduced several innovative information and communication technologies in collaboration with Digital Greens, which are improving the efficiency of extension delivery systems and information flow amongst communities.

Additional financing of $100 million is helping expand the social mobilization process to include 160,000 households in three new districts affected by the 2010 floods of the Kosi River. The project will also deepen the social inclusion impact in existing blocks (sub-districts) that the project supported. The additional financing is also helping develop scalable models in key livelihood sectors such as agriculture, dairy, job creation for migrant youth and increased access to safety nets through convergence with other government programs.

" Thanks to better farming methods introduced under the project, the productivity from my land has gone up four times. My income has increased and I am able to send my son to college. "

A mother of four children, lives in Shekhwara village in Gaya district

Kunti Devi, mother of four in Shekhwara village in Gaya district, barely had an acre of farmland. Faced with frequent droughts, she had to mortgage her land to the local moneylender, forcing the family to work as laborers on others’ lands. The project helped free her from the vicious cycle of debt. “I took a loan of Rs 10,000 from the self-help group to free my land. Today I’m able to repay it at a very low rate of interest compared to what I was forced to pay to the moneylender. Thanks to better farming methods introduced under the project, the productivity from my land has gone up four times. My income has increased and I am able to send my son to college,” said a beaming Kunti Devi.

Manna Devi, mother of three, used to find it difficult to feed her family. “We were living a hand-to-mouth existence before and we just couldn’t manage to eat, let alone put our children through school. We were only producing about 30 kg of wheat which lasted us four months and we had to take loans. My husband had also taken a second job as a rickshaw puller to make ends meet.” Now, Devi says she produces about 80 kg of wheat—enough to feed her family for a year—and soon hopes to start selling her extra crop.

In Bhusia village, Baijanti Devi, a Class VIII drop-out, mobilized the villagers to get a road constructed. Although the plans for the road had been sanctioned, the road continued to elude the people. “We tracked down the contractor and forced him to begin construction. Later, we realized that he was not providing the mandatory drainage system, so we talked to the laborers and sought their help. They suspended work and forced the contractor to do the job properly,” said Baijanti.