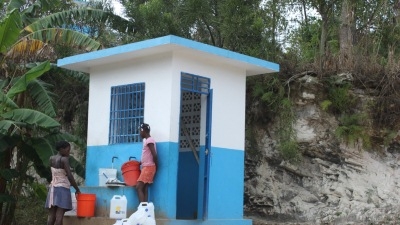 Jean-Martin Brault/World Bank
Drawing upon expertise and funding from the Bank and the State and Peace Building Fund (SPF), Haiti has delivered access to clean water to more than 33,000 Haitians in rural areas, and improved sanitation conditions with the construction of school latrines for 3,700 students and teachers in six communities.

At the time the project was designed in 2006, limited resources (outside of the metropolitan area) for water supply in Haiti were mostly used for urban water supply in secondary towns. Due to lack of funds, the Ministry of Health’s rural water units were small and inactive. There was also no institutional home for sanitation. Without an institutional presence in rural areas and with little knowledge about levels of coverage and needs, it was thus difficult to prioritize investments, which were carried out in a piecemeal manner and did not necessarily reach the neediest citizens.

Local communities did not maintain infrastructure well and many rural water systems were managed by water committees often consisting of unpaid volunteers elected by the community. The performance of water committees varied widely, but most water committees seemed to not perform their functions adequately and collected insufficient funds for operation and routine maintenance.

The trust fund and the associated Bank grant were designed to address the challenges of bringing water supply to rural areas in a sustainable way and increase access to and use of water supply and sanitation services in participating rural communities. Communities were identified by evaluating their willingness to pay for water services (by the volume) and by using a participatory approach providing communities with a series of choices, including choice between different water service levels (house connection or water kiosk) and choice in the tariff structure and level (covering only operating costs and basic maintenance, or including a reserve for major maintenance). Project-financed activities targeted approximately 50,000 people, which represent 20 percent of the population of the participating communes.

This project’s key innovation is the introduction of a professional management model involving local water operators selected by the community to operate, maintain and manage the water supply systems based on a contract signed with the communities. Furthermore, the project promoted cost recovery, metering, and the use of water kiosks instead of standpipes, as well as gravity-fed piped systems to minimize potential technical issues. Where pumping was necessary and cost-effective, the project gave a strong preference to renewable energy, such as solar.

The project focused on (i) increasing the sustained and effective use of safe drinking water in participating communities, (ii) improving use of sanitary and hygienic practices in participating communities, and, (iii) strengthening the capacity of the implementing agency, local water committees, and professional operators in cooperation with local Government. The program helped support improvements in several key outcomes:

The US$5 million SPF Grant was awarded in November 2008 to complement the US$5 million Bank Grant signed on February 15, 2007 and closed on December 31, 2011. Both grants financed project activities through the National Directorate for Drinking Water Supply and Sanitation (DINEPA).

There is a strong partnership among key development partners in Haiti’s water sector. The Rural Water Supply and Sanitation program’s philosophy (professional operator management model) is shared by the Inter-American Development Bank (IDB) with whom periodic meetings are held to coordinate investments, analytical work and lessons learned.

As a result of the successful implementation of the professional operator management model for rural water supply piped systems and its implementation, DINEPA is exploring the feasibility of scaling up this approach at the national level. A national workshop is being organized to draw lessons learned from the program and identify the path forward. The project is exploring the idea of facilitating professional operator exchanges with countries in Africa where a similar management model has been successfully put in place. The project team has been collaborating with the Water and Sanitation Program in this regard.

At project closure in November 2013, it is estimated that 50,000 people will have received improved water supply services as a result of the project. The project also financed the construction of school latrines for 3,700 students and teachers. The project team is currently designing beneficiary surveys with DINEPA in order to evaluate further the impacts of the water supply and sanitation interventions. Beneficiary communes included Arniquet, Cavaillon, Chantal, Coteaux, Chardonnières, Fond des Nègres, Fond Tortue, Ile à Vache, Maniche, Simon, all in Sud Department, and St-Michel des Nippes, Nippes Department.

8
rural water supply piped systems in the Sud Department provided potable water to 33,700 people between 2009 and 2011.