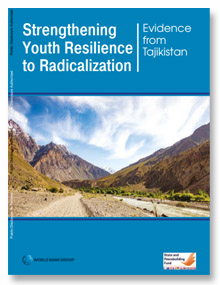 Globally, fragility, conflict, and violence (FCV) are among the most pressing challenges to reducing poverty and achieving the Sustainable Development Goals (SDGs). There is an increased urgency to tackle these issues, given the rise in violent conflicts, record numbers of forcibly displaced people, and a growing share of the poor living in FCV-impacted countries. By 2030, it is estimated that up to two-thirds of the world’s extreme poor will live in fragile and conflict-affected settings.

The World Bank Group recently released its first Strategy for Fragility, Conflict and Violence 2020-2025, and has mobilized unprecedented financing for addressing FCV, particularly to strengthen the International Development Association’s (IDA) role in preventing the onset, escalation, and recurrence of violent conflict, and in mobilizing support for refugees.

One of the financing tools is the Risk Mitigation Regime (RMR), which is a pilot instrument under IDA-18. Along with Guinea, Nepal, and Niger, Tajikistan is among four countries globally, having received funding of almost US$100 million from RMR to address the risks of FCV, in addition to its regular allocation from IDA.

The above-mentioned FCV Strategy underlines the importance of preventing violent extremism, as it displaces people from their homes and livelihoods, destroys infrastructure, exacerbates tensions in society, weakens government structures and governance, and diverts resources from service delivery as governments are forced to invest more in security.

Strengthening Youth Resilience to Radicalization: Evidence from Tajikistan is the first in a series of multi-country studies called Central Asia: Development Approaches for Preventing Violent Extremism, that analyze the youth, gender, and local dimensions of radicalization and recruitment by violent extremist groups in the region of Central Asia and present policy recommendations to address them.

This study is based on qualitative research conducted across the country in 2018 and builds on the government of Tajikistan’s official statistics, as well as existing literature on socio-economic conditions and violent extremism in the country.

The study identifies which groups of Tajikistan citizens are vulnerable to radicalization and examines how they become radicalized and recruited. It also looks at underlying factors that can contribute to radicalization, such as grievances related to governance and socio-economic conditions.

The study contributed to the design of three projects funded under the RMR instrument in Tajikistan that focus on vulnerable communities and youth groups along border areas with Afghanistan.

Youth were the group most commonly identified as being vulnerable to radicalization and recruitment. Many survey respondents believe the recruitment of young people has increased over the last four or five years. Migrants working abroad and returning migrants were the second group, and women were the third most commonly cited vulnerable group.

While grievances and perceptions of socio-economic exclusion may in some cases facilitate the process of radicalization and recruitment into extremist groups, they do not necessarily lead to it. Such grievances may—in combination with primary drivers such as the presence of recruiters in communities—contribute to radicalization, however, most young individuals in Tajikistan do not become radicalized despite facing similar disadvantages and challenges.

Many respondents raised concerns about the areas bordering Afghanistan. Both community leaders and focus group participants reported that recruiters from Afghanistan, where they said, “life is harder,” easily cross the border.

The study recommends a comprehensive set of primary, secondary and tertiary prevention measures to build resilience among vulnerable population and communities. Primary prevention refers to inclusive policies and programs that address vulnerable individuals who are not yet radicalized but who are exposed to radical influences.

Secondary prevention refers to measures targeted at individuals who are at high risk of cognitive radicalization or violent extremism due to proximity to radical and recruiting networks. Tertiary prevention refers to measures directed at radicalized individuals who have adopted extremist ideas, although they may not have committed any violent attacks.

In order to build youth resilience on the community level, respondents suggested such measures as ensuring better access to jobs, education, and skills, engaging in dialogue with community members and youth on how to best mitigate the risks of violent extremism, involvement of parents in this dialogue, building the capacity of teachers and principals to positively influence parents and students and offer programs and extracurricular activities focused on violence prevention and development of critical thinking skills.

The study also proposes that policy-makers and development partners should consider a wider range of development policies and programs for young people who have not yet been radicalized. Such an approach would also require addressing the grievances and perceptions of exclusion related to poor local governance by district and sub-district administrations, and lack of affordable access to services and economic opportunities.