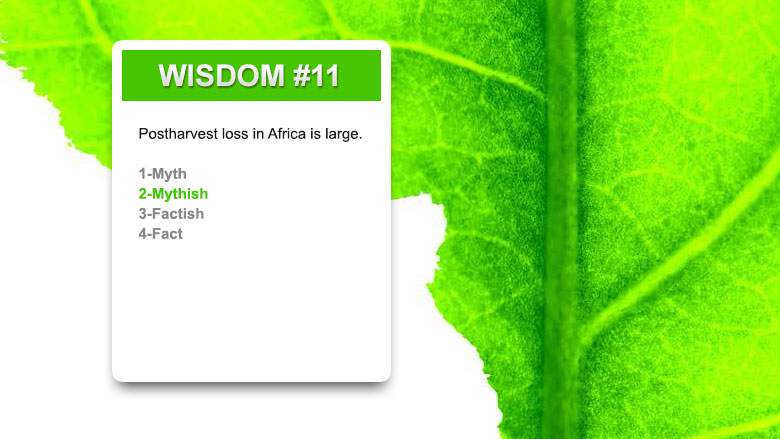 Farmers estimate PHL losses to be substantially less than those of the FAO. Self-reported estimates are arguably the relevant metric when assessing likely adoption of better PHL handling techniques.

FAO estimates from 2011 suggest that as much as 37 percent of food produced in Sub-Saharan Africa is lost between production and consumption. Estimates for cereals are 20.5 percent. For post-harvest handling and storage loss only, the FAO estimate is 8 percent, and the African Post-harvest Losses Information System (APHLIS) estimate is 10-12 percent.

These high estimates have motivated international attention to PHL. Yet interventions typically focus on improving on-farm grain storage techniques for small-scale farmers. The estimates use extrapolation from purposively sampled (and often older) case studies that may focus on areas where PHL is largest. More and better quantification of (on-farm) grain loss is needed (which can then be compared with the costs of improved postharvest practices). Also needed is a better understanding of farmers’ behavior in adopting improved postharvest technologies.

The Living Standards Measurement Study–Integrated Surveys on Agriculture includes nationally representative household surveys from six countries in Sub-Saharan Africa. Farmers provided socioeconomic information about their households, agricultural production systems, and share of PHL for their crops. This paper uses these self-reported estimates to gauge the extent of PHL among maize producers and its agroecological and socioeconomic drivers in Malawi, Tanzania (two surveys), and Uganda. Although prone to measurement error, farmers’ self-reported estimates are drawn from nationally representative samples, thereby avoiding overestimation from sample selection bias. Harmonization across surveys facilitates cross-country comparison. And estimates likely reveal the losses that farmers deem important, which is critical when assessing likely adoption of improved postharvest storage techniques.

The following are important when planning, designing, and targeting PHL interventions: