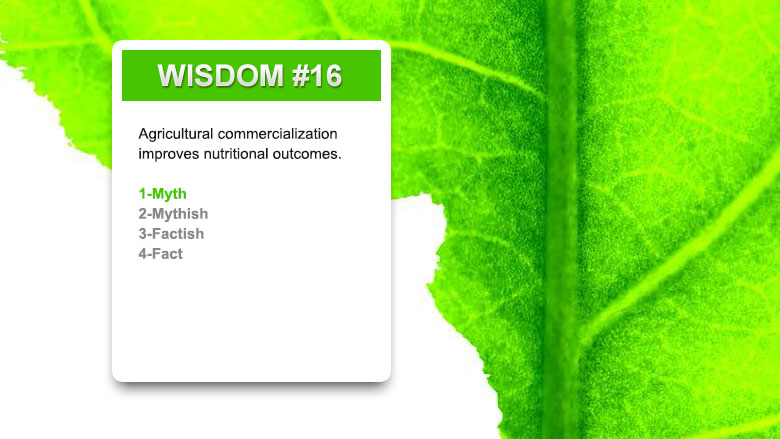 While agricultural commercialization may not pose a threat to nutrition, it is, on average, also unlikely to suffice on its own to improve nutritional outcomes. Complementary measures will be needed.

The progressive move toward a market-oriented system of production in agriculture is also expected to initiate a virtuous cycle that, by raising income levels, improves consumption, food security, and nutritional outcomes in rural households. Nonetheless, this process requires that households choose to commercialize their production and use the returns from crop sales in ways that foster improved nutrition. Thus, although the commercialization of crops may potentially increase incomes, and thereby improve nutrition, farming households often avoid commercializing their crops. This finding is often attributed to the fact that households are not indifferent between production for the market and production for the homestead

This study covers two survey panel waves in three countries included in the Living Standards Measurement Study–Integrated Surveys on Agriculture (LSMS–ISA) program, namely Malawi, Tanzania, and Uganda. The surveys were fielded throughout the year. Given the focus, the study sample only includes agricultural households, defined as households that reported involvement in agricultural activities through ownership and/or cultivation of land in the most recently completed agricultural season.  After excluding nonfarming households and households that were only observed once, the final sample that was used for the panel analysis consisted of 2,222 households in Malawi, 1,744 in Tanzania, and 1,587 in Uganda. The degree of commercialization was proxied by the share of total crop production value marketed, the Household Crop Commercialization Index (CCI). To proxy nutritional outcomes, three measures were used: a) child anthropometric measures; b) food expenditure per capita; c) total expenditure per capita.

While agricultural commercialization may not pose a threat to nutrition, it is, on average, also unlikely to suffice on its own to improve nutritional outcomes.