Lao PDR: Poverty Continues to Decline but Progress under Threat 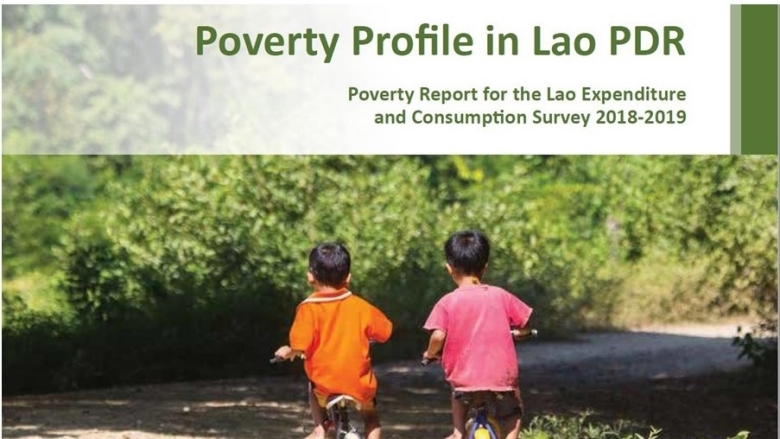 VIENTIANE, October 20, 2020 –Lao PDR has made remarkable progress in reducing poverty over the past 25 years, with the proportion of the population living in poverty falling by more than half, from 46 percent in 1993 to 18 percent in 2019. The finding comes from two reports just released by the Lao Statistics Bureau and the World Bank. But the good news comes with a caveat: some of the gains made against poverty could be erased by the impact of the COVID-19 pandemic on the Lao economy.

The Poverty Profile in Lao PDR is based on the latest Lao Expenditure and Consumption Survey (LECS), carried out nationwide in 2018-19. The report was launched along with the Poverty Assessment 2020: Catching Up and Falling Behind, which analyses the survey data in more depth and explores the factors behind emerging trends. Data from the LECS shows that the national poverty headcount rate declined by 6.3 percent over six years, from 24.6 percent in 2013 to 18.3 percent in 2019. This means, however, that almost a fifth of Lao people are still living on incomes below the 2019 national poverty rate of 9,364 kip (US$1) per day.

“Rising farm incomes and remittances have helped people in different parts of the country escape poverty”, says Mme Phonesaly Souksavath, Head of the Lao Statistics Bureau. “Rural areas have narrowed the poverty gap with urban areas, where poverty has fallen less quickly. Poverty declined notably in the south, thanks to cash crop production, and in the north, where employment opportunities have become more common”.

At the same time, several factors have slowed down poverty reduction in different regions, with a scarcity of jobs outside the agricultural sector leading to an overall increase in inequality. Wages have increased by almost 60 percent for those with jobs, but many people have not been able to access the opportunities provided by employment. This is especially true in the central provinces, where poverty reduction has stalled.

“The data shows that most of the families under the poverty line share one or more characteristics: their head of household is from an ethnic minority group, has a low level of education, or has no access to employment,” says Nicola Pontara, World Bank Country Manager for Lao PDR. “Government policies have helped narrow geographical income gaps. However, not enough jobs are being created to distribute the benefits of economic growth equitably”.

According to both the Statistics Bureau and the World Bank, the economic effects of COVID-19 pose a severe challenge to efforts to end poverty in Laos. The pandemic has brought an unprecedented employment shock, putting pressure on an already-weak job market. At the same time the return of migrant workers, particularly from Thailand, has led to a substantial fall in remittances. The Poverty Assessment report estimates that poverty will increase by 1.4 to 3.1 percent in 2020, compared to the 0.6 percent decline that would have been expected with no COVID-19. Given these challenges, a broad set of interventions, targeting different groups of the poor, will be required to restore poverty reduction momentum in Lao PDR.