401 km Ludhiana-Khurja section of the 1,840 km long Corridor will be built in this phase

NEW DELHI, October 21, 2016 - The Government of India and the World Bank today signed a $650 million agreement towards the third loan for the Eastern Dedicated Freight Corridor (a freight-only rail line) that will help faster and more efficient movement of raw materials and finished goods between the north and eastern parts of India. The project was approved by the World Bank Board on June 30, 2015. 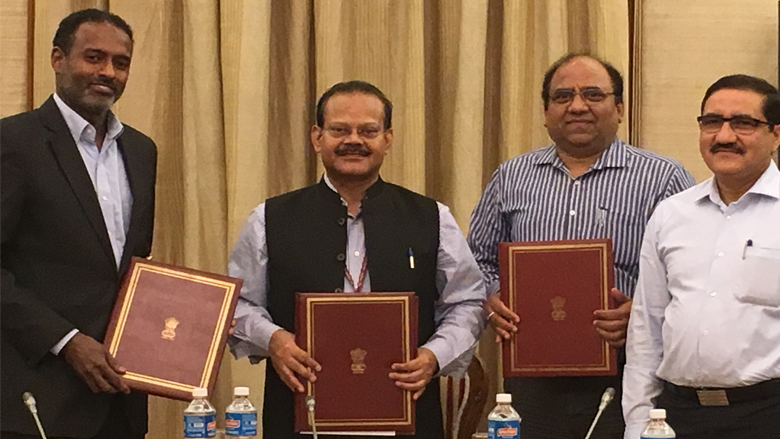 The Eastern Corridor is 1,840 km long and extends from Ludhiana to Kolkata. The World Bank is supporting the Eastern Dedicated Freight Corridor (EDFC) as a series of projects in which the three sections with a total route length of 1,193 km will be delivered sequentially, but with considerable overlap in their construction schedules. EDFC 3, approved by the Board on June 30, 2016, will build the 401 km Ludhiana–Khurja section which goes through Punjab, Haryana and Uttar Pradesh. The project will help increase the capacity of these freight-only lines by raising the axle-load limit from 22.9 to 25 ton axle-load (upgradable to 32.5 ton axle loads) and enable speeds of up to 100 km/hr. The DFC lines are being built to carry bulk freight trains of 6,000 to 12,000 gross tons. The project is also developing the institutional capacity of the DFCCIL to build and maintain the DFC infrastructure network.

“The objective of the EDFC project is to augment railway freight carrying capacity along the Railway Corridor between Ludhiana and Kolkata.  The project will benefit industries of Northern and Eastern India, which rely on railway network for transportation of material inputs and exports that would accelerate creation of jobs in the northern and eastern regions of the country,” said Raj Kumar, Joint Secretary, Department of Economic Affairs, Ministry of Finance.

“Implementing the Dedicated Freight Corridor program will provide India the opportunity to create one of the world’s largest freight operations. The corridor, which will pass through states like Uttar Pradesh, will benefit from the new rail infrastructure, bringing jobs and much-needed development to some of India’s poorest regions,” said Hisham Abdo, Operations Manager and Acting Country Director, World Bank India. “Moving freight from road to rail will reduce the carbon footprint of freight,” he added.

The EDFC is part of India’s first Dedicated Freight Corridor (DFC) initiative – being built on two main routes – the Western and the Eastern Corridors. These corridors will help India make a quantum leap in increasing the railways’ transportation capacity by building high-capacity, higher-speed dedicated freight corridors along the Golden Quadrilateral. Currently, the rail routes that form a Golden Quadrilateral connecting Delhi, Mumbai, Chennai and Kolkata, account for 16 percent of the railway network’s route length, but carry more than 60 percent of India’s total rail freight.

Augmenting its transport systems is a crucial element of India’s trillion-dollar infrastructure agenda. Since the 1990s, road transport has advanced more rapidly than the railways, and now accounts for about 65 percent of the freight market and 90 percent of the passenger market in India, and those shares are growing.

“The Indian Railways urgently needs to add freight routes to meet the growing freight traffic in India, which is projected to increase more than 7 percent annually. These freight lines will wholly transform the capacity, productivity, and service performance of India’s busiest rail freight corridors. At completion, it will be able to more than double its capacity to carry freight, with faster transit times, being more reliable and at lower cost,” said Ben L. J. Eijbergen, Program Leader, Economic Integration and the Task Team Leader for the Project.

Significant Green Impact: In addition to the efficiency improvement and other operational benefits, the project is expected to bring in significant reductions in Green House Gas (GHG) emissions.

A Green House Gas Emission Analysis was conducted by DFCCIL for the Eastern DFC Project. The analysis shows that the Eastern corridor is expected to generate about 10.48 million tons of GHG emissions up to 2041-42, as against 23.29 million of GHG emissions in the absence of EDFC – a 55 percent reduction in GHG emissions.

Economic opportunities are also being explored along the freight corridor. The government is planning to set up integrated manufacturing clusters using EDFC as the backbone. These clusters will be set up with an investment of about $1 billion on either side of EDFC.

The loan, from the International Bank for Reconstruction and Development (IBRD), has a 7-year grace period, and a maturity of 22 years.