“In a world where risks are multiplying – slower global growth, increasing numbers of forcibly displaced people, and abrupt changes in the environment due to climate change – low- and middle-income countries are asking us for more help,” said World Bank Group President Jim Yong Kim. “We’re encouraged that countries are turning to the World Bank Group for assistance. We’ll continue to meet the growing demand for innovative financial tools, leveraging donor funds into much larger low-interest loans, and our global knowledge to help countries address their most challenging issues.”

Commitments from the International Bank for Reconstruction and Development (IBRD)—which provides financing, risk management products, and other financial services to countries—hit $29.7 billion, up sharply from the previous year. Commitments from the International Development Association (IDA), which provides interest-free loans and grants to the world’s 77 poorest countries, totaled $16.2 billion in concessional financing in FY16. 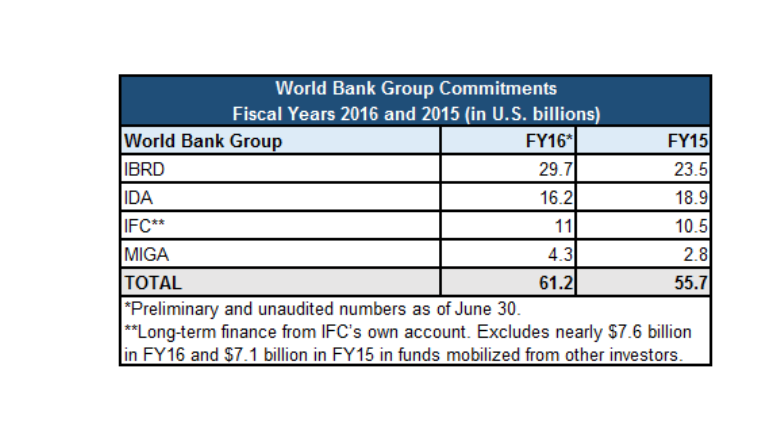 Demand for lending from IBRD and IDA has risen to levels not seen outside a financial crisis, and has climbed to more than $160 billion in support from FY13 to FY16. This increase in lending has come as the World Bank downgraded its prospects for global economic growth to 2.4 percent from 2.9 percent this year.

In FY16 the Bank Group continued to work with partners to deliver innovative financial solutions to address some of the world’s most pressing problems. With the United Nations (UN) and Islamic Development Bank, the World Bank launched the Middle East and North Africa (MENA) Financing Initiative to support Lebanon and Jordan, the countries that have taken in the largest share of refugees in relation to the size of their populations. The initiative will provide the kind of financing that is usually only available to the world's poorest countries.

And in 2016 the World Bank Group announced the launch of the Pandemic Emergency Financing Facility, an innovative, fast-disbursing global financing mechanism designed to protect the world against deadly pandemics and create the first-ever insurance market for pandemic risk. The facility will be operational in fiscal year 2017.

IFC maintained its strategic focus on the poorest countries and regions. It provided more than $5 billion in long-term financing to accelerate development in IDA countries, including funds mobilized from other investors. These countries accounted for nearly 30 percent of IFC’s total investments. Investments in businesses in fragile and conflict-affected areas climbed to nearly $1 billion, an increase of more than 50 percent over the previous year.

“In a year when economic and political upheaval is displacing and impoverishing millions, the private sector has a critical role to play,” said IFC Executive Vice President and CEO Philippe Le Houérou. “IFC’s impact over the past year highlights why we are uniquely positioned to leverage the power of the private sector and our six decades of experience to address the development challenges of our time.”

FY16 also was a strong year for IFC in providing advisory solutions. More than 60 percent of IFC’s advice was delivered to clients in IDA countries—including 20 percent in fragile and conflict-affected areas.

The Multilateral Investment Guarantee Agency (MIGA), the political risk insurance and credit enhancement arm of the World Bank Group, had a record year of $4.3 billion of issuance of political risk insurance and credit enhancement guarantees. As investors are looking for greater protection in this vulnerable economy, MIGA plays a vital role in helping to mitigate risks and navigate private investors to emerging markets. MIGA continued to focus on IDA countries, fragile and conflict-affected areas of the world, and climate change. As of June 30, 45 percent of MIGA’s outstanding portfolio is in IDA countries, and 10 percent in fragile and conflict-affected states.

“MIGA continued to encourage private investors to go into some of the most challenging markets,” said the Agency’s Executive Vice President and CEO Keiko Honda. “We achieved this by providing de-risking solutions to bridge the infrastructure investment gap, generate countless jobs and support sustainable economic growth.”

IBRD issued a record $64 billion in bonds in the international capital markets to support sustainable development programs in client countries. This fiscal year also marked the 125th World Bank green bond with $9 billion issued since the pioneering program began in 2008. IFC issued nearly $1.4 billion worth of green bonds in the fiscal year.

In the wake of the historic Paris climate change conference, the Bank Group release a Climate Change Action Plan to help countries deliver on their national plans for climate action. The Bank Group has already acted swiftly with, for example, a $625 million loan for India to support its grid-connected rooftop solar program. The Bank plans to provide more than $1 billion to support India’s ambitious initiatives to expand solar.  The Bank also unveiled an Africa Climate Business Plan in Paris and has already approved a $111 million climate smart agriculture project for Niger which will directly benefit about 500,000 farmers and agro pastoralists, with the aim of boosting productivity and resilience and reducing greenhouse gas emissions.

The Bank Group continued to help clients mitigate natural disaster and weather-related shocks. For the fourth time, IBRD provided disaster risk insurance against earthquakes and tropical cyclones in the Cook Islands, the Marshall Islands, Samoa, Tonga, and Vanuatu for aggregate coverage of $43 million on behalf of IDA through the Pacific Catastrophe Risk Assessment and Financing Initiative insurance.

In an increasingly uncertain global economic environment – currency, interest rate, and commodity price volatility and natural disasters continue to threaten development gains. The World Bank’s support to countries on risk management remains essential. The World Bank Treasury executed 26 transactions on behalf of client countries this year so they can manage exposure to changes in currency and interest rates for a total volume of more than $1.1 billion. In addition, the World Bank Treasury provided advisory services on public debt management to 33 countries and on asset management to 60 official sector clients, as well as financial products that meet our member countries’ risk management objectives.