SARAJEVO, September 28, 2015—Economic activity in the six South East European countries (SEE6[1]) is picking up speed, and growth in the region is expected to average 1.8 percent in 2015, compared to only 0.3 percent in 2014, according to the World Bank’s latest South East Europe Regular Economic Report (SEE RER). Private investment has become the main driver of regional growth in SEE6.

As 2015 progresses, the report says, economic growth throughout the region is stimulated by recovery in domestic demand and developments in the global economy.

The highest growth rates projected for 2015 are 3.4 percent for Montenegro and 3.2 percent for FYR Macedonia; the lowest is Serbia’s 0.5 percent. Although lagging behind rest of the SEE6 region, Serbia and Bosnia and Herzegovina are recovering faster than expected from the floods of 2014.

The economic recovery has encouraged job creation, and employment throughout the region is slowly picking up, with Serbia and FYR Macedonia reaching highest employment rates since mid-2009.  Yet, unemployment remains a key structural challenge; especially for the young. Youth unemployment in the region is still very high at about 45 percent, which has not only tremendous near- and longer-term economic costs, but also social consequences.

Therefore, while macroeconomic stability is necessary for sustained income growth, it is not sufficient; Structural issues such as labor market, competitiveness, public finances, must be tackled so that the SEE6 countries can accelerate growth and restart their EU convergence process which was stalled since the 2008 global financial crisis. Vigorously pursuing structural reforms while keeping the economy stable will provide the needed stimulus to potential growth. The structural reform agenda needs to be multipronged: stimulate employment by eliminating disincentives and barriers to formal jobs, support investment by improving governance and the business environment, and deepen international integration and connectivity. It also requires that public services and social protection systems be made more efficient and more equitable.

“Carefully prioritizing economic policies is essential for managing risks to the economic outlook of the region”, said Gallina A Vincelette, Program Leader and one of the authors of the SEE RER.  “Sustained reforms are needed to ensure macro-fiscal sustainability, particularly as financing conditions tighten, and to expand the space for using fiscal policy to mitigate future shocks.”

Attention of policymakers in the region, and in the EU, has also turned to the challenge of rising transit migration through the region.  The SEE6 countries have had a mature and compassionate response to the challenge of transiting refugees.  An important part of the policy challenge for the EU and governments in the region is to manage the humanitarian response while also focusing on how to avoid disruptions to regional trade, especially given that the SEE6 countries are part of production networks that end in Western Europe.

The current refugee flow may also impact the potential for outmigration from SEE6 to EU member states going forward, with important implications for labor markets and remittances at home.  This gives further impetus to SEE6 countries to take policy actions to mitigate the negative impact of ongoing demographic transformations in their countries, in particular the aging and shrinking of its societies.

“Creating incentives for greater labor force participation, investing in human capital, reversing the trends of high emigration, and creating income generating opportunities at home will help motivate young individuals to stay or return from abroad”, said Ellen Goldstein, World Bank Country Director for South East Europe “thereby not only addressing the challenge of aging but also increasing the quality and quantity of human capital in the Balkans.” 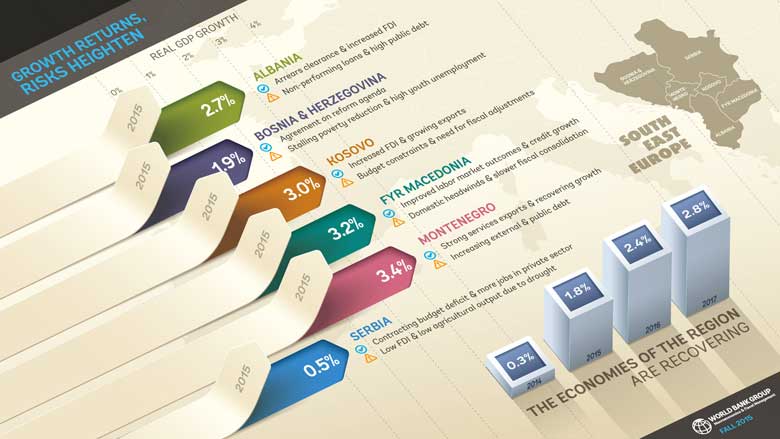