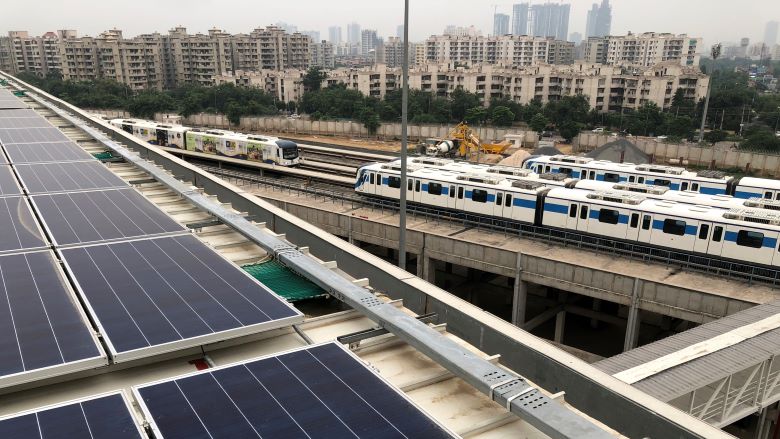 The COVID-19 pandemic has hit all countries hard. In countries like India, it also exposed the need for reliable health care and infrastructure to deliver lifesaving refrigerated vaccines. As the country also contends with seasonal heat waves and power shortages, the role of renewable energy – particularly solar energy – in meeting those challenges has come into sharp focus. For many, especially in India’s rural communities where the pandemic is wreaking havoc, reliable electricity can mean access to hospitals and medicines: quite literally, the difference between life and death.

Well before COVID-19 struck, India was determined to reap the benefits of solar power. The country set itself an ambitious target: 100 gigawatts (GW) of solar generation capacity by 2022. That would be a boon for its commercial and industrial consumers, who account for 74% of installed energy capacity, compared with 13% of installed capacity for residential customers and public sector organizations.

As of December 2020, it had 38.8 GW of installed solar capacity, including ground-mounted and rooftop operations. Solar is also powering other essential infrastructure, including transport. One of India’s flagship solar projects, the giant Rewa solar park, powers the New Delhi metro rail system: a network that serves over 2.6 million commuters daily. Vital government-led initiatives like 24x7 - Power for All, which committed to providing each household access to electricity around the clock, are helping to empower communities – both literally and figuratively, improving the quality of life.

Still, about 250 million Indians still live without access to electricity, which is why India’s path towards fully realizing its renewable energy potential could be a gamechanger: for its own citizens certainly, as well as for global efforts to tackle climate change and as a guide for other countries as they invest in solar energy.

Getting solar projects off the ground is no easy task. It requires the right policies and regulatory frameworks; overcoming hesitation around adopting new technology; and the provision of concessional or de-risking instruments to encourage private capital to flow. In addition to providing this kind of support – from concessional finance to establish the solar parks in Madhya Pradesh to supporting enabling policies and bringing the private sector to the table – the expansion of solar in India offers key lessons to boost clean energy investments around the world.

To meet the growing need for clean energy, India is ramping up solar power generation. For example, 60% of Delhi Metro’s daytime energy requirement is being met through solar power.

Rooftop Solar’s Potential in Nigeria
India’s experience with rooftop solar and solar farms offers exciting possibilities for Nigeria. The densely populated African country loses 45% of its produce after harvest because it can’t be kept cold, resulting in a 25% loss of income for its 93 million smallholder farmers. A pilot project at a food market in Sokoto, Nigeria, aims to change that by testing the business case for refrigeration fueled by rooftop solar units. If it succeeds, the project will demonstrate the potential of this technology for commercial and industrial consumers – the target market for rapidly scaling up solar rooftop capacity – and transform the lives of millions of farmers.

The World Bank Group’s Scaling Solar program supports a similar auction process in countries like Zambia, to create viable solar markets. The Bangweulu solar plant in Lusaka’s Multi-Facility Economic Zone is expected to supply electricity to as many as 30,000 homes and businesses, complement the country’s hydro-based electricity supply and save electricity purchasing costs for the government.

And in May 2021, Senegal announced through the program that two new solar PV plants will provide access to electricity to nearly 540,000 people at some of the lowest rates in Sub-Saharan Africa. Located in the country’s Western region, the new solar plants in Kael and Kahone will help avoid 89,000 tons of carbon dioxide emissions annually.

Building a Solar Knowledge Exchange
In partnership with the India-led International Solar Alliance, the Bank’s Lighthouse Initiative is supporting a pipeline for the exchange of solar knowledge between Indian agencies and their counterparts in many other countries like Bangladesh and the Maldives and others in Africa.

Although geographically and economically diverse, the energy challenges developing countries face reveal common starting points for solutions tailored to each nation’s unique needs. Learning from India’s experiences, whether in small island states or emerging economies in Africa, puts into practice a quotation from Mahatma Gandhi included in India’s 2015 climate target: “One must care about the world one will not see.”