Education For All: Making Education Inclusive, Accessible to Uganda’s Children With Special Needs 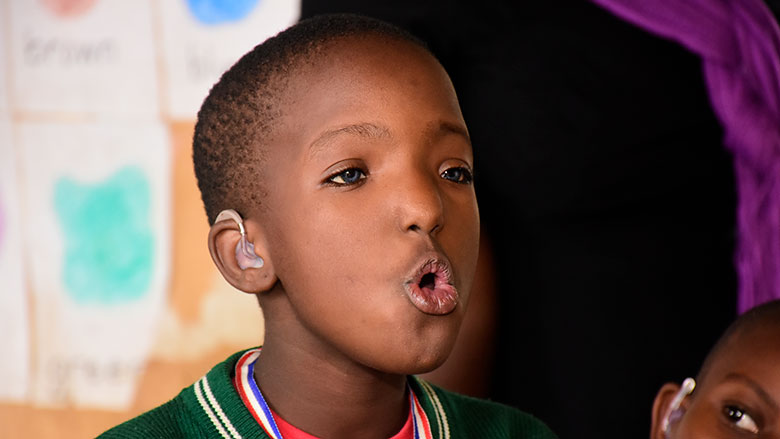 Nafula, 8, reads aloud in class at Seeta Church of Uganda primary school. She is one of hundreds of students whose hearing is much improved after being fitted with a hearing aid.

KAMPALA, February 7, 2020 – When Tracy Nafula was born eight years ago, her family was delighted to have a beautiful, healthy baby girl with sky blue eyes. But as she grew, her parents noticed that she was having trouble hearing.

“They realized the baby had a hearing impairment and all of a sudden there was stigma from people who were claiming that the baby had been cursed,” said Flavia Anyango, Tracy’s aunt.

Anyango never believed in the curse, and as the years went by and communication grew more difficult for Tracy, she convinced her parents to let her go to school. She joined 1,000 students at the Seeta Church of Uganda primary school, 20 kilometers east of Kampala, the capital city. Although the school was founded by the Anglican church, it receives government aid.

In July 2018, Tracy and 28 other students with hearing impairments were screened and assessed. A month later, a team of officials from Uganda’s Ministry of Education and Sports and the Minnesota-based Starkey Hearing Foundation fitted all of them with hearing devices.

“Until last year, I could not hear well,” said Tracy. “After I was fitted with the hearing aid, my hearing is much better, and now I enjoy coming to school.”

The hearing aids distributed to Tracy and her schoolmates were procured through the Uganda Teacher and School Effectiveness Project (UTSEP) financed by a $100 million grant from the Global Partnership for Education and supervised by the World Bank.

With the help of UNICEF, the government successfully entered into a partnership with the Starkey Foundation to carry out a countrywide assessment of learners with hearing impairments and was able to supply hearing devices to 1,554 students from 296 primary schools in 79 districts across Uganda.

The Foundation also trained 24 facilitators to be able to identify and fit people with audible hearing loss to hear better, as well as teachers and parents. The facilitators also received testing equipment, including the hearing aid screening kit and hearing aid fitting kit. The kits include Diagnostic Audiometers, Tympanometry, and Autodynamics, with accessories to be placed in referral hospitals to cater to more patients.

Uganda is one of the pioneers in Sub-Saharan Africa in terms of setting the goal to achieve universal access to basic education. After introducing the Universal Primary Education (UPE) project in 1997, primary school enrollment increased at a rapid pace, growing from 2.5 million learners in 1996 to 8.3 million in 2015. But while the expansion of primary education has been pro-poor and has greatly improved access to primary education for children of underserved families, children with disabilities are yet to fully benefit from the campaign. These include children with muscular dystrophy, multiple sclerosis, epilepsy, Down syndrome, autism, dyslexia, processing disorders, bi-polar, oppositional defiance disorder, blind, visually impaired and deaf, among others.

Monica Kisambira, head of the Seeta Church of Uganda Primary School department of special needs, said she had difficulty communicating with the children with hearing impairments. Although her specialty was in visual impairment, she had to learn sign language to cater to the high numbers of deaf children at the school. Under-funding of the special needs departments in many schools means they do not have enough trained teachers or scholastic materials and teaching aids to be effective.

“Our children here are very brilliant but have some pressing needs,” said Kisambira. “The department only has four teachers and some parents who come to volunteer. I would urge the general public to go and learn sign language, because disability is not inability.”

While the UPE policy resulted in considerable gains in terms of access to primary education, this has not been matched by progress in learning outcomes. Only 6% of students in Uganda can read a paragraph at the end of the fourth grade (P4), which is well below other countries in the region. Numeracy skills are equally poor - only 2% of students in Uganda can solve a simple, age-appropriate mathematics problem by the end of P4. This is much below peers in Kenya and Tanzania, who achieve 10% and 9%, respectively.

““We are building capacities through trainings, procurement of assistive devices, though we should admit that the numbers are big,” Onen told the Daily Monitor in June.

“The Uganda Constitution stipulates that public financing for special needs and inclusive education should account for 10 percent of the education budget,” said Diana Sekaggya-Bagarukayo, World Bank Education Specialist in Uganda. “But it currently stands at 0.1%, an indication that more needs to be done to resource the teaching and learning of learners with disability.”

The report, says the government needs to raise its expenditure on education from the current  10% to match the Sub-Saharan average of 16% to reap the full benefits of developing its human potential, which is essential for countries to increase productivity to grow their economies and improve the well-being of their citizens.

According to the World Bank’s Human Capital Index, a child born in Uganda today will be only 38% as productive when she grows up as she could be if she enjoyed complete education and full health.  A child in Uganda completes seven years of education by age 18, compared to 8.1 for their regional counterparts. However, actual years of learning are only 4.5, with 2.5 years considered ‘wasted’ due to poor quality of education. Children with special needs like Tracy are more likely to waste their learning years if they do not receive the ‘special’ attention they deserve to have a fair chance to succeed.