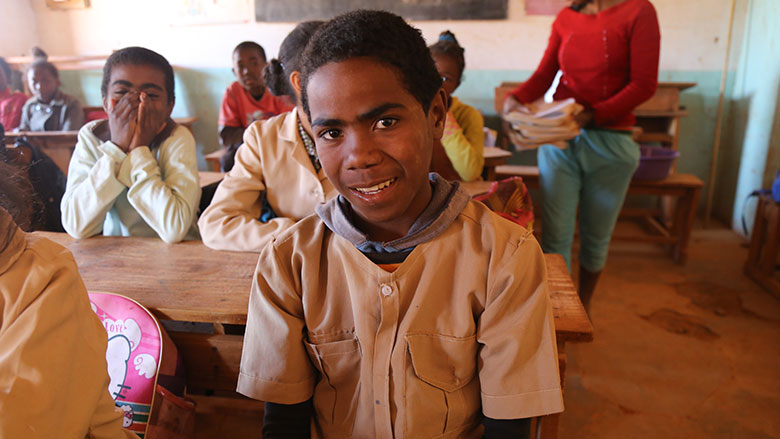 Justin is happy to be back in school after two year away. He had to drop out when his parents could not afford fees.

In 2009 following political crisis, public spending on education fell as foreign funding plunged. Thousands of children were at risk of being taken out of school. Emergency support has led to scaled up funding that is overhauling basic education. 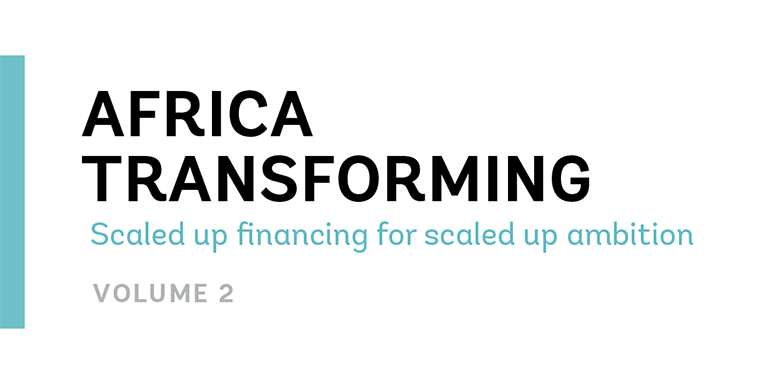 Justin is 14 years old. He is in 5th grade, but his friends are already in lower secondary school. He had to drop out of school in 2014 when his parents could no longer afford to pay for his education. After the political crisis in 2009 that shook Madagascar, his parents were unable to make ends meet.

Justin’s mother explains, “My husband is a builder and work was very scarce. I’m a seamstress and it’s even worse in a crisis when people don’t buy clothes. I have five children and food is our priority. I had to take Justin out of school.”

In 2016, his school was able to access funds so Justin could return to class free of charge, but he had been away for two years.

“I have a lot of catching up to do. All my old friends are already in 8th grade, but that’s okay. I’m happy to be back at school. I dream of being a teacher,” smiles Justin. 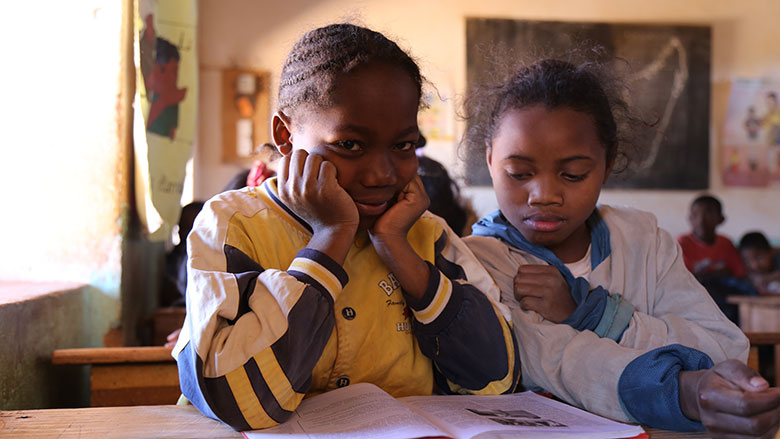 MESEA aimed to keep as many children in primary school as possible by reducing costs borne by families, paying subsidies to teachers, and providing school kits to students.

Justin’s school, Ankadindambo public primary in the Analamanga region, is one of many that benefited from the Madagascar Emergency Support to Education for All Project (MESEA). Launched in 2013 by the World Bank with a Global Partnership for Education grant, it worked to shore up a crumbling education system.

With a sharp drop in foreign financing, public spending on education had fallen since 2010. This meant that nationwide, very few schools were built, teacher and student materials were not supplied, and few schools received any government funding.

MESEA aimed to keep as many children in primary school as possible by reducing costs borne by families, paying subsidies to teachers, and providing school kits to students. It supported student learning by providing teacher and principal training, textbooks, classrooms, school cafeterias, and school grants.

By the end of the four-year project, MESEA was deployed in 12 Malagasy regions, reaching over 2 million direct recipients. Nearly 1.9 million children were enrolled in school, some 20,000 teachers got paid, and over 5 million school kits were distributed. In Madagascar’s three drought-stricken regions in the south, MESEA enabled over 100,000 children to have meals in school cafeterias. More than 260 classrooms were built, and over 50,000 teachers trained. 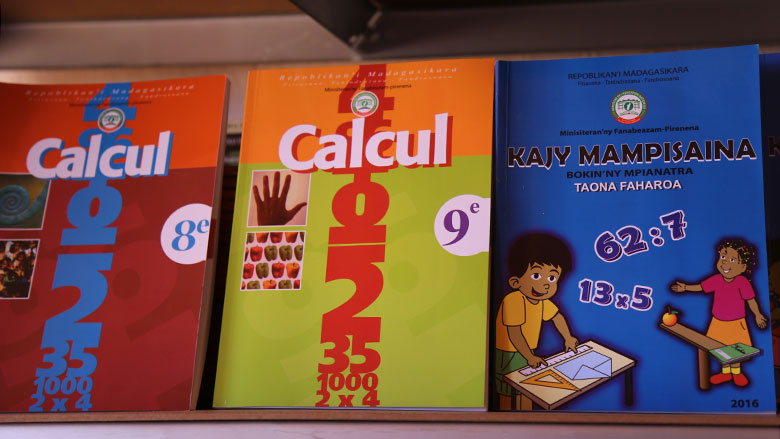 Nearly 1.9 million children were enrolled in school, some 20,000 teachers got paid, and over 5 million school kits were distributed.

New funding, largest ever for education

MESEA also paved the way for the newly launched Basic Education Support Project funded by the World Bank and the Global Partnership for Education. The $100 million project is designed to improve learning outcomes in the first two years of basic education in Madagascar.

This funding, which includes $55 million from IDA18, is the highest ever granted to assist education in Madagascar. It will support implementation of reforms outlined in the country’s 2018-2022 Education Sector Plan. The project aims to reach over 4.7 million beneficiaries. That includes enrolling 4.6 million children in primary school and 80,000 children in early learning centers, as well as training 35,000 primary school teachers, 6,500 pre-primary community educators, 4,000 community-school board members, and 20,000 principals and local supervisors.