Sint Maarten one year after Irma: resilience in the making 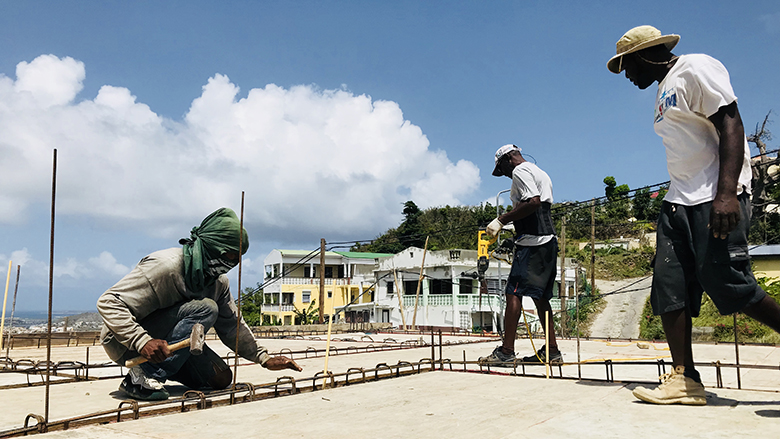 Sint Maarten made remarkable progress since Irma passed last year. Nevertheless, given the massiveness of the devastation, rooftops and houses are still being repaired 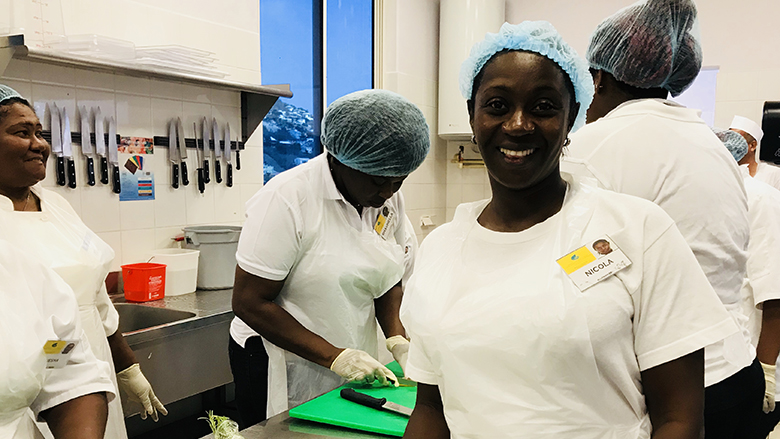 Nicola Allen is a woman with sparkling eyes and an energetic smile, but her face turns somber when she thinks back on September 6 of last year, the day Irma, a category five hurricane, wrecked her country. Her house flooded, she lost all her belongings including her furniture and she ‘was very, very scared’ for her five-month-old son and 10-year-old daughter. She also lost her job in the kitchen of a hotel that was destroyed by the hurricane.

A few months later, she was back in a professional kitchen, with dozens of others learning new culinary and food preparation skills and being paid a stipend for her training. At first, she was nervous. “It was right after Irma, and it was a very stressful time. I was just trying to cope with the situation after the hurricane,” says Allen.

She is now convinced that this was the right thing to do. “I am learning so many new skills. And I prefer to work. I will get a certificate which will be valuable everywhere I apply for a job. After this, I will be able to go back to culinary work, but at a higher level.” 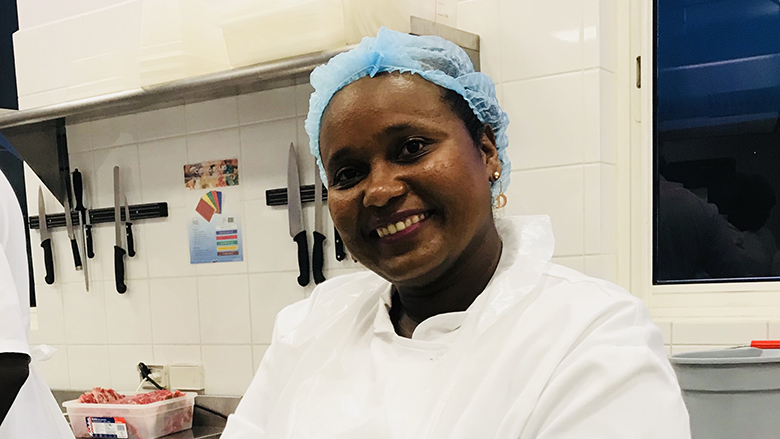 Classmate Aiesha Fleming fully agrees and describes the program as ‘wonderful’ and ‘a very positive environment’. She and her husband lost almost everything because of the hurricane: the roof and windows of their house, many of their belongings. “This program helps me to move on. I can put my mind to useful things,” says Fleming.

On the job training

The program in which Allen and Fleming participate was set up by the private sector in the aftermath of hurricane Irma. With several hotels destroyed and others severely damaged, many people in the tourism sector, which accounts for almost half of Sint Maarten’s GDP, lost their jobs and their only source of income. To sharpen employee skills while preventing mass layoffs, key actors in the tourism industry, launched the Sint Maarten Training Foundation (SMTF) and started the Hospitality Training Program later financed with Government’s support.

Since the program started in December 2017, 860 students, of which 60 percent are women, have been trained. Participants receive hands-on training three times a week as well as a stipend during their training period.

Building on this success, the Sint Maarten Recovery, Reconstruction and Resilience Trust Fund, funded by The Netherlands, recently launched the ‘Emergency Income Support and Training Project, a collaboration between the government, the World Bank, local vocational training institutes and SMTF.

In the coming months, the training program will be expanded to the construction, boating maintenance, and general hospitality service sectors. Approximately 1,800 people over an 18-month period are expected to receive skills-training and certification, related income support, as well as health insurance and travel costs. 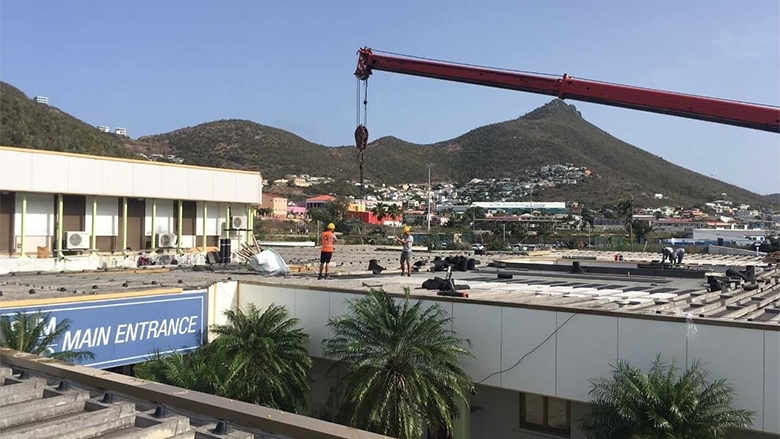 Showing remarkable resilience after Irma, Sint Maarten has made steady progress since the hurricane: the school year started with new energy, resources and materials in the classrooms; shops are open or putting the finishing touches on renovation projects, and hotels are getting ready for the upcoming tourism season.

Nevertheless, the scars of the biggest hurricane ever recorded in the country remain visible. Rooftops and houses are still being repaired and some families remain without permanent shelter while others are reduced to living in only one bedroom, as materials, workers and funds have been too scarce to rebuild their houses.

The National Recovery and Resilience Plan (NRRP), approved by Parliament, estimates damages and losses related to hurricane Irma at US$ 1.38 billion and US$ 1.35 billion respectively (each at about 129 percent of GDP). It also underlines the continued urgency of meeting the needs of the people of Sint Maarten and to focus on community resilience, economic resilience and government resilience.

Irma brought important lessons about how to prepare for a disaster. Clive Richardson, commander of the Fire Brigade, is trying to instill a greater sense of community and ‘hurricane-awareness’ through public messages. “Since the beginning of the hurricane season, we are trying to make clear that taking care of your own yard, the neighborhood and communities – like clearing of rubbish and loose materials which can become dangerous flying objects when a storm hits– will actually help in case of an emergency.”

Improving disaster preparedness is a key focus of a new Emergency Recovery Project which will repair public shelters, roofs and low-income houses, increase the resilience of the electricity utility and water system, and strengthen the emergency response capacities of the fire brigade and first responders.

“We will have a mobile phone app that will give real-time information about traffic, road conditions and other safety tips. Still, the app only works for those who have downloaded the program. So, in addition, we are developing an alert broadcast system over radio and mobile telephones, which will push out messages,” Richardson explains.

Hurricane Irma has also made new realities clear. Right before the devastation of Irma, the Sint Maarten Medical Center (SMMC) had completed designs and a financing package for a new, larger, and more modern hospital to serve the needs of the island’s growing population. However, it became clear after Irma that a higher level of specifications was needed.

“Before Irma, we considered roofs, walls and windows that can withstand 160 miles per hour windspeeds to be safe. We now upgraded the specifications, so the building will withstand windspeeds of 200 miles per hour. That means using different, more expensive materials and a rooftop entirely made of concrete,” says Erika Van der Horst, Facilities Manager of SMMC. The critical rehabilitation of the existing hospital and construction of a new and larger facility, more resilient to climate shocks was approved last month and will improve the scope and quality of health services at the hospital.

“With the financing we can fortify the existing building and double our generator capacity, to ensure the continuity of essential medical services in case of major power interruptions which are to be expected during and after hurricanes,” says Van der Horst.

The project will also upgrade the existing operating theatre complex, increase the dialysis capacity and expand in-patient care by creating additional patient rooms.  “The expansion of services locally will reduce the medical referrals abroad. For a relatively small investment, we will see great returns in the short term” adds Van Der Horst.

About the Recovery, Recovery and Resilience Trust Fund:

The World Bank manages the US$ 580 million (Euro 470 million) Recovery, Reconstruction and Resilience Trust Fund, established in April 2018 and financed by the Government of The Netherlands, to help Sint Maarten build back better and increase resilience following the devastation caused by Hurricane Irma. As of today, US$ 134.4 million was transferred by the Government of the Netherlands to the Trust Fund and a total of US$102.7 million was approved for three projects: An Emergency Recovery Project (US$55.2M), an Income Support and Training Project (US$22.5M), and a Hospital Resiliency and Preparedness Project (US$25M).