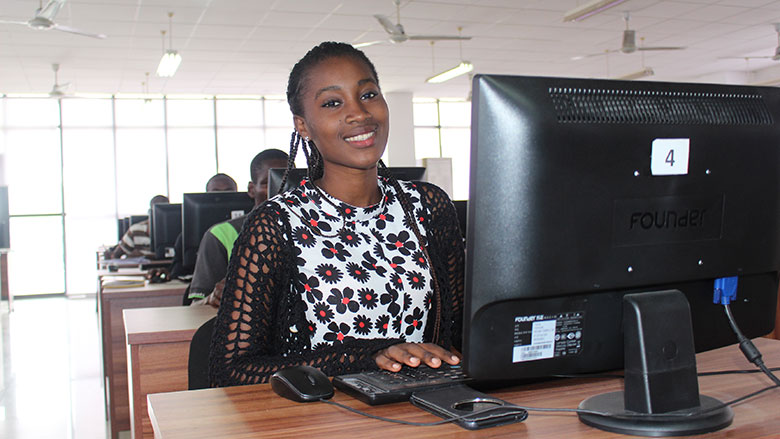 A student of the Faculty of Sciences at the Université Marien Ngouabi, Brazzaville, Marinette Moyo cannot imagine how she would be able to complete her studies without the internet.

BRAZZAVILLE, April 9, 2018‒A student of the Faculty of Sciences at the Université Marien Ngouabi, Brazzaville, Marinette Moyo cannot imagine how she would be able to complete her studies without the internet. Like her classmates, whether she is in class or at home, she does not let go of her mobile phone or laptop. How could she do without online search engines to give a presentation or study for an exam?

It is the same for Gilles Massamba, a young, tech-savvy film promoter, and for numerous other Congolese nationals for whom the internet has become an indispensable social, administrative, and professional tool. The problem is that when the connection lags and is sporadic and expensive, you lose time, patience, and money. It is difficult to wait for 20 minutes to download a document or to be constantly disconnected during a Skype conversation with a relative living in the country’s interior.

"Studies conducted in Africa, particularly by the World Bank in 2010, prove that a 10% increase in the number of high-speed internet connections leads, among other things, to an increase in economic growth of 1.3%"
Jérôme Bezzina
World Bank task team leader and telecommunications specialist 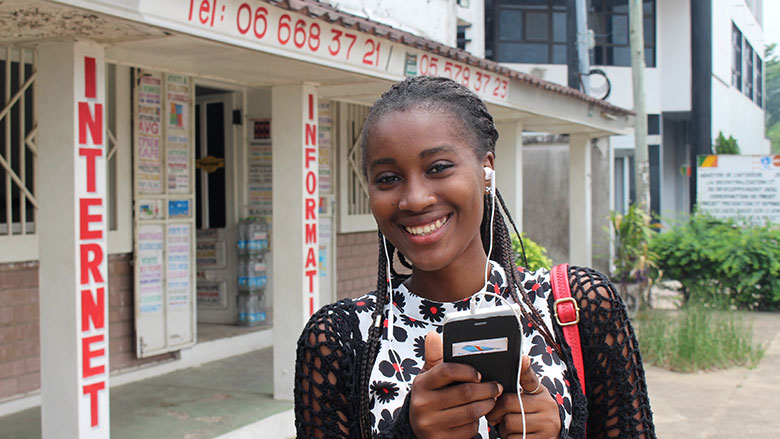 In the Republic of Congo, it is estimated that the ICT sector represents 4% of GDP. With better infrastructure, its contribution is expected to be even greater, especially in the services sector where it already figures prominently

“For the majority of Congolese people, fiber optics remained an abstract notion,” Gilles says. “Until a ship sailing along the coast of Pointe-Noire accidentally severed the submarine fiber-optic cable. Then, everyone made the connection because no one had internet in Brazzaville anymore. It’s scary to think that it is all hanging by a thread, both literally and figuratively.”

In many ways, development of the digital economy and the achievement of regional integration in Central Africa are “hanging by a thread.” More specifically, they are hanging by the fiber optics that are in the process of being installed under the Central African Backbone (CAB) project, the first phase of which was completed on April 6, 2018 with the interconnection of the fiber-optic backbone between the Republic of Congo and the Republic of Gabon.

Launched in April 2007 by the countries of the Central African Economic and Monetary Community (CEMAC), during the summit in Ndjamena, Chad, the Central African Backbone (CAB) project aims to promote subregional integration and reduce the digital divide through high-speed, fiber-optic terrestrial infrastructure. The aim is to boost the capacity of the digital link among the 11 CEMAC countries.

“It is the culmination of a decade of ongoing efforts and the fulfillment of the strong ambition expressed by the leaders of the subregion to anchor the countries in the digital economy and thus promote regional integration,” explains Yvon-Didier Miehakanda, coordinator of the CAB project in the Republic of Congo.

The first phase of this project was launched in the Republic of Congo in July 2011 with $30 million in joint financing from the Government and the World Bank. The goal? Build a 521-kilometer fiber-optic backbone (reduced later to 504 kilometers) between the Matombi landing station (from the ocean city of Pointe-Noire) and the border landing station in Mbinda. The work was completed by the Chinese company Huawei, a global telecommunications leader, in collaboration with  the Congo–Ocean Railway (CFCO), which facilitated installation of the fiber-optic cable along the railway.

The Congolese backbone continues up to the border city of Lekoko where it connects to the 1,100 km of the Gabonese terrestrial network, which runs up to Libreville.

This new interconnection infrastructure with Gabon gives the Republic of Congo a second fiber-optic connection point that will allow the country to ensure a relay connection in the event of a new breakdown of its submarine cable, which was commissioned in 2012, or of the Matombi connection point in Kouilou.

The first phase of the recently completed CAB project gives way to the second phase, which involves the construction of two new fiber-optic networks in the north of the country in order to connect the Congolese network to the Cameroonian and Central African networks by 2020. Cofinanced by the African Development Bank and the Congolese Government to the tune of 66.56 million euros, this second phase includes, among other activities, the construction of a national “Datacenter” to host data and a technology hub to develop new technologies and the digital economy.

Finally, the third phase of the project, financed exclusively by the World Bank for $5 million, is expected to create a digital economy development fund aimed at financing the development of start-ups and job creation in this sector.

“If this new infrastructure effectively helps enhance internet service in the country, the logical consequence should be the lowering of connection costs for users,” states Aymar Kodia, a young, seasoned internet user. “And that is good news, because the current rates charged by both public and private operators are simply exorbitant (1 Mb costs CFAF 65,000 or $122!).”

On the heels of installing the fiber-optic network, the CAB project also equipped the public university with software tools and interconnected the 11 higher education establishments in Brazzaville. The students are now waiting for the national telecommunications operator, Congo-Telecom, to activate high-speed internet so as to fully benefit from the new technological environment available to them. “I can already see myself having access to unlimited documentary resources, downloading huge files freely, doing research or taking online courses like students in developed countries. That would be really great!” says Marinette.

“Studies conducted in Africa, particularly by the World Bank in 2010, prove that a 10% increase in the number of high-speed internet connections leads, among other things, to an increase in economic growth of 1.3%,” explains Jérôme Bezzina, World Bank task team leader and telecommunications specialist. “In the Republic of Congo, it is estimated that the ICT sector represents 4% of GDP. With better infrastructure, its contribution is expected to be even greater, especially in the services sector where it already figures prominently.”