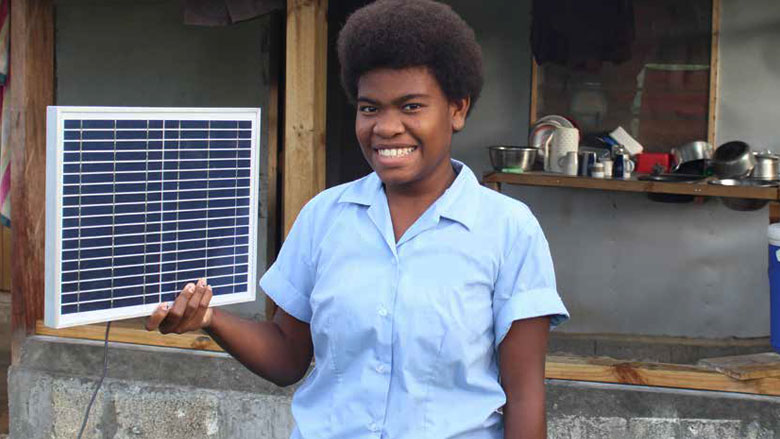 Half price subsidies for “Plug and Play” solar home systems

Vanuatu, May 22, 2017 - Like many Pacific Island countries, Vanuatu is a dispersed nation, with islands scattered across vast distances, and many remote communities never having access to electricity. In 2014 Vanuatu launched its rural electrification project, with assistance from the World Bank and the Government of New Zealand, in order to provide electricity for remote areas of the country.

During a recent visit to the region, World Bank Vice President for East Asia and the Pacific, Victoria Kwakwa was able to see first-hand the positive impact the program is having.

Pang Pang Village is a remote community on the coast of Efate Island, about 45 kilometers east of the capital, Port Vila. It was here that Victoria met local resident Lina Bae, previously one of the 75 percent of the population who had never had access to electricity. Through the project, Lina was able to purchase a solar power kit, allowing her to light her home and charge her phones other mobile devices.

After a display of the new solar lighting systems, Lina explained how in the past they relied on dangerous kerosene lamps and candles for light. Today she is happy that her children are able to read and study in the evenings after school, and feels content to leave a light on all night for her young children’s safety.

The Government of Vanuatu has set a target of 65 percent power generation from renewable energy by 2020 to increase energy security and fight climate change. With this project, 17,000 households throughout Vanuatu will be supported to access non grid, renewable electricity through solar.

With low population densities and large distances between communities, a key challenge for the project has been providing access to electricity in a way that is cost effective and efficient.

To do this, the project is subsidizing 50 percent of the cost of solar power systems for families. Community-operated and managed health posts and not-for-profit community halls also have access to subsidies to purchase solar systems. Initially, the project is focusing on solar power systems that are “plug and play” – installed easily by the owner and requiring little to no maintenance other than replacing batteries. These systems provide lighting and phone charging capabilities, with some systems able to support other uses such as radios and small televisions. 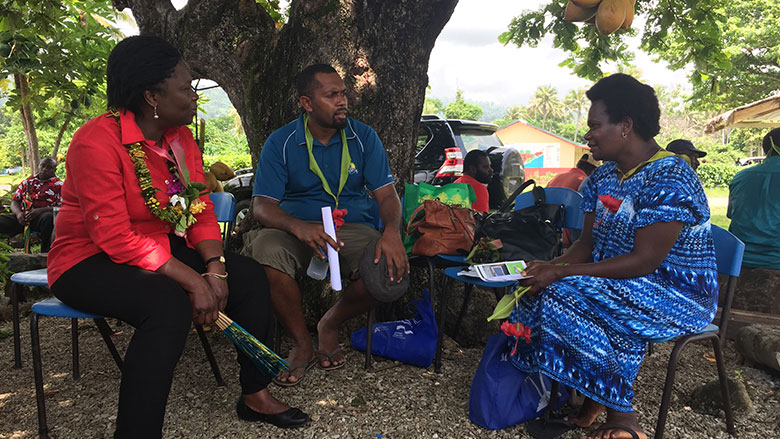 At the same time, the project is helping eligible low income families access the main electricity grid through subsidies of up to 80 percent of the cost of household connection and wiring – making electricity access a reality for more than 4,000 of Vanuatu’s lowest-income families.

To support the government’s goal of achieving 90 percent access, the World Banks is working with the Scaling-Up Renewable Energy Program under the Climate Investment Fund and the New Zealand Government to scale up the rural electrification project that will supply larger solar home systems, micro grids and mini grids with an overall investment of US$35 million, to achieve an access target of 85 percent.