An Essential Role, a New Approach 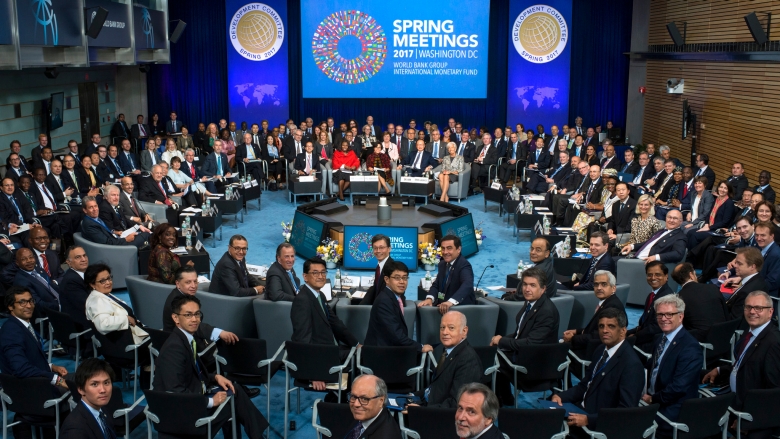 Even as the global economy begins to strengthen, major risks remain for developing countries and the world’s poor. The World Bank Group retains an essential role in helping ensure that growth is sustainable, with benefits that reach everyone and help reduce poverty and inequality.

The committee, which represents 189 member countries, reiterated its support for the Bank Group’s role in tackling a wide range of challenges in the global public goods arena and its work to develop a comprehensive approach to crises.  On the urgent issues of famine and forced displacement, the committee cited both “efforts to mobilize and rapidly disburse support for countries, communities, and refugees” and the importance of “investing to address the root causes and drivers of fragility and helping countries build institutional and social resilience.”

World Bank Group Jim Yong Kim addressed this new approach in his opening remarks to the press at the beginning of the meetings.  The Bank Group is working closely with the UN and other global partners on a coordinated and effective response to famine in parts of East Africa and Yemen.  At the same time, Kim emphasized that “we will use every tool we have, financial and advisory, to prevent famine in the future.”

On the refugee crisis, in a speech at the London School of Economics in the lead-up to the meetings, Kim noted major efforts that address urgent needs while supporting long-term development objectives. IDA, the Bank Group’s fund for the poorest countries, has allocated $2 billion over the next three years to support low-income countries that are hosting refugees.

A complementary initiative addresses the cross-border nature of forced displacement. As Kim explained, “For the first time, we’re also providing concessional, essentially below-market interest financing to any middle-income country hosting refugees through our new Global Concessional Financing Facility, starting with support to Jordan and Lebanon, who are hosting millions of Syrian refugees.”

The committee’s communiqué and the statements by Kim stress the need to address doubts that many people feel, in developed and developing countries alike, whether they are benefiting from a more interconnected and economically integrated world. Some of this is rooted in inequality; the committee notes that “gains have not always been shared evenly within countries.” Kim’s speech in London also highlights a “convergence of aspirations,” as technology makes it easier for people to compare their income prospects and quality of life with others around the world. He noted the risks: when people have “no opportunity to achieve those aspirations, frustration may very well lead to fragility, conflict, violence, extremism, and eventually migration.”

To meet the ambitions embodied by the world’s Sustainable Development Goals – as well as growing aspirations --, he and the committee have emphasized a major shift in thinking about development finance: the need to mobilize funding on a much larger scale, with a stepped-up role for investments from the private sector.

For many projects crucial to development, even in the poorest countries, the Bank Group sees untapped potential for private investment, on commercial terms. As the committee puts it, development partners can “prioritize private sector solutions when deploying scarce public resources, including for infrastructure.” The Bank Group can help by reducing risk, both real and perceived, for investors, while also helping ensure that projects really work for poor countries and poor people.

As Kim states in his speech, there “has never been a better time to find those win-win solutions. The trillions of dollars sitting on the sidelines, earning little interest, and the investors looking for better opportunities should be mobilized to help us meet the exploding aspirations of people all over the world.”