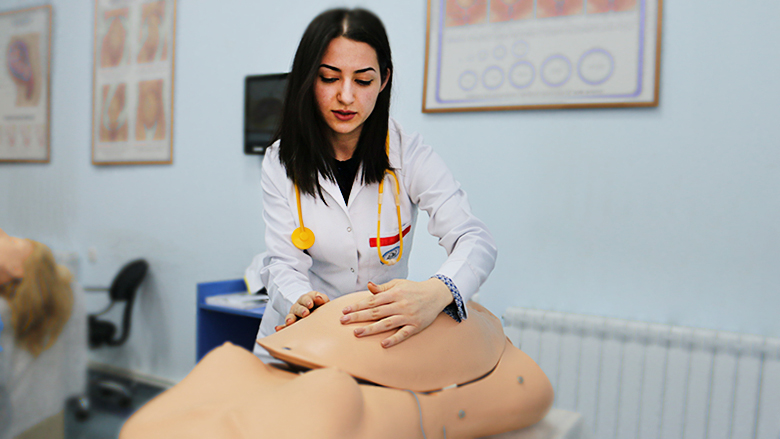 Tereza Sahradyan is a fifth-year student at Yerevan State Medical University who wants to major in surgery. She takes every opportunity to gain hands-on experience before becoming a professional practicing doctor. That is why the Practical Skills Simulation Training Center, housed at the university, is the perfect training environment for her.

Opened just three years ago, the Center has 16 rooms that are designed to mirror real hospital conditions. Here, students can practice different medical scenarios on electronically controlled mannequins and models that simulate physiological symptoms, and respond to the students’ actions.

“The practical courses offered by the Center are extremely useful,” says Tereza. “When I eventually get to work a shift in the surgery unit of a hospital, I will almost certainly know what to do.”

In the Center, students study patients’ records, handle diverse medical cases that replicate actual healthcare settings, and propose treatment options. When an action is taken correctly, the simulators respond and the screen shows that the heart has regained its ability to function properly.

“Here, they can make a mistake a dozen times and that is fine, acceptable, but in real life they won’t have this option,” says Suren Hovhannisyan, DMedSc, Head of the Center.

Lilit Zurnajyan is also in her fifth year and, like many of her peers, she looks forward to attending the classes at the Center because she can put her knowledge to practice. “I am still in a limbo,” jokes Lilit, “but these lessons will finally help me to identify a profession for life.”

The Center has been set-up to function like a resuscitation unit, an intensive care unit, an obstetrics and gynecology unit, a surgery unit, and a military medical corps. 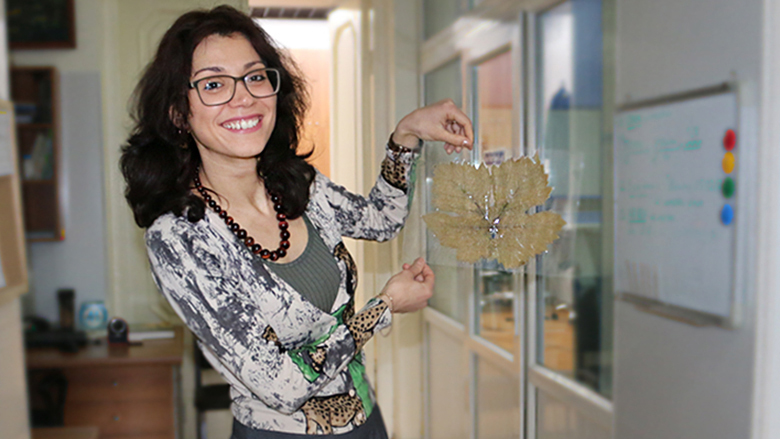 Nelli Hovhannisyan, Director of the Center and Head of the Department of Ecology and Nature Protection at Yerevan State University

" We did not have such facilities in the past, while our graduates used to end up in various laboratories and companies where they had to work with methodologies and technologies they weren’t familiar with. Now, they can confidently enter the labor market. "

Similar to the Medical University, the Department of Biology at Yerevan State University (YSU) also strives to maintain quality assurance and train students in accordance with current labor market needs. To this end, the university established the Innovative Center for Bacteriological Biotechnologies and Biofuel.

Karen Trchunyan, the Innovative Center coordinator, describes how every piece of equipment was acquired and notes with pride that all of them are modern and extremely accurate.

“We did not have such facilities in the past,” says Karen, “while our graduates used to end up in various laboratories and companies where they had to work with methodologies and technologies they weren’t familiar with. Now, they can confidently enter the labor market.”

In addition to equipping students with knowledge and skills, the Center also conducts scientific research – which is currently focused on understanding how to derive cheap biofuel from hydrogen.

“My involvement in the research experiments means a lot to me; it’s a fantastic experience,” says Satenik Mirzoyan, an MA student in her second year. “I simply don’t want to leave the lab. It’s another world of professional magic!”

Emil Gevorgyan, Dean of the Biology Department at YSU, believes that the Center’s high-tech equipment provides a great opportunity to embark on a new level of scientific research, one that is in line with internationally accepted academic standards.

To facilitate networking with manufacturers and to expand research opportunities, YSU opened another Center of Excellence for Applied Biosciences three years ago. The Center promotes inter-professionalism and inter-subject correlation, by bringing together various professionals such as archaeologists and agrarians. Armenian scientists can now conduct research that previously could only be done abroad.

“Our team of archeologists discovered mills dating back to the first century. We now can identify the type of plants using remnants in the small holes of stones. We did not have these options before,” says Iskuhi Manukyan, a researcher.

The Center is also undertaking extensive research into the maintenance and retention of genetic varieties of grapevine. The ongoing study suggests that there are 300-400 varieties of grape in Armenia, while in reality only three or four types are used.

“Our task is to collect all the varieties in the country, study them and provide options for their preservation. We not only study the varieties found in vineyards, but also the ancient remains of grapes,” says Nelli Hovhannisyan, Director of the Center and Head of the Department of Ecology and Nature Protection at YSU. 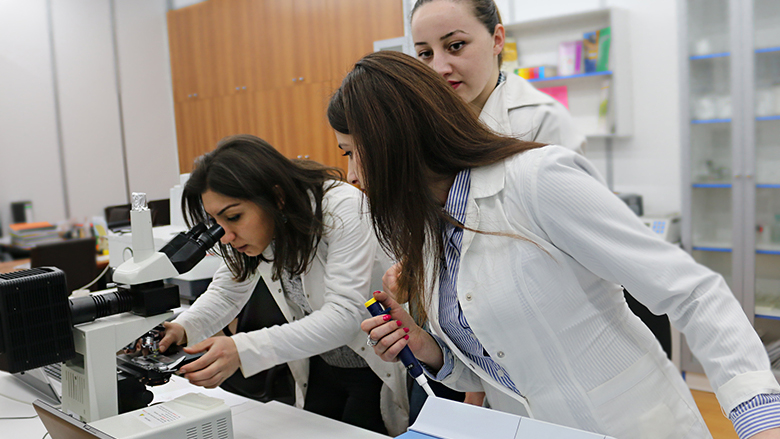 These state-of-the-art labs, now found in universities all across Armenia, have been established with support from World Bank-financed education projects.

The Competitive Innovative Fund for Higher Education in Armenia was initially established under the Second Education Quality and Relevance Project. Subsequently, through a highly competitive process, the Fund disbursed grant resources to 10 universities throughout 2013-15. Thanks to the Education Improvement Project, a number of grants have recently been awarded to higher education institutions, with another 12 labs due to open by the end of 2017.