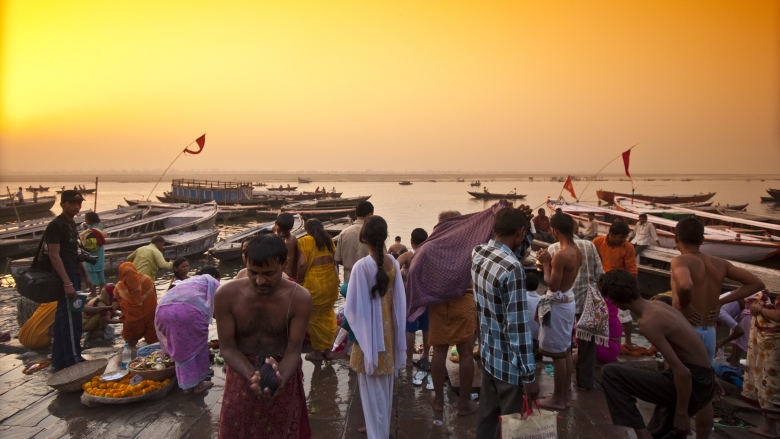 The Greater Himalaya is one of the world’s most populous regions, where climate change poses an additional risk to water security and river health.

The Himalayan Rivers of South Asia are corridors of connectivity across diverse landscapes and cultures. The region is home to around a quarter of the global population, but has less than five percent of the world’s renewable water resources. Low per capita water availability and a high relative level of water use makes South Asia one of the most water scarce regions of the world. Additionally, water storage is low by global standards, making it difficult to manage the floods and droughts that characterize the region and that are expected to increase with climate change.

Like the Himalayan Rivers, many parts of the world are grappling with growing water security challenges. How can we address some of the world’s most pressing river basin management issues?

This was underlying theme of the 19th International RiverSymposium (IRS) in New Delhi, India, which explores the challenges many countries are facing in their quest to effectively balance competing demands for freshwater resources—including urban expansion, industrialization, power generation, irrigation and domestic use. It was the first time that IRS has been held outside of Australia, highlighting the urgent and unique challenges the Himalayas are facing.

IRS is an annual event, hosted by the International River Foundation. The event provides an opportunity for river managers, policy makers, scientists, consultants, students, NGOs, community organizations, business and industry representatives from around the world, to gather together, share knowledge, learn, and collaborate on sustainable management of rivers.

The World Bank was a principal sponsor of the 19th International RiverSymposium (IRS). In addition, the World Bank was represented on the Symposium Steering Committee that oversaw the design and implementation of the event. Helping countries achieve “water security for all” is at the core of the World Bank’s twin goals to eliminate extreme poverty by 2030 and boost shared prosperity for the poorest 40 percent. The World Bank’s Water Global Practice contributes to the twin goals by investing in effective and sustainable water solutions that enable universal access, promote water security, and build resilient societies.

The 19th IRS was attended by 452 delegates, including 249 delegates from India, of which 80 were officials from Indian state and central government water agencies. The large Indian government participation was recognition of the capacity building value of the Symposium to the large technical team engaged in the World Bank-funded National Hydrology Project, which is under preparation. 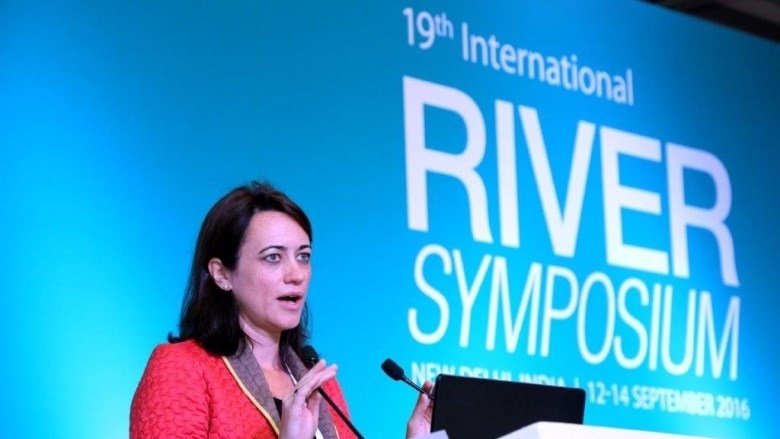 Genevieve Connors delivering the Keynote Address at the 2016 RiverSymposium in New Delhi, India 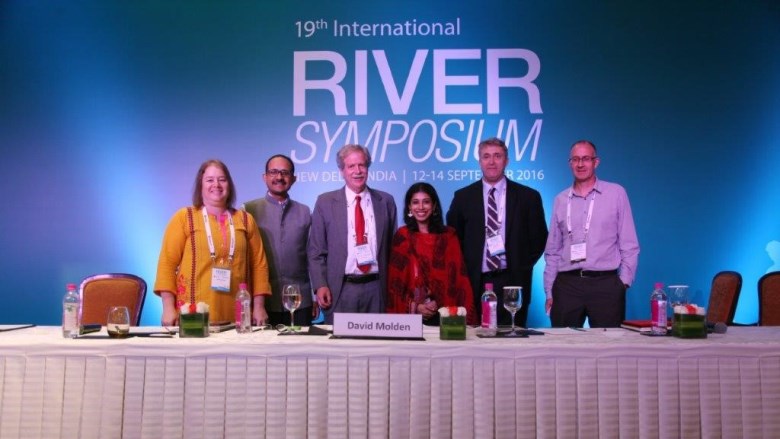 Bill Young and fellow panelists at the 2016 RiverSymposium in New Delhi, India

Bill Young, Lead Water Resources Management Specialist with the World Bank, sat on the panel for sessions on “The Role of Mountains in Water Security, Managing Drought and Water Scarcity”, and “Demonstrating the Links between Science and Policy for Basin Planning”. He presented examples of ongoing World Bank work on including improving flood forecasting lead times, river basin planning, and decision making under uncertainty.

The World Bank’s booth at the RiverExpo hall featured publications and interactive demonstrations of World Bank tools including Spatial Agent (a mobile App to access and visualize public-domain geospatial data), the Ganges Risk and Vulnerability Atlas, and the Indus GIS Mapping tool.

The Bank also convened a half-day session to explore the future of Himalayan Rivers, putting the spotlight on the challenges and opportunities in the management of three major Himalayan rivers of South Asia – the Indus, Ganges, and Brahmaputra.

Attended by more than 110 delegates, the session combined invited keynotes, a panel discussion by senior government officials, speed talks, and facilitated Q&A. The need for knowledge sharing and capacity building for effective water resources management emerged as a common theme across all discussions.

“It is important that countries understand and appreciate the need for creating a shared evidence base to manage their rivers optimally”, said Dr. Anamika Baruah with Indian Institute of Technology Guwahati, India, who participated in the session.