Farmers in a village in Herat Province see a boost in their harvests thanks to a rehabilitated irrigation system and by adopting best practices in water usage.

Enjil district, Herat Province –Haji Abdul Karim, 57, soaks his scarf in water and puts it on his head on this hot day. He walks towards a canal intake gate, his gray shirt wet with sweat. He clears the canal of any trash and shovels the gravel out from its bottom. He is tasked to inspect the canal daily to make sure it is clear and free of leaks.

“In the past, there were 70 people assigned on a daily basis in the winter to clear the canal and prepare it for irrigation,” says Haji Abdul Karim. “Now I am the only person responsible for cleaning and taking care of the canal. There is no need for scores of people to clear it anymore.” Every month one of the villagers volunteers to clean the canal.

Haji Abdul Karim is a farmer in Kushk-e-Baad-e-Saba village in Enjil district in Herat Province. He cultivates mainly wheat on his farm of 20 jeribs (40,000 square meters). The rehabilitated irrigation canal has allowed him to irrigate larger tracts of land, and he is now able to cultivate all of his farmland, compared to only 15 jeribs previously.

Prior to the rehabilitation of the canal, Haji Abdul Karim and his fellow villagers were able to irrigate only a part of their land because of water wastage. Villagers blocked the flow of water with sandbags to divert the water to their own farmlands. This became a lengthy process in which much of the water was wasted. Today, it only takes a few minutes to open or close one of the newly built metal intake gates along the canal to direct water toward a tract of farmland, preventing any water loss along the way.

Kushk-e-Baad-e-Saba village has 1,900 jeribs of arable farmland. However, village farmers were able to cultivate and irrigate only 815 jeribs of land in the past. The rehabilitation of the irrigation system has increased the area of arable land to 974 jeribs. “My crops suffered and I could only cultivate half of my land,” recalls farmer Mohammad Yasin, 75. “Now I can easily irrigate all 15 jeribs of land. Our economic conditions have improved. We earn enough to put food on our tables and, with God’s help, do not depend on anyone else.”

The reconstruction project, which included the building of the intake gates, in Kushk-e-Baad-e-Saba village took 10 months to complete and was finished in September 2014. Built by the On-Farm Water Management Project (OFWMP), the canal stretches 3,315 meters and benefits more than 330 families. The reconstruction cost was about 6.7 million Afghanis (about $96,500).

With a $25 million grant from the Afghanistan Reconstruction Trust Fund (ARTF), OFWMP works to improve agricultural productivity in project areas by enhancing the efficiency of water use. It is implemented by the Ministry of Agriculture, Irrigation, and Livestock (MAIL).

The project aims to support on-farm water management investments in five regions—Kabul, Baghlan, Herat, Nangarhar, and Balkh Provinces—covering a total of 19,000 hectares. OFWMP has implemented 35 projects in western Afghanistan, especially in Herat Province, since it began operating in 2011. 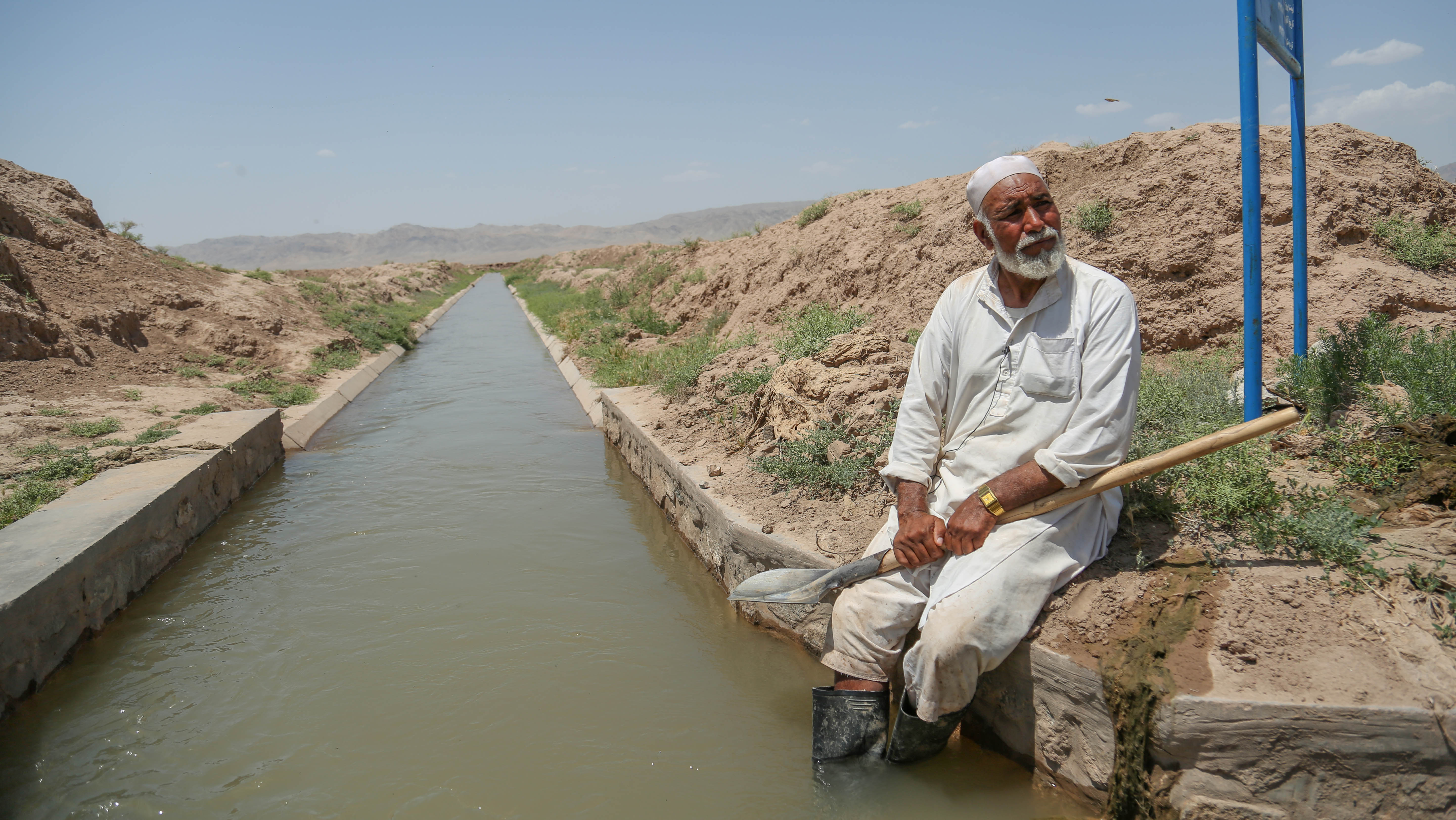 Photo Credit: Rumi Consultancy / World Bank
" Our economic conditions have improved. We earn enough to put food on our tables and do not depend on anyone else.  " 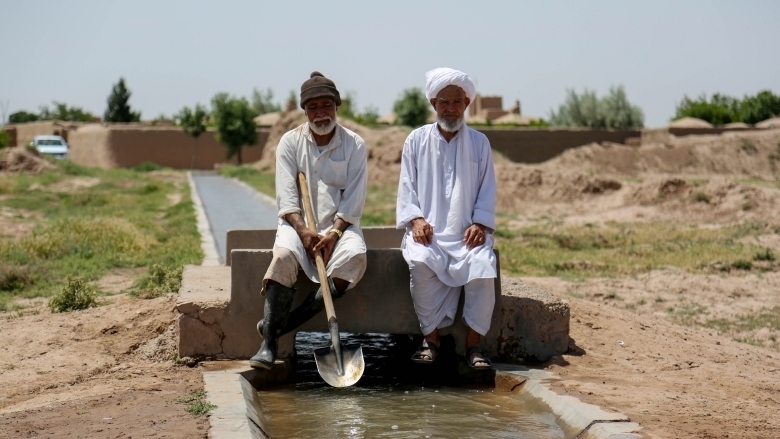 Built by the On-Farm Water Management Project (OFWMP), the canal stretches 3,315 meters and benefits more than 330 families. The reconstruction cost was about 6.7 million Afghanis (about $96,500).

OFWMP also trains farmers on best practices in irrigating their farmlands to ensure the proper use of the irrigation system. After a canal is built or rehabilitated, one of the fields in the village is leveled to demonstrate best practices in leveling farmland and facilitating better and faster irrigation.

“We used to dig deep runnels that made it difficult for our crops to get proper irrigation. Some parts of our land were over irrigated while other parts were left dry," says Mohammad Yaqoub, 45, head of the irrigation association in Kushk-e-Baad-e-Saba village. "The training taught us how to level our farmlands, which resulted in equal irrigation to all parts."

The rebuilt canal and training have allowed villagers to spend less time and energy on irrigation. “In the past, I could only irrigate my farmland once every 25 days and it took three hours for all of my land to be irrigated,” says 51-year-old Bismellah. “Now I can take my turn every eight days and it takes only 90 minutes for my farmland to be completely irrigated. At the same time, the harvest from my crops have increased from 320 kilograms of wheat per jerib of land to 380 to 400 kilograms.”

The association resolves agricultural problems in the village, including water-related conflicts that villagers previously faced. It is responsible for ensuring that water is fairly distributed to all farmlands. The association keeps a log book that has every farmers' land details and the amount of water it requires. "The association plays the role of a mediator when villagers have arguments over the water timetable," says Haji Abdul Karim.

The cost of maintenance was another issue of concern previously.  "Before the association was established, villagers argued about the amount they should pay to take care of the canal,” Haji Abdul Karim says. The issue was resolved by having every member pay 50 Afghanis (about 70 cents) for every jerib (2,000 square meters) of farmland annually, which go toward maintenance of the rehabilitated irrigation canal.