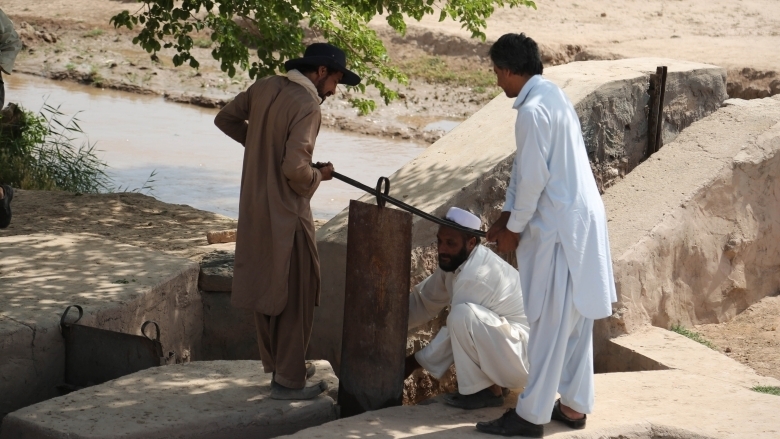 Farmers pull a steel-gate to direct water to irrigate their farm lands. They have seen a boost to their crop yields since the village irrigation canal was paved in 2014.

ENJIL DISTRICT, Herat Province – The farmer uses a shovel to direct water toward his farm, which is surrounded by farmlands and greenery except for the bare rock of the distant mountains. Nearby, a woman reaps grass and a man follows her, packing the grass into a bag. “Before the irrigation canal in our village was improved our farmlands were not as green as they are now because they usually remained uncultivated,” says the farmer, Haji Abdul Rahim, 55, who lives in Nuqra village.

Most residents of Nuqra village, which lies in Enjil district in Herat Province, are farmers and agriculture is the largest source of local income and livelihood. They have seen a boost to their crop yields since the village irrigation canal was paved in 2014. Before the village canal was paved, much of the water was absorbed into its earthen bed, leaving only a fraction to reach the farms.

“I could only cultivate five jeribs (about 1 hectare) of farmland of the 20 jeribs I own in Nuqra village due to poor irrigation in the past,” says Abdul Ahad, 40, head of the Irrigation Association (IA) of Nuqra village. “Since the canal was improved and the water began to reach my land, I am able to cultivate the entire 20 jeribs.”

The newly lined 1,200-meter long canal benefits some 2,400 people in the village. In addition to the increased quantity of water, the water flow has also increased. Local farmers estimate that it took the water 90 minutes to reach their farms before the canal was lined. This time has been reduced to only 20 minutes. A higher water flow has also meant that villagers are able to cultivate larger areas of their farmlands, leading to more harvest.

The increase in acreage due to the improved irrigation can be seen throughout the village. In total, 245 hectares of the 275 hectares of land suitable for agriculture is now cultivated, whereas previously only 204 hectares were farmable because of the limited access to irrigation. The result has been positive economic changes for the farmers and their families. 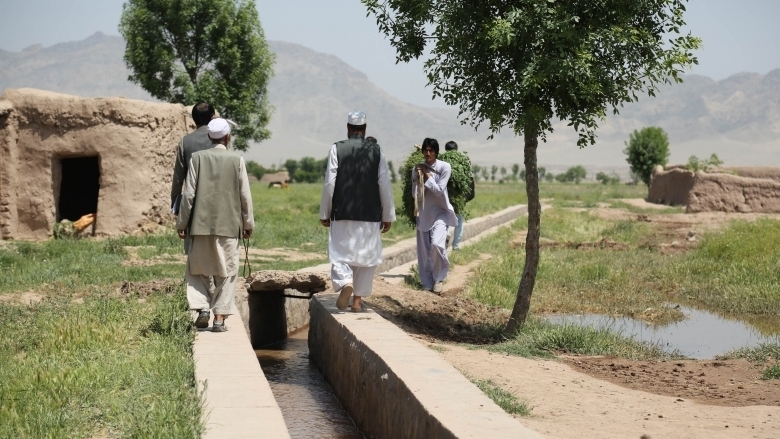 The newly lined 1,200-meter long canal benefits some 2,400 people in the village. In addition to the increased quantity of water, the water flow has also increased.

Photo Credit: Rumi Consultancy / World Bank
" Before the irrigation canal in our village was improved, our farmlands were not as green as they are now because they usually remained uncultivated.  " 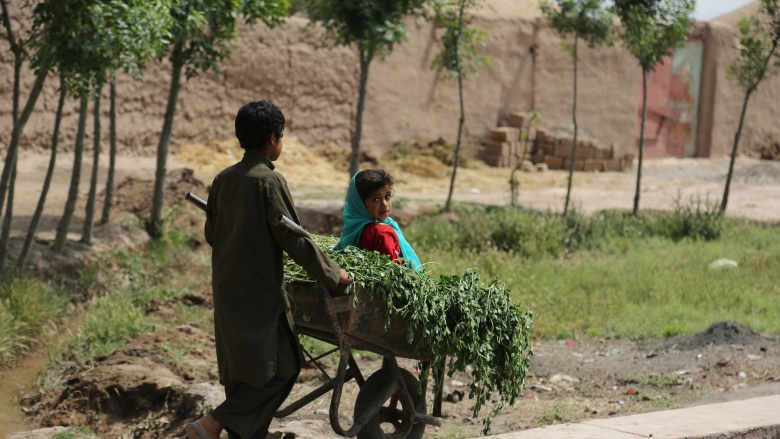 A higher water flow has also meant that villagers are able to cultivate larger areas of their farmlands, leading to more harvest.

Enhance efficiency of water use

The improvement of the Nuqra village canal was undertaken as a sub-project of the On-Farm Water Management Project (OFWMP). With a $70 million grant from the Afghanistan Reconstruction Trust Fund (ARTF), OFWMP is implemented by the Ministry of Agriculture, Irrigation, and Livestock (MAIL). It works to improve agricultural productivity in project areas by enhancing the efficiency of water use.

The project aims to support on-farm water management investments through the five regional offices—Kabul, Baghlan, Herat, Nangarhar, and Balkh Provinces, covering a total of 19,000 hectares. It has implemented 35 projects in Herat Province since it began operating there in 2011.

The benefits of the improved irrigation canal have been multiple. It has also led to a saving of time and energy spent on maintenance of the canal. In the past, villagers had to remove mud from the canal annually, as water could not reach their farmlands otherwise. “Fifty villagers were assigned to clear the canal each winter and prepare it for the upcoming spring,” recalls Abdul Ahad. In the event of early spring flooding, the canal often required multiple cleanings per year, taking away the time and energy farmers could spend on their crops.

Another important outcome is the increase in land productivity. “Before the canal was improved, every one jerib of our land yielded 400 kilograms of wheat,” says Haji Abdul Rahim. “That same piece of land now yields 700 kilograms of wheat.” Since improving the irrigation canal, farmers have begun to use fertilizers to further increase their crop output and economic opportunities. 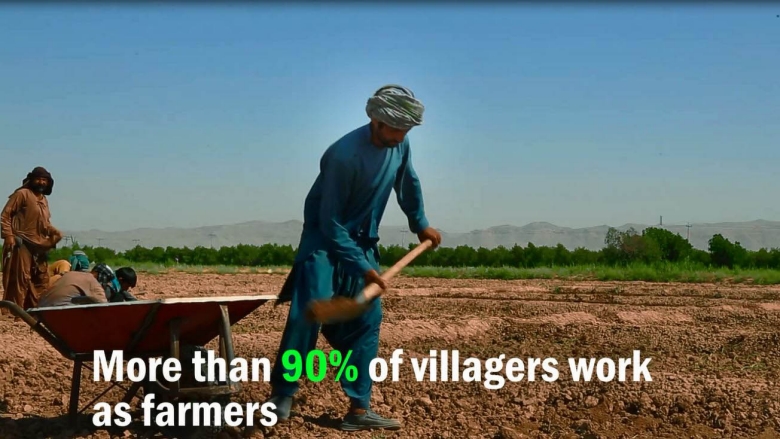