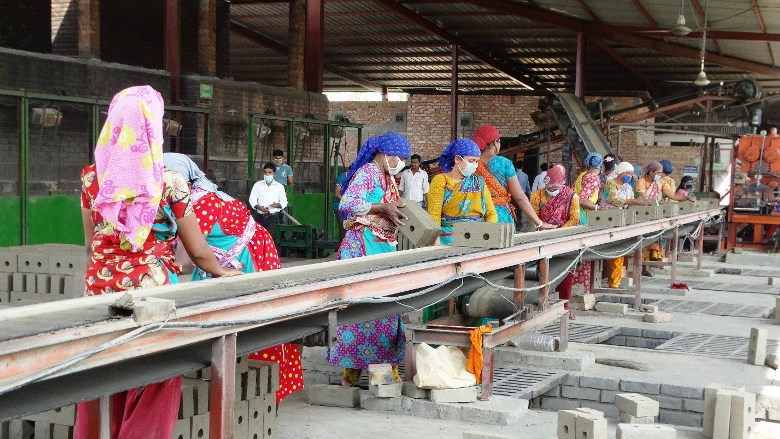 Hafiza’s life in the brick kilns of Bangladesh is a story of before and after.

Once she was like the thousands of seasonal workers who labored in searing conditions under the five-story smokestacks of fixed chimney kilns spewing so much coal dust and other pollution that it killed surrounding vegetation.

Temporary housing lacked access to clean water or local health care, and families like hers moved around in search of other jobs when the kilns shut down during monsoon.

“Before, I worked sporadically on various jobs throughout the year — in the fields, in traditional kilns, on construction sites or as a household helper,” said Hafiza, who is from the impoverished Jamalpur district. “I was low paid and never certain about the next job or income.”

A Before and After Story

Today, Hafiza works in a different kind of brick kiln under a project supported by the World Bank Group.

It uses new technology to operate all year while emitting half the pollution. Full-time employment means more money and a permanent family home. Additional money generated by the kiln’s reduced carbon emissions pays for regular health care, new bathrooms, a dining area and other improved facilities.

“Now, I know that I have a job throughout the year and how much money would bring home at the end of the month,” Hafiza said. “The jobs in these kilns are not only far less tiring … but also more stable and earning a higher income than before, similar to men.”

“This project is a model for the kind of development needed to achieve World Bank Group goals of ending severe poverty, increasing shared prosperity and transforming economies and societies to a low-carbon future,” said Sandrine Boukerche, a World Bank carbon finance specialist, who recently traveled to Bangladesh.

Brick production is a mainstay of the economy in Bangladesh, one of the poorest countries in South Asia. As rapid urbanization brings more construction and demand for bricks, the booming industry hires vulnerable workers like Hafiza at the traditional fixed chimney kilns concentrated around urban areas.

and other environmental pollutants into the atmosphere each year, causing a harmful impact on health, agricultural yields and climate change. Workers, many lacking shoes or protective gear, earn very low incomes under harsh conditions due to poor and rarely enforced labor standards.

Originally developed in Germany, the HHK technology was imported to Bangladesh after improvement by the Chinese and now has been redesigned to suit local soil conditions, humidity levels and climate. It deploys a mix of pulverized coal and clay to improve the quality and proper burning of the bricks. In addition, the waste heat from the kiln is collected and re-used to dry the green bricks before they enter the kiln. Due to those innovations, HHKs use only half the amount of coal compared to fixed chimney kilns and trap coal particles inside the brick to prevent them from becoming air-borne fly ash. 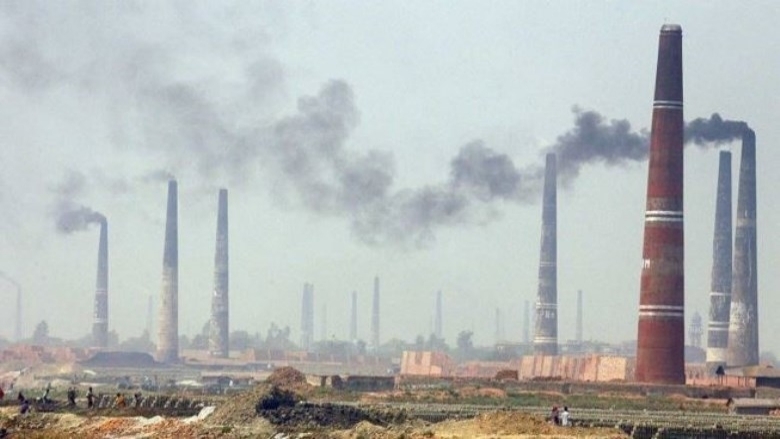 Fixed chimney kilns are one of the main polluters in Bangladesh.

Registered as Clean Development Mechanism (CDM) projects under the United Nations Framework Convention on Climate Change (UNFCCC), they are expected to cut emissions each year by about 75,000 tCO2e per year, the equivalent of taking 15,843 American passenger vehicles off the road.

Because the HHKs reduce carbon emissions, they earn certified carbon credits (CERs) sold to the World Bank Group’s Community Development Carbon Fund (CDCF) and the Danish government. To date, credits for about 67,000 tCO2e have been issued and another 53,000 tons are being verified.

Revenue for the carbon credits brings kiln owners an additional stream of money, with some earmarked for community benefits for workers. The carbon money pays for twice-a-month doctor visits, separate on-site toilet and washing facilities for men and women, dining facilities and safety gear including gloves, boots, masks and helmets. Such benefits and facilities don’t exist at the traditional fixed chimney kilns.

Other advantages include mechanization that reduces hard labor to enable equal pay for women, roofing to protect workers from the sun, and better air quality that allows workers to grow crops around the kiln sites.

Collateral benefits provide more opportunity for some of the most vulnerable people in Bangladesh — poor women like Hafiza or Basana, who also works at one of the project kilns. Along with better pay, less demanding labor, regular health care and improved facilities, Basana can now send her 11-year-son to an English-language school.

On average, an HHK kiln can produce 15 million bricks a year -- compared to four million by a fixed chimney kiln — while reducing pollution by 50 percent. However, HHK technology costs up to 15 times more to build than traditional kilns.

Carbon finance tools and mechanisms played a catalytic role to create incentives for the first entrepreneurs to adopt cleaner brick technology and provide additional comfort to financial institutions willing to loan money at a rate applicable to prime customers.  Now more clean brick technologies are emerging and labor standards continue to improve in response to the World Bank’s trail-blazing project and other programs supported by the Bangladesh government, the World Bank Group and other development partners.

In addition, the government in 2014 imposed a ban on the new construction and operation of existing fixed chimney kilns near residences or forests, further bolstering the expansion of HHKs and other climate-friendly technologies.

Despite the progress, more needs to be done, with estimates of a $3 billion price tag to build the 1,000 HHK or other advanced-technology kilns necessary to replace existing traditional kilns.

The Paris climate agreement reached last year at COP21 and signed by more than 175 nations includes national plans for embarking on the economic and social transformation from reliance on fossil fuels to using cleaner energy sources.

“Now the challenge is to build on this and other models to make the commitments of the Paris Agreement a reality on the ground in coming decades,” said Vikram Widge, outgoing head of the World Bank Group’s Climate and Carbon Finance unit.