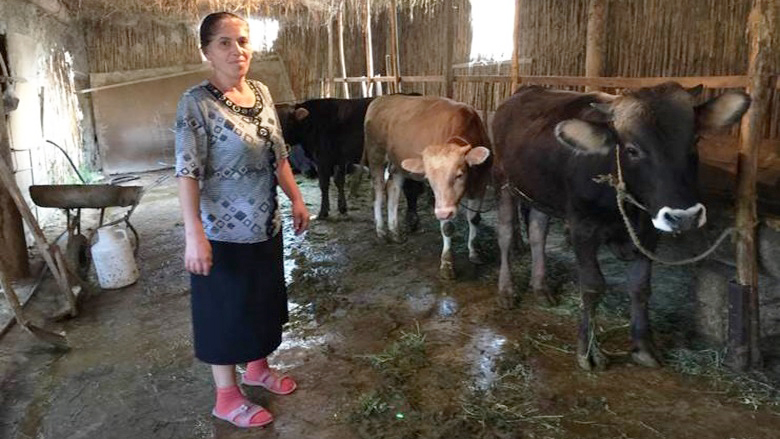 In Quazanli, a small town in Azerbaijan’s conflict-affected Agdam region, 10,000 out of the 14,000 residents are internally displaced. Forced to leave their homes almost 20 years ago, these people live today in temporary, deteriorated housing: many families have just a single room for eating, living, and sleeping, and often share a bathroom and kitchen facilities with up to twelve other families.

The make-shift buildings, none of which were originally intended for housing, have limited access to electricity and gas, are poorly insulated, and have accumulated mold and moisture throughout the years.

While such poor housing conditions are a major challenge for internally displaced people in Quazanli, they are mostly concerned with finding a reliable source of income and gaining a better livelihood. Many individuals came from areas of the country where livestock-rearing is the main source of livelihood, and they yearn to be able to return to their former occupations.

Some families have even been able to save and buy some livestock that provides them with milk and cheese, but the lack of financing has made it impossible for most to buy more than a single cow. Without the opportunity to breed the animals, these families have not been able to significantly improve their situation. A single cow provides only the most meager source of income, and this income could disappear in an instant if the cow became ill.

In 2013, a dozen community members from Quazanli applied to the Azerbaijan IDP Living Standards and Livelihoods Project to participate in an income-generation program. This program, aimed at improving living conditions and increasing the economic self-reliance of IDPs, helps to create community income generation groups that receive intensive support to identify and start up small-scale businesses.

Businesses are varied in nature but usually build on the skills that IDPs brought from their communities of origin, including cattle husbandry, sheep rearing, and crop production. The project has also financed the opening of bakeries, retail shops, catering businesses and cafés. 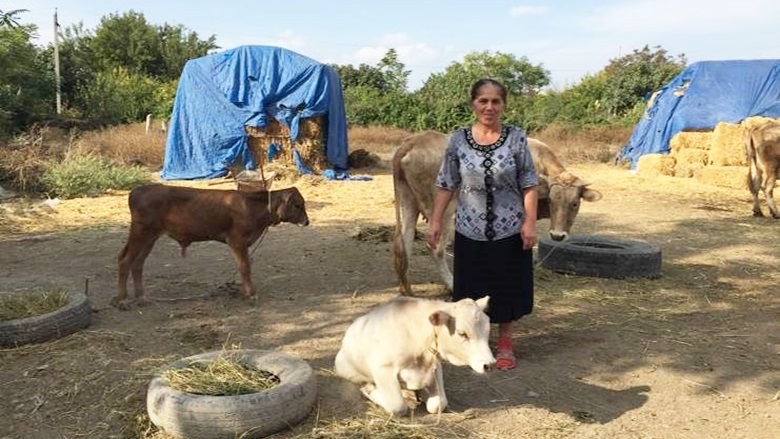 Results from the Quazanli income-generating group are exciting. With a grant of $9,300, the group purchased 6 cows and fodder. Within a year, the herd size expanded to 11 cows and the community applied for a loan from the National Fund for Support of Entrepreneurship, and purchased an additional 5 cows.

Currently, the milk and cheese produced from the animals can be sold locally, and demand is always high. By selling milk from 6 cows, the group makes about 140 Azerbaijani New Manat (about US$ 92 per week). Within 2 years of project initiation, the average household income has almost doubled for members of the group, mirroring the 50% increases in incomes and 100% business success rate reported for other similar groups funded by the project.

In addition, food security has greatly increased, as families now have a stable source of dairy products and meat. Access to cash also makes it possible for families to save, invest, and fund opportunities such as education and needs such as basic health care.

Because 70% of group members are women, the program has had a great impact on enhancing women’s role in the communities. In fact, female participants say they now feel more at ease participating in community activities.

On June 17, 2016 the World Bank approved additional financing to the Azerbaijan IDP Living Standards and Livelihoods Project. The US$ 66.7 million allocated to funding small and medium-sized infrastructure, as well as income-generating activities, will continue helping communities such the one in Quazanli.

Overall, the project will be able to support a total of 371,000 IDPs in improving their living standards and livelihoods. Benefits are expected to contribute to the overall well-being of these populations and the communities that host them, and to provide a good model of local, rural economic development for the rest of the country.

The Azerbaijan IDP Living Standards and Livelihoods Project, approved in 2011 in the amount of US$ 50 million, was designed to comprehensively tackle the most important issues faced by IDPs by funding social, community-based infrastructure and financing improvements in housing conditions for the most vulnerable IDPs.

Community-driven approaches, such as the one highlighted here, underpin the project design and enable the project beneficiaries to make decisions about development priorities in their own communities.