People in East Asia Pacific share how they’re preparing for retirement and talk about their biggest concerns as they face old age.

East Asia is graying quickly, but to people like 60-year-old Toi in Thailand and 58-year-old Junghye Sohn in Korea, getting older doesn’t necessarily mean it is time to slow down. They are worried about paying the bills as they age – especially once they are no longer able to hold down a job.

“I am most concerned about money,” says Toi, who lives in Thailand’s Kanchanaburi province. “Obviously, my body is still functioning so I can work every day. Once I get older, I probably cannot work and I am not sure that my family or grandchildren will be taking care of me when that day comes.”

Sohn lives far from Toi, in Incheon, Korea, but she is also worried about the future and says as she ages she is most concerned about her health. “I want to stay healthy so that I can keep working and earn a living.”

East Asia is aging faster – and on a larger scale – than any other region in history, which could lead to a steep drop in the size of its workforce and a sharp increase in public spending on pensions, health care and long-term care in the coming decades, according to a new World Bank report, Live Long and Prosper: Aging in East Asia and Pacific.

Even though older people generally have benefited from the region’s economic growth, poverty rates tend to increase more with age in countries such as China, Indonesia and Vietnam. Poverty among the elderly is also more common among the less educated, those with fewer adult children to depend on, and those with limited social security benefits.

The tradition of relying on family support in old age is starting to erode in many countries, the report says. In Korea, less than one-third of older people live with their children. In China, 43 percent of those aged 65 to 70 live with their children, down from two-thirds in the early 1980s. In the region, many elderly people are left in rural areas to care for young children, as their adult children move to cities for better paying jobs.

Many older people in the region depend on their own work – not family and state support – as their primary source of income. A large share work well into their 70s, even in richer countries such as Japan and Korea, but working is a necessity for rural residents without pensions in developing East Asia. At the same time, some urban workers, especially women, often retire too early due to the incentives built into pension and taxation systems.

Hongying Guan, a 56-year-old from Beijing, is already officially retired and is receiving about $500 equivalent as a monthly pension. But she is still employed as an hourly worker to add to her nest egg.

“What I am concerned about is that when I get older and cannot take care of myself, or if I get sick and my children have to work and cannot care for me, there is nobody to take care of me,” she says.

People in East Asia expect the state will play a bigger role in supporting them in their old age, for example by providing care for the frail and incapacitated, the report says. How the states meet that expectation will be a key social and political challenge in coming years.

To address the increasing strains an aging population poses on public services, the report calls for a paradigm shift in the way that health, pensions and long-term care are provided and financed across the region. Without reforms, public spending on pensions is projected to rise by eight to 12 percentage points of gross domestic product by 2070. But reforms – like phased increases in official retirement ages – have the potential to control costs while ensuring adequate benefits. Labor market policies also need reform to help offset the decline in working age population as rapid aging takes hold.

Until then, much depends on individual workers. Ruizhong Liu, 59, expects to get a pension of about $500 a month after he retires next year.

"When I get older, I plan to use my pension to hire a nanny to care for me. Or my wife and I can choose a proper elderly home. We both have pension and medical insurance, which can meet our basic living expenses and medical needs,” he said. 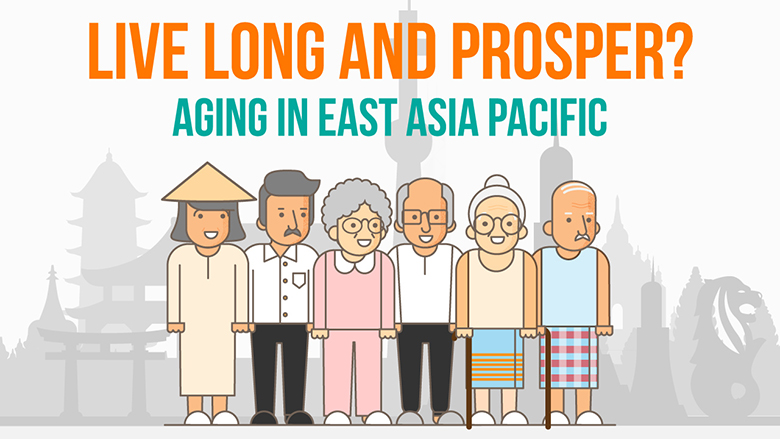