Using the Power of Fashion to Counter Gender Violence

WEvolve is a global campaign bringing men and women together to end inequality using the power of art and media to inspire action and change. We Unite. We Challenge. We Change. WEvolve.

What is the World Bank doing sponsoring a fashion show, as models sashayed in various shades of blue down the ramp in Mumbai, India, this March?

The event, called the Blue Runway, marked the launch of the Bank’s WEvolve program, which aims to empower young men and women to challenge societal norms that lead to gender-based violence. The color blue was used to represent a call to action against gender-based violence – from both men and women – and the program uses power of the creative industries – including fashion, digital and social media, performing arts, film, music etc. – to create awareness and drive social change.

The concept was visualized by Maria Correia, Manager for Social Development in South Asia, and one of the Bank’s leading advocates on gender issues. It is based on the premise that young people can ‘evolve’, develop new attitudes and behaviors, and build healthy relationships that reduce the risk of gender violence.

While the subject is still taboo in many parts of the world, the statistics point to a grim reality: the World Health Organization (WHO) estimates that more than one billion women – or 35 percent of women worldwide - have faced, or will face, intimate partner violence or non-partner sexual violence in their lifetime.

And the problem does not affect just women alone. Violence against men, which is both under-researched and under-reported, is a closely related issue. 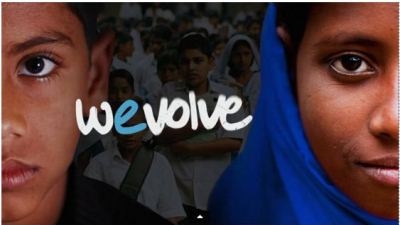 " I want to call on all men and boys to be a catalyst for change and, through our actions, create a value system to end gender disparity. "

Calling young people to action through the creative arts

The Mumbai show had all the makings of a blockbuster. Hollywood actor Rosario Dawson and an all-star Bollywood cast – Kajol, Huma Qureshi, Sridevi, Deepika Padukone, Jacqueline Fernandez and Farhan Akhtar, to name a few – came together in a strong show of support.

The clothes were designed by one of India’s leading fashion designers - Manish Malhotra - and the front row seats were packed with well-known designers and some of India’s most prominent personalities from the social, media and entertainment worlds.

While the models carried banners about empowerment and equality, the stars talked and tweeted about the issue.

“Young men and women have the opportunity to influence, challenge and change social norms,” said Correia. “Today’s social media and the fast-growing digital world give them a reach and power that is unmatched in history. WEvolve helps to open their minds and provides them the tools and language to become the leaders of a new era, engage their peers and elders, and think and act differently.”

Designer Manish Malhotra  explained the role that fashion can play in helping addresses gender violence: “Fashion has a comprehensive and universal appeal and can be a powerful instrument to raise awareness and promote action.”

But WEvolve is not just about fashion.  WEvolve’s social media channels have been effective in getting young South Asian men and women to engage in a discussion about social norms and violence. The series of videos have seen over 400,000 views combined, and reached over 3.5 million people across the globe.

WEvolve has also reached out to local partners such as the New Delhi’s Pearl Academy of Fashion, engaging students and their creative talents on the important issue of gender violence.

Another innovative aspect of WEvolve is its focus on engaging men. This diverges from conventional gender programs in two important ways.  First, it goes beyond the traditional focus on women by targeting men directly and not simply “including” or “engaging” them.  Second, it not only empowers women – it empowers men too, but not by giving them more power over women; rather by empowering them to challenge prevailing gender norms of behavior.

“At WEvolve, we believe that men are integral to the change process, and understanding what drives them to use violence is central to halting it,” said Gary Barker, director of Promundo, a WEvolve partner, and a leading voice on engaging men and boys for promoting gender equality.

This approach is already proving successful as, interestingly, the majority of the people who are registering and commenting on the program’s Facebook page and website are men (www.wevolveglobal.org), said Hiska Reyes, the program’s coordinator.

WEvolve’s South Asia team is already establishing new partnerships with creative organizations. This includes Ram Devineni, a New York based filmmaker and publisher, who, deeply affected by the heinous rape that rocked India in December 2012, created the reality comic book ‘Priya’s Shakti’ – or Priya’s Power.  The comic shows how Priya, a rape survivor and now a new Indian “superhero”, motivates people to change their ways through the power of persuasion. (The comic received the 2015 Tribeca Film Institute New Media Fund from the Ford Foundation.) With Ram, the WEvolve team is exploring the design and implementation of comic book workshops in schools and communities across India where young men and women can talk about the issues affecting them, particularly gender violence, while engaging in a creative medium.  Other initiatives include engaging the garment

As WEvolve unfolds and spreads beyond South Asia, it hopes to encourage more people to speak up, share inspiring stories, and take strong action to end the scourge of gender violence.

WEvolve: Why is Gender-Based Violence Acceptable?