10 Years After the Tsunami

In 2004, a tsunami in the Indian Ocean sent massive waves that destroyed parts of Indonesia, Thailand, Sri Lanka and India, causing billions of dollars in damage.

One of the hardest hit places was Indonesia’s Aceh province, which was leveled by the tsunami. More than 221,000 men, women and children were killed.

Ten years later, a panel reflected on what was lost and what was learned from the experience at a webcast event, 10 Years after the Tsunami in Aceh: Rebuilding Better from Disaster. The event was followed on Twitter with #buildbackbetter.

World Bank Managing Director and Chief Operating Officer, Sri Mulyani Indrawati, was the planning minister in the Indonesian government at the time when she flew to the devastated province. “It was unbelievable,” said Indrawati, who was overcome by emotion as she recalled the devastation to her country. “The whole city was destroyed.”

The province was totally isolated without communications or infrastructure. The local government was paralyzed as many officials had been killed in the disaster or were coping with family losses.

Recovering from the disaster required much more than rebuilding structures, said Indrawati. "It was not just brick and mortar, but rebuilding society,” she said. “When you talk about rebuilding Aceh, you needed to rebuild people’s spirits.”

Axel van Trotsenburg, the World Bank’s vice president for East Asia and the Pacific, said the World Bank Group learned a lot from the crisis “Speed is extremely important, because so many people are suffering,” he said.

It’s also important to be involved after the immediate emergency. “We would be there from day one, but we would be there also for the long-term” providing technical and financial assistance – which is “reassuring for governments,” van Trotsenburg said.

East Asia and Pacific is the “most disaster prone region in the world and the frequency of disasters is increasing,” he said. And the costs of such crises can be devastating, with losses to GDP of up to 30%, hitting the poorest the hardest.

" It was unbelievable. The whole city was destroyed. " 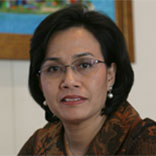 The Bank’s former Indonesia Country Director Andrew Steer was celebrating Boxing Day on December 26, 2004, with his family in Australia when the tsunami hit. By Day 4, the true magnitude of the devastation was realized. He told the audience that his work during the crisis was “the most difficult and emotional” of his career.

Joel Hellman, who was then the Bank’s senior governance advisor in Indonesia, got a phone call at 10 p.m. a few weeks after the tsunami from the commissioner of the Anti-Corruption Commission, summoning him to his office.

At that meeting, the commissioner told Hellman that the newly elected government in Indonesia would be judged by how it would spend the billions of dollars coming from all over the world to help the victims of the tsunami. “We have this tremendous opportunity,” which will make or break the trust in the government, Hellman said.

The Reconstruction and Rehabilitation Agency was created to coordinate the rebuilding of Aceh, promote transparency and avoid corruption. A weekly “bottleneck” meeting was established to address inefficiencies while “injecting urgency into the process,” Hellman said.

Steer recalled Indrawati summoning the donors together asking for a multi-donor trust fund so that all the agencies could coordinate and work together to rebuild Aceh.

Joe Leitmann, the former manager of the multi-donor fund, said there were three key lessons learned from the crisis:

Today, Leitmann is lead risk specialist in the Urban, Rural and Social Development Practice and used some of the valuable knowledge that he gained managing the tsunami crisis in Haiti after the earthquake struck. Bank Group funds were used to focus on gaps such as debris disposal, which other donors weren’t addressing. Leitmann also said they learned what didn’t work. Donors setting “preferences” for how their money will be used, “hampers the ability to engage in reconstruction outright,” he said.

Indonesia: Rebuilding After The Disasters in Aceh and Nias