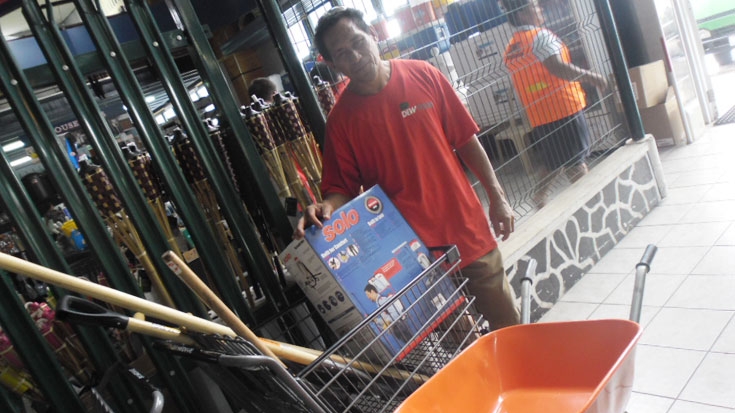 Apia, Samoa, December 11, 2014  – It has been nearly two years since tropical Cyclone Evan slammed into the Pacific Island nation of Samoa to devastating effect. During Evan’s peak, heavy rain and winds of up to 170 kilometers (105 miles) per hour caused storm surges and four meter (13 feet) high waves.

According to a post-disaster needs assessment completed by the World Bank shortly following the cyclone, the country’s agriculture sector was hardest hit. More than 7,000 families on the island of Upolu lost crops, livestock, and farming equipment, and many communities continue to be affected by the loss of income.

Leituala Afa is a vegetable farmer in village of Nuusuatia in one of the worst affected areas. He says that the biggest need in the community is reconstruction – materials like fencing remain a considerable expense for most households. Other people are rebuilding in safer locations away from the river.

“When the cyclone struck, the whole area went under water,” he says, “The storm destroyed fields and farms. Trees came down and ruined shelters. Most of the water pipelines were broken.”

“The access road was knee-deep in water, taro was scattered on the ground, and bananas were thrown out to the sea. Today, people have started to recover but not to where they were before. They still need to rebuild,” he adds.

Earlier in 2014, a small-scale pilot project tested an innovative e-voucher program which provided grants to 400 households in five villages on the island of Upolu. These funds enable farmers like Leituala to rebuild damaged livestock shelters, restore fencing, purchase planting materials, and invest in new equipment and tools.

Supported by Digicel Samoa, the unique e-voucher payment system piloted by the government makes use of simple mobile phone technology to provide vouchers to affected families.

The system works by transferring funds to mobile phones that have been given a specialized chip. A tailored system then allows purchase of more than 5,000 pre-approved “whitelisted” items from designated vendors. Items authorized for sale from hardware and specialist stores include farming and fishing equipment and building materials.

It’s the first time that this type of technology has been used in the Pacific and its appeal is undeniable. The potential for misuse is reduced by linking whitelists to point-of-sale systems. Paperwork is minimized and electronic databases facilitate reliable monitoring and evaluation.

“The technology is absolutely cutting-edge yet simple to use,” says Francis Thomsen, Chief Operating Officer at Digicel Samoa. “Mobile Money or Mobile Wallet technology is considered a key innovation for broadening access to financial services for the most remote and rural communities. The solution can also ensure that those in need of assistance receive monetary aid within minutes.”

" The solution can also ensure that those in need of assistance receive monetary aid within minutes.  "

Technology for the Future

Developers say that the new system could enable targeted payments across the Pacific, where access to mobile phones has recently escalated to reach more than two million people. Additionally, the technology could be used not only for rapid disaster response, but also for social or other insurance, or services delivery.

Building on the success of the pilot program, the project is rolling out the e-voucher system to a total of nearly 7,400 farmers and fishermen, many of whom will have received funds by the end of this year. This will provide a significant boost to agriculture production and subsequent incomes, helping Samoa to build a more resilient agricultural sector for the future.