A small patch of barren land was all that farmer Ningappa Hulikatti had ever known. He tilled the hard dry soil to the best of his ability to support his wife and 5 young children. But, without water, his fields yielded only a small crop of millets in the rainy season, bringing in a mere Rs 20,000 a year.

Now in his mid-forties, Ningappa looks out proudly across the same brown earth, now flecked with deep shades of green.  Fruit and flowers flourish, yielding a bountiful harvest of chickoo, mangoes, and roses.

The change in Ningappa’s fortunes came about in 2006 when the Karnataka government’s Sujala Project- meaning sweet water – supported by the World Bank, helped him and other small farmers store monsoon rain water by building small works such as bunds and farm ponds at appropriate places.

The placing of bunds and farm ponds, as well as the planting of trees, was scientifically devised for each micro-watershed on the basis of remote sensing images and maps, soil profiles, and hydrological information. Technical teams consulted extensively with community members to customize solutions for each location.

By harvesting both rain and surface water, farmers were able to cultivate higher-value cash crops,  turning their lives around.  In about 3 years’ time, Ningappa’s income grew five-fold, enabling him to purchase a tractor, renovate his home, give better schooling to his children, and put away money for his daughter’s marriage. Ningappa’s family now needs to help him in the fields - his five children lend a hand after school - and extra hands need to be employed during peak ploughing and harvesting time.

The project has also developed horticulture and forestry in an integrated manner. Ningappa, for instance, has planted valuable teak trees around his water pond, which together with his turmeric and tamarind crop, will add further to his earnings. In 20 years’ time, when the teak trees have grown to their full majesty, each trunk will fetch a handsome price of Rs. 100,000, providing a much-welcome boost to the family coffers.

To ensure that landless families were not left out, Sujala also provided microfinance to village women to set up small enterprises.

Nagamma Mashetty (30) took a loan from her local Self-Help-Groups (SHG) set up under Sujala to purchase a sewing machine. The income she generates as a seamstress has helped her family buy 2 buffaloes, educate their two young daughters, and repay the loan.

Nagamma Mashetty (30) took a loan from her local Self-Help-Groups (SHG) set up under Sujala to purchase a sewing machine.

World Bank
" They were liberated from traditional roles as silent homemakers to become, in many cases, the sole providers of domestic needs. This enabled many families to break free on their own from the age-old shackles of poverty. "

40 year old Paravva Chinnappa Jawoor has seen her life change markedly. Before she joined the SHG, her illiterate family saw no advancement at all, and could not afford to educate their children.

Today Paravva earns a living making vermicelli with a machine bought on loan from Sujala, together with some private borrowing.

In the eight years she has been with the SHG, she has gained the confidence to deal with people outside her village, learnt how to run a business, can sell her wares in nearby Hubli town, and is generally self-sufficient.

The SHGs have also worked to improve village conditions.  The Rynal village, for instance, the local school now has computers and better hygiene, and drinking water is available through a tap for 2 hours a day. Once-empty wells have been recharged and several bus stops have been set up to make it easier for inhabitants to travel to the city.

“One of the most far-reaching impacts of the project was the true empowerment of women,” said Grant Milne, the World Bank’s team leader for the project. “They were liberated from traditional roles as silent homemakers to become, in many cases, the sole providers of domestic needs. This enabled many families to break free on their own from the age-old shackles of poverty.”

Altogether, the first phase of the Sujala project (2001-2009) benefited an estimated 167,000 farmer households as well as 80,000 women who were involved in over 6,000 Self Help Groups.  The second phase (2012 to 2018) is advancing this progress further by providing technical support to the government’s Integrated Watershed Management Program. 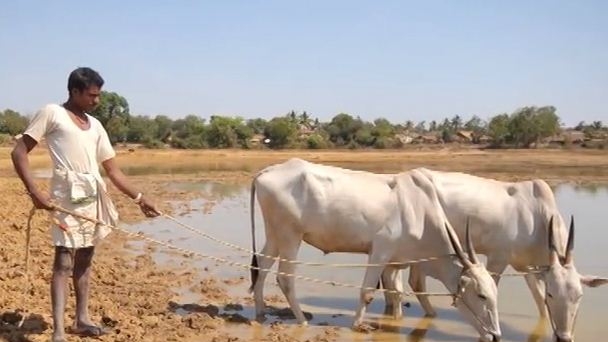