Local Currency Bonds Catch On as Countries Aim to Catch Up

Two years ago, the World Bank Group’s International Finance Corporation tried something that had never been done in the Dominican Republic. In a bid to increase access to finance to entrepreneurs and home-buyers, the Bank Group’s private sector arm became the first international agency to issue a bond in the country’s local currency aimed at raising money from Dominican pension funds for the local private sector.

The IFC “Taino Bond,” as it is known, raised 390 million pesos (about $10 million) that IFC invested in two local institutions. By 2015, FONDESA and Asociación La Nacional expect to provide $76 million in loans to people in rural areas and 10,000 fixed-term mortgages for low- and moderate-income home buyers, respectively.

Because the institutions received loans in pesos rather than a foreign currency, their clients do not have to worry that payments will go up because of currency fluctuations. And because the loans were longer-term than what was available in the markets, their borrowers also do not have to worry about rising interest rates.

But perhaps the greater benefit was the bond issue’s impact on the country’s financial infrastructure — the “capital markets” that help move money from where it is available to where it is needed.

“For the Dominican Republic to sustain its economic growth — and for this growth to be inclusive and create jobs — it is essential to develop the domestic capital markets,” he said. 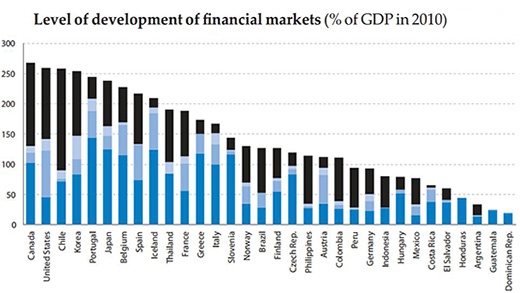 It’s a concept that is becoming better understood as countries seek ways to finance infrastructure and boost housing and other sectors of the economy needed for growth. In the wake of the 2008 financial crisis and the sudden, swift withdrawal of international financing that occurred, development of domestic capital markets has become a priority for the Group of 20 nations.

The size of domestic capital markets is seen as a barometer of the health of the private sector and the  ability of companies to obtain financing, grow, and create jobs. The Dominican Republic’s market amounted to 0.1% of GDP before the Taino Bond was issued, and many developing countries’ capital markets are as tiny. Ten years ago, China’s market was only about 3% of GDP. Today, it’s closer to 25%.

The World Bank and IFC are working to build capital markets in emerging countries. One way is through “offshore” bond sales in local currencies aimed at international as well as domestic investors.  The World Bank has issued about $8.5 billion worth of bonds in 19 currencies since 2011–including for the first time in Ugandan shilling, Thai baht, and Chinese renminbi.

IFC also is working closely with local governments, regulators, and others, to enable bonds to be issued within countries – and so build their financial infrastructure. Since 2002, IFC has issued bonds in 14 emerging market currencies around the world, and has frequently been the first international issuer in a domestic bond market, laying the groundwork — including pricing — for future bond issues.

"Local currency bond issues by prominent organizations such as the World Bank and IFC focus attention, spur activity and develop nascent markets to the benefit of local governments and companies. This issuance is one way that supranational Treasuries can directly contribute to our organizations' overall development mandate," said George Richardson, head of capital markets funding at the World Bank Treasury.

Now the pace of such local currency bond issues has accelerated amid growing interest in Africa and elsewhere.

IFC issued local currency bonds in Rwanda on May 16 and is also in discussions with other countries in Africa, Asia, emerging Europe and Latin America.

Monish Mahurkar, director of Treasury Client Solutions for IFC, said interest in the bonds and in capital markets development is up “tremendously” because on a “continent like Africa there is a great desire to catch up. Some countries are impatient enough they want to leapfrog — they don’t want to wait another 20 years to develop the market.”

Much of the impetus is the need for infrastructure. Globally, about 1.4 billion people lack access to energy; 2.6 billion don’t have sanitation. India’s infrastructure needs alone are estimated at about $1 trillion over the next five years. These infrastructure gaps require far more resources than the World Bank Group, or other global international development banks can provide.

But “huge amounts” of capital potentially can be raised to finance these needs, said Mahurkar.

“The global pool of institutional savings is at least $30 trillion. We know that money is there. And we know demand is there. The question is how do you establish a bridge between the two? And capital markets are it — that’s the bridge.”

But many countries have very small capital markets that may only be developed enough for equities or government bonds, “neither of which help invest in the financial infrastructure so private companies can borrow, grow, and create jobs,” said Andrew Cross, of IFC Treasury’s client relations in Africa.

Local currency bonds issued by IFC, a triple A-rated, supranational institution, help build capital markets by attracting investors such as pension funds that want to put their money into low-risk investments.  Such issuances are typically oversubscribed.

Preparing a local currency bond issue in a country with a nascent bond market can take several years, but IFC is hoping to cut the time in African countries by standardizing the process, said Cross.

“We don’t see them as a silver bullet,” he said. “We see them as a contribution that we can make. But the bonds have these positive consequences well outside the size of the bond.”

Added Mahurkar:  “At the end of the day, our contribution is impactful but finite. But by developing the markets themselves, we’re providing a stable mechanism for resources to flow from savings pools towards the right allocations for projects. To us, that’s a potentially much larger impact.”