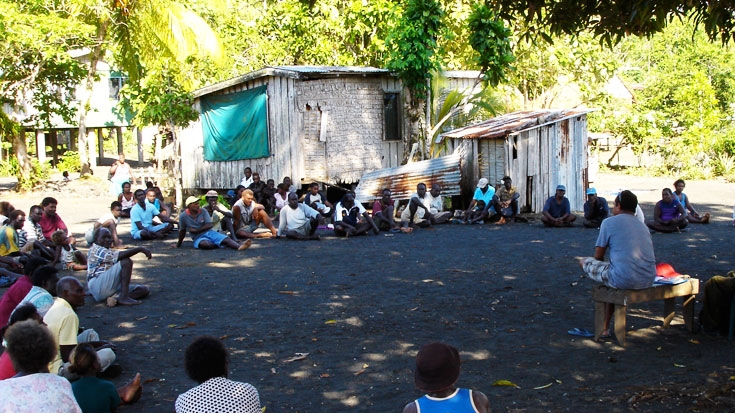 New research documents issues citizens face in accessing state and local justice systems to help provide an insight into problems experienced in contemporary rural Solomon Islands and how they are currently being addressed.

Honiara, SOLOMON ISLANDS – Imagine you have been living peacefully in a village for generations, growing food for your family in your garden, catching fish and accessing fresh water from a nearby spring. Your village has limited access to state services beyond primary school education and a small health post and has only recently been connected to the outside world via mobile phone. Honiara, the bustling capital and home to almost all government services, is only accessible via an infrequent and lengthy boat trip.

Your community is about to face massive upheaval. Arriving by barge is a large bulldozer. A scene that has played out in hundreds of villages across Solomon Islands is soon to repeat itself. Commercial logging has arrived and with it the inevitable raft of social and environmental problems. The result is a rift amongst community members over the meager financial benefits, a break-down in family relationships, the destruction of food gardens and water sources, and, ultimately, conflict.

In many places across the world, a response to such contested development might be to mobilize community resources and seek outside assistance – the services of a lawyer, paralegal, relevant government agency, an NGO or even the police.

A recent World Bank research report shows that in the vast majority of places across the scattered archipelago of Solomon Islands, these options are typically non-existent or, for one reason or another, highly problematic. More often than not, affected citizens are left without remedy.

The issues that many Solomon Islands’ citizens face in accessing state and local justice systems, such as chiefs, church and community leaders, has been documented in a research report by the World Bank’s Justice for the Poor Program, with the Solomon Islands’ Ministry of Justice and Legal Affairs. The report, ‘Justice Delivered Locally: Systems, Challenges and Innovations in Solomon Islands’, seeks to understand the type of disputes and problems affecting rural communities – the 80 percent of the population that reside outside of the capital – as well as the mechanisms that are used to obtain redress or manage disputation.

The research involved extensive community consultation across five of Solomon Islands’ nine provinces. From remote coastal and hill-top villages, where interviewees reported having never sighted government representatives outside of electoral campaigning, to the outskirts of provincial capitals, where residents had grown weary of being over-consulted by donors and government.

One of the most telling findings from the research is just how tenuous a connection the present day state has to rural communities. This is definitely the case in relation to the police and courts which, in part because of their absence, are largely marginal to the majority of the population.

Like many other geographically disparate developing countries – Solomon Islands comprises around 1,000 islands of which about 100 are populated – citizens largely rely upon their own unique governance and dispute management processes, referred to by research participants in Solomon Islands’ Pijin language as kastom.

Local governance and justice systems are highly diverse across the country. They have been shaped by Christianity and “government” and are often comprised of a blend of religious and local leaders. A common feature is that it is almost always men who play public roles in mediating and addressing community disputation.

Importantly, the research reveals just how fragile the kastom system is in many places and the difficulties it faces in dealing with newer problems. In particular, with the two key issues being experienced across the country – criminal and disruptive behavior associated with widespread substance abuse, and disputes linked to land and natural resource development, especially logging. The words of one interviewee summed up the feeling of many around land and natural resource disputes: “we don’t have any way to solve that problem now.”

The research is important in that it provides an insight into the problems being experienced in contemporary rural Solomon Islands and how they are currently being addressed.

“It is only with a good understanding of what is happening ‘on the ground’ that relevant interventions can be planned,” said Daniel Evans, Country Coordinator for the Justice for the Poor Program.

“One thing is clear,” he added, “The current configuration of state justice services alone will not be able to deliver security and justice to the vast bulk of Solomon Islands into the distant future and interventions involving a variety of partners need to be explored.”

A series of recommendations based on the Justice Delivered Locally work will be released later this year.