Cross-border Trade in Zambia: A Path to Growth and Jobs 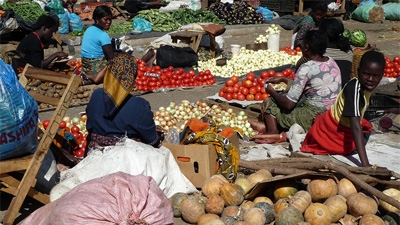 LUSAKA, October 16, 2013—Informal cross-border trade is a major feature of Africa’s economic and social landscape. In Zambia, thousands of traders cross the country’s borders every day bringing in revenues from informal trade of beans, maize or rice that often exceeds that of formal exports and imports.

Allowing traders to flourish is one of the key ways to promote growth and create jobs across Sub-Saharan Africa. Cross-border trade is also essential for reducing poverty, since the poor, including many women, are intensively engaged in the informal production and trading of goods and services.

Despite its benefits, conducting cross-border transactions remains a tough business for small traders.

In 2010, the Common Market for Eastern and Southern Africa established the Simplified Trade Regime to help traders who sell goods that do not exceed USD 1,000.00.

The Regime simplified several customs processes for traders, yet a host of registration and other requirements remain in place today. As a result, small informal traders pay 62% more in border costs than large formal traders.

Additionally, informal traders are trapped in this way of life, because should they attempt to transition to the formal market, they would pay more than double the border costs they face as informal traders.

To strengthen the rights of small traders and facilitate their cross-border transactions, the World Bank, in collaboration with the National Implementation Unit of the Ministry of Commerce, Trade and Industry of Zambia, hosted a workshop on September 19th to share the findings of the Diagnostics Trade Integration Study (DTIS) and to propose targeted areas of reform related to informal trade and trade facilitation.

The debate between local traders and policy makers, who attended the event in Lusaka, gave clear priorities for policy action.

First, the small traders called for urgent steps to reform the Simplified Trade Regime.  Despite the vision for the program, this trading tool remains underutilized due to the small cost savings it provides and the social prejudice against small traders.

During the workshops, Zambian traders shared their own personal experiences and suggestions for reforming this trade program, including:

“While the government sees the program as successful, it is important to have discussions with the private sector to come to a mutual agreement about how to reform it,” said Yvonne Chileshe, Director of Foreign Trade at Zambia’s Ministry of Commerce, Trade and Industry.

During the event, the traders and government representatives supported a Charter for Cross Border Traders that aims at improving the treatment of traders at the border and increasing the efficiency of trade flows. The goal is to post and disseminate the Charter at border crossings to enshrine a basic set of rights to traders and obligations for officials.

The clarification of traders’ rights and the responsibility of the government and the international community to support and put in place concrete measures are essential steps to easing cross-border transactions, according to Nora Dihel, Senior Trade Economist at the World Bank.

Meeting participants suggested piloting the Charter at the border between Zambia and Malawi.

The Charter’s main messages are:

“Even with efficiently functioning trade programs and charters in place, adopting a clear national logistics strategy, as well as a proactive approach to regional logistics, is imperative to lowering the high trade costs within the Zambia and across Southern Africa,” said Charles Kunaka, Senior Trade Specialist at the World Bank.

Delays at border crossings due to a lack of cross-border information exchange between border agencies and out-of-date or cumbersome transit regimes are some of the largest barriers to trade.

“Implementing regionally integrated transit systems and being proactive in interactions with neighbors to improve regional corridor performance can help reduce Zambia’s trade costs within the region and globally,” said Kunaka.  This can be achieved through harmonization of infrastructure planning and policies governing logistics services.