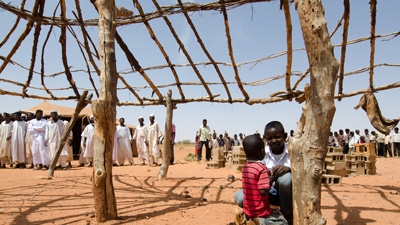 Before saving enough money to build a school made of concrete, the men of Al Awarma Village began constructing a school with local materials such as plant stalks and straw.

Al Awamra Village, North Kordofan State, March 18, 2013 – In the agro-pastoral community of Al Awamra, raising healthy animals is key to basic survival. So when the  Improving Livestock Production and Marketing Project began, the community was happy to have support for their livelihood in animal vaccinations, improved markets and a new, nearby water yard where they could take the animals to drink without fear of waterborne disease setting in.

But what they didn’t expect was the water point to turn into a thriving business. Not only does the water yard supply Al Awamra Village with water for themselves and their animals, it also provides a revenue stream. People from surrounding communities pay one Sudanese pound for a barrel of sparkling well water, and the money goes to the village.

“The water project was an agreement with the state,” said Juma Mohamed, a parent and member of the community’s development committee. “Sixty percent of the income from the water yard goes to the community, and we planned to make good use of this 60 percent.”

And plan they did. After setting aside 20 percent for water yard maintenance, the community’s development committee unanimously voted to use the remaining 40 percent to construct a school using concrete rather than local materials such as plant stalks and straw. So far, the school has one classroom and a teacher’s office, but plans are underway to build a second classroom by the start of the new school year.

Now, children like Ali Musa Mohammed, 12, don’t have to walk two hours to school and back. Before the new school was built just steps away from his home, Mohammed would set out on the long journey each day, under a blazing sun or pouring rain. Most times, he would get to school too late for breakfast. Many times, he would miss the morning assembly and the first two learning sessions. And during the rainy season, he would get to school tired, hungry and soaked to the bone.

“Our children suffered a lot for education, going this distance and back,” said Abdella Fadul, a parent and member of the development committee. “The nearest school is eight kilometers away, and there is no means of transportation. But now we have this water yard, which allowed us to start construction on a school for our children.”

The new school is just the first step in the community’s investment in itself and its members. To combat adult illiteracy, they have begun classes for women and men, including sessions on religion, ethics, values, hygiene, and health issues. Also on the list of priorities are the restocking of small ruminants and gardening for widows, a small village credit system using a revolving fund, support of petty trade and the establishment of small businesses such as restaurants, coffee shops and embroidery services.

This is exactly what Mohamed Osman Hussein, rural development specialist for the World Bank, hoped would happen.

“I tried to encourage our project team to work for empowering the communities, by strengthening their planning capacity and decision making,” he said. “By doing so, we would be sure about the ownership and empowerment of communities to make their own decision in a collective manner, and not to confine the investment to the livestock sector, since those economic or livelihood sectors are just tools for survival.”

Although Hussein said the community will need more training to continue to build on its successes, they are off to a great start and they continue to dream big. They are teaching their children to dream big, too. Dahrig Musa, 7, has decided to stop going to maseed where she was learning the Koran, and start going to basic school to learn mathematics, Arabic and English.

“I don’t want to stay at the maseed,” she told her father, Ahmed Musa. “I want to be a doctor.” She is well on her way.

The Improving Livestock Production and Marketing Project is one of 15 projects funded by the Multi-Donor Trust Fund-National (MDTF-N). The MDTF-N is a means for countries to contribute to the reconstruction and development needs of war-torn areas of Sudan. Funding for the MDTF-N ended June 30, 2013.